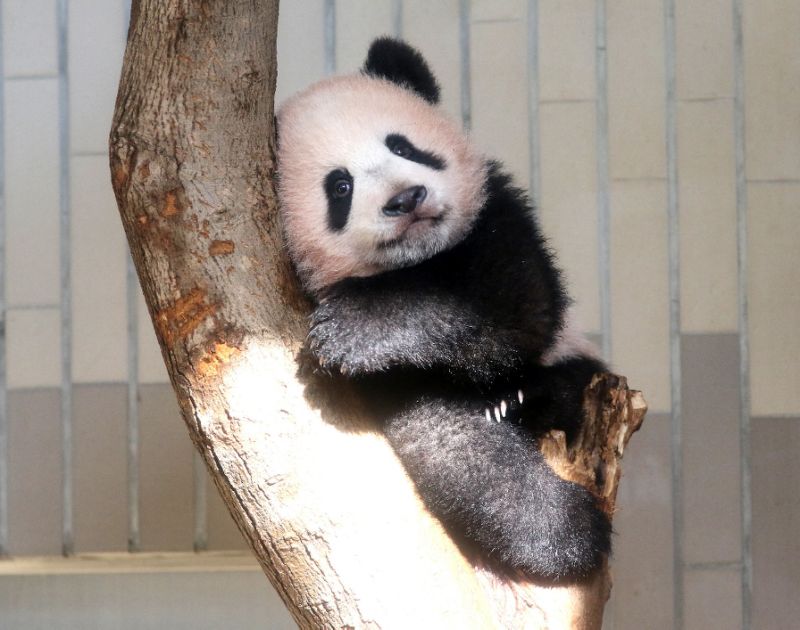 By popular demand, Tokyo's new panda cub Xiang Xiang is working extra hours from Tuesday, the latest example of overtime in a country famous for its hard-working "salarymen."

Ueno zoo's first baby panda since 1988 will be on display for an extra two hours every day until the end of January and working a full seven-hour day from February to cater to the thousands of fans of the cuddly celebrity.

Munching on bamboo shoots and nuzzling her mother, the bright-eyed seven-month-old has been the object of major media attention, with visitors clad in panda paraphernalia flocking to see her since her first public appearance in December.

More than a quarter of a million fans entered a lottery to get a first glimpse but zoo officials initially limited visitors to 400 per day during a three-hour window.

Until the end of January however, panda fans can get a first-come, first-served ticket to see Xiang Xiang, who will be on display for five hours a day.

And from February, the hours are expected to be extended again -- to a seven-hour shift -- as the zoo seeks to accommodate up to 9,500 fans of the curious cub.

Some visitors at the zoo on Tuesday were not sure whether the baby panda was ready for grown-up working hours.

Asami Sato, a 45-year-old mother visiting with daughter Yuriya, questioned whether the cub was ready for so much exposure.

"It must feel unnatural," she said, "but as long as she is happy and not stressed, I guess it's OK."

Dennis Pook, 36, an assistant manager, said the extended hours were "too much, too fast."

"I think the increase is very sudden. If they had extended the hours more slowly and let the panda adapt, it would probably be a lot better," he said.

For Chinese student Chen Gingya, 20, the most surprising part of the issue was the massive attention Xiang Xiang has attracted.

"Pandas are not much of a novelty to me back home. I think it's interesting to see people queue for so long though. The extended hours will probably help the crowd to be honest," she said.

To avoid congestion, each visitor gets two minutes to observe the cub -- along with her 12-year-old mother Shin Shin.

There are no limits for viewing Xiang Xiang's father Ri Ri in the neighbouring enclosure.