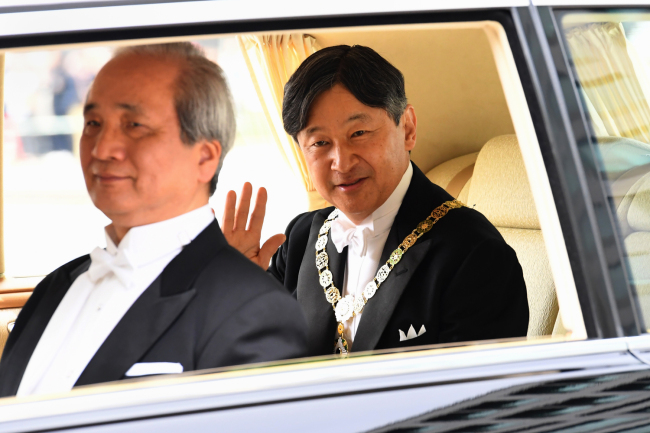 A vehicle carrying Japan’s new Emperor Naruhito (R) arrives at the Imperial Palace in Tokyo on May 1, 2019. (Photo: AFP)

Japan's new Emperor Naruhito has formally ascended the Chrysanthemum Throne on Wednesday, a day after his father abdicated from the world's oldest monarchy and ushered in a new imperial era.

Naruhito had officially became emperor at the stroke of midnight but the process was formalized with the 10-minute ritual, which is off-limits to female royals -- even his wife Masako.

It took place on the first day of the new imperial era of Reiwa, meaning "beautiful harmony", which will last throughout Naruhito's reign.

The 59-year-old was presented with the sacred imperial treasures of a sword and a jewel, as well as the seal of state and his personal imperial seal, at a solemn ceremony in the Room of Pine in the Imperial Palace at 10:30am, Wednesday.

The sole woman expected to be in attendance is the only female member of Prime Minister Shinzo Abe's cabinet.

Naruhito vowed he would always stand with the Japanese people, as he prayed for world peace in his first address to the nation later in Wednesday’s ceremony.

He swore to "act according to the Constitution... while always turning my thoughts to the people and standing with them".

Naruhito also said he would "reflect deeply on the course" taken by his popular father Akihito, who was seen as having brought the world's oldest monarchy closer to the people, especially during natural disasters.

"When I think about the important responsibility I have assumed, I am filled with a sense of solemnity," said Naruhito, 59, who took the throne after Akihito's abdication, the first in more than 200 years.

Naruhito promised to "bear in mind the path trodden by past emperors" and devote himself to "self-improvement".

He is expected to follow his father's modern style but faces a delicate balancing act in also upholding the ancient traditions of the Chrysanthemum Throne.

He will also make a public appearance on Saturday when he will again speak to the people of Japan.

But the pomp and ceremony will wait until October 22 when he and Masako will appear in elaborate traditional robes for a ceremony in the palace before parading through the streets of the capital to be congratulated by a host of world leaders and royals.