Japan's Okinawa prefecture files lawsuit against US base landfill work 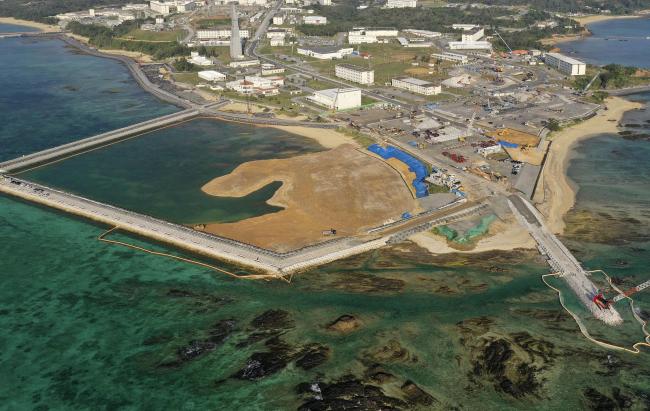 Drone photo taken Feb. 14, 2019, shows landfill work being undertaken by the Japanese government in the Henoko coastal area of Nago in Okinawa Prefecture for the planned relocation of US Marine Corps Air Station Futenma. (Photo: VCG)

Japan's Okinawa government on Wednesday filed a lawsuit against the central government and Japanese land minister Keiichi Ishii over the ongoing landfill work for US air base relocation within the southern island prefecture.

In the lawsuit, filed with the Naha branch of the Fukuoka High Court, Okinawa tried to challenge the legality of Ishii's role in authorizing the work to build a replacement facility for US Marine Corps Air Station Futenma.

According to local media, many Okinawa residents have long hoped the Futenma base would be moved out of the prefecture.The central and Okinawa governments have been against each other over the relocation issue as Okinawa has been firmly against the central government's decision to move the Futenma base from a crowded residential district in Ginowan to the less populated Henoko coastal area of Nago.

The landfill work in the Henoko area, initially approved in 2013 by former governor Hirokazu Nakaima, was strongly opposed by his successor Takeshi Onaga who died of cancer in August and failed in his efforts to revoke the approval.

Okinawa then retracted its approval for the landfill work, which was voided by Ishii in April.