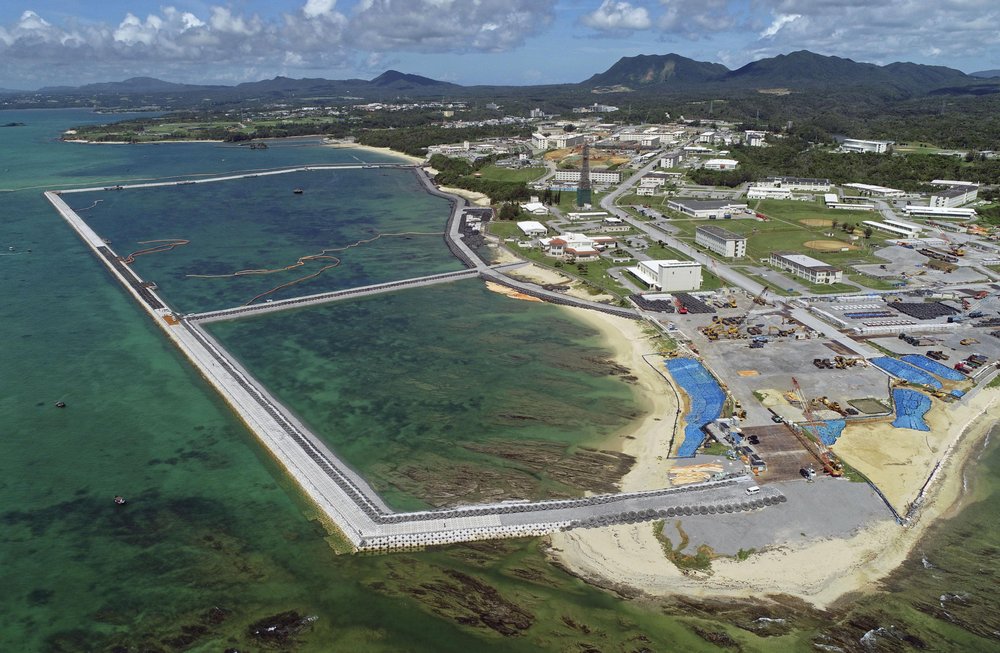 This Aug. 2018, file aerial photo shows preliminary construction work off Henoko, in Nago city, Okinawa prefecture, Japan, where the Japanese government plans to relocate a U.S. air base from one area of Okinawa's main island to another. (Photo: AP)

TOKYO, June 23 (Xinhua) -- Japan's southernmost prefecture of Okinawa on Thursday repeated its call on the Japanese government to scrap plans to relocate a U.S. military base within the prefecture.

Governor Denny Tamaki made the remarks in a "peace declaration" at a ceremony observing the 77th anniversary of the end of the Battle of Okinawa, a bloody World War II ground battle that saw more than 200,000 lives lost on the island.

At the ceremony held in Peace Memorial Park in Okinawa's Itoman, Tamaki pledged to "continue efforts to abolish nuclear weapons and renounce war, so that Okinawa will never become a battlefield again."

Tamaki also highlighted the fact that Okinawa is still shouldering the host of U.S. military bases in Japan and called for plans to relocate a U.S. Marine Corps base within the prefecture to be scrapped.

Despite continued staunch opposition from the Okinawa prefectural government and local citizens, Japan's central government has maintained its push forward with the contentious relocation of the U.S. Marine Corps Air Station Futenma in Ginowan.

Okinawa hosts the bulk of U.S. military facilities in Japan, yet the tiny sub-tropical island accounts for just a small fraction of Japan's total landmass.

Local residents in Okinawa have for decades been forced to shoulder the burden of hosting the majority of U.S. bases in the entire country and have often been the victims of the criminal activities by U.S. military and related personnel, including cases of rape and murder.

They have also had to endure a steady flow of accidents and mishaps involving U.S. military aircraft and live fire drills among others.

In addition, the new location for the U.S. base has an extremely delicate ecosystem unique to Okinawa that the locals desperately want to protect.

The overall plans for the new base involve at least 157 hectares of land being reclaimed from pristine waters off the Henoko area and the building of a V-shaped runway.

The plans stem from a pact made between the United States and Japan in 1996, with the coastal region of Henoko being selected as the replacement site for the Futenma base in 1999.

The local and central governments have long been at odds over the relocation of the base, with Okinawans calling for the new base to be relocated outside of their prefecture or Japan altogether.

According to Okinawa's prefectural government, 94,000 civilians, the equivalent of 25 percent of Okinawa's population in 1945, a similar number of Japanese soldiers, and more than 12,000 U.S. troops were killed during the savage four-month battle on the island which raged from March 1945.