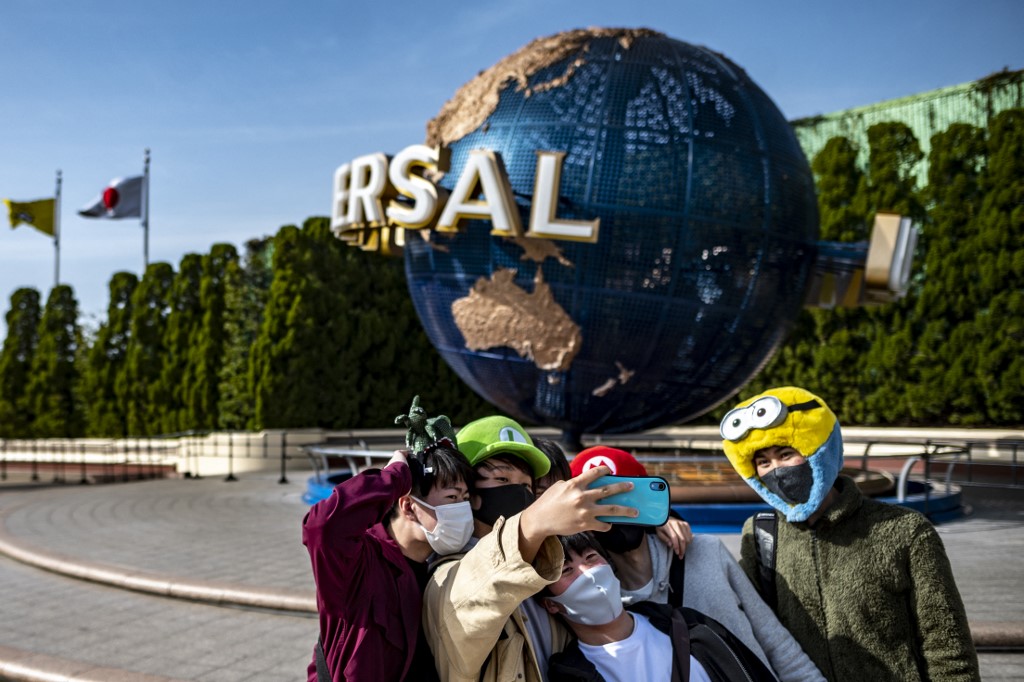 In this picture taken on March 17, 2021, visitors pose for pictures at Universal Studios Japan in Osaka. (Photo: AFP)

TOKYO, March 31 (Xinhua) -- The governor of Japan's Osaka Prefecture on Wednesday asked the central government to apply stronger anti-virus measures to the prefecture based on a revised law as the prefecture battles a surge in COVID-19 cases.

Governor Hirofumi Yoshimura said the prefecture in western Japan is already experiencing a "fourth wave" of infections and requested the anti-virus measures be in place for three weeks beginning April 5 at the latest.

The revised law enables the central government to declare a situation that falls short of a state of emergency in which special measures can be taken to counter the spread of the virus.

The designation can be applied when infections are surging in a situation equivalent to Stage 3, the second-highest on the government's four-tier alert system.

Yoshimura's request, likely to be approved by the central government, comes as the prefecture reported 599 new COVID-19 cases Wednesday, marking the first time in more than two months that its daily tally has surpassed 500.

Tokyo, the epicenter of the pandemic in the country, has consistently reported the highest tally of infections on a daily basis since the outbreak.

The western prefecture's request to the central government likely includes such measures as shortening bars and restaurants opening hours to 8 p.m. from the current 9 p.m., with Yoshimura saying he wants plastic partitions set up in restaurants and customers to wear face masks when they converse.

Shigeru Omi, head of the government's COVID-19 subcommittee and an infectious disease expert, while saying that the recent surge in infections was down to young people partying in the spring holidays, said that Osaka was on the brink of reaching Stage 4 on the alert system.

"Now is the time to consider intensive measures for Osaka," Omi said in a parliament session on Wednesday, adding that the number of people infected with virus variants in Osaka was disproportionately high.