TOKYO, Jan. 12 (Xinhua) -- Japanese Prime Minister Yoshihide Suga is set to expand a state of emergency declared over the COVID-19 pandemic for the Greater Tokyo area to include Osaka, Kyoto and Hyogo prefectures as the virus is also continuing to surge in western Japan, sources close to the matter said Tuesday. 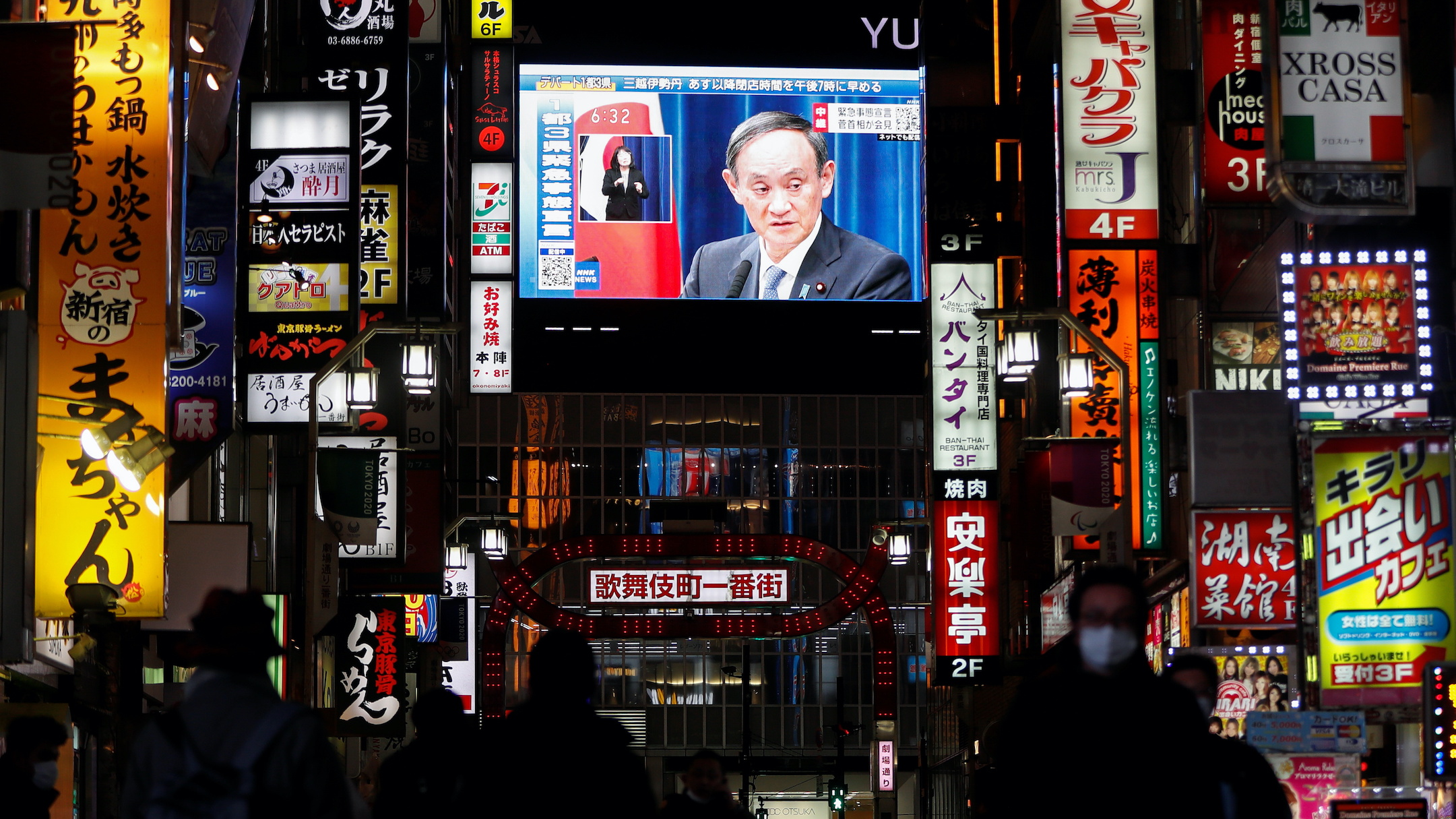 Suga told executives of the ruling Liberal Democratic Party (LDP) that he intends to broaden the initial state of emergency that came into effect on Friday for Tokyo and its three neighboring prefectures of Chiba, Kanagawa and Saitama, to cover the western areas.

"I want to make a swift decision on whether to include the three western prefectures," Suga was quoted as telling the executives of his LDP.

Government sources were later quoted as saying that Aichi and Gifu prefectures will also be added to the expanded state of emergency, following requests from their governors.

The central government is also considering including Tochigi Prefecture, north of Tokyo, and the southwestern Japan prefecture of Fukuoka in the declaration, sources close to the matter have also been quoted as saying.

Ahead of the expected expansion of the state of emergency, Hyogo Prefecture requested restaurants and bars in parts of the prefecture to close by 9:00 p.m.

Osaka and Kyoto prefectures meanwhile, have extended the duration of requests for shortened opening hours of restaurants and bars.

Osaka Prefecture has reported more than 3,800 new COVID-19 cases in the week through Monday, while Kyoto and Hyogo prefectures have also reported record-high daily figures as the virus' resurgence in western regions appears to show no signs of abating.

As for the prefectures that may soon be covered by the expanded state of emergency, Osaka confirmed 374 new cases on Tuesday, while Kyoto saw cases rise by 108. Hyogo Prefecture, for its part, saw its daily tally reach 161, according to the latest figures Tuesday evening.

The Tokyo metropolitan government, meanwhile, reported 970 new daily COVID-19 infections on Tuesday, marking the first time since Jan. 4 the infection rate in the capital of 14 million has dropped below the 1,000-mark.

Tokyo, the hardest hit by the virus among Japan's 47 prefectures, now has a cumulative total of 77,133 infections.

The national death toll from the virus has now reached a total of 4,192 people, according to Tuesday evening's figures.

Under the state of emergency, people in the affected areas will be asked to refrain from making unnecessary trips outdoors, and restaurants and bars requested to shorten their operating hours.

Other establishments like non-essential shops and departments stores may also be asked to shorten their working hours, in a bid to curb the spread of the virus.

The recent surge in cases has underscored fears that the virus is continuing to spread rampantly across the archipelago, particularly in urban areas where medical facilities are becoming increasingly strained, with experts warning they could buckle if the virus' spread continues unabated.

Japan's first state of emergency was declared in April, 2020 in Tokyo and six other prefectures before being expanded nationwide and then lifted incrementally in May.

The legislation giving the government the authority to declare a state of emergency was enacted in March, 2020.

The legislation provides a legal basis for governors to ask residents in their prefectures to stay at home and also enables stronger steps to deal with outbreaks, including the requisition of medical supplies and food, as well as the expropriation of private land for emergency health facilities.

But the legislation does not provide a legal basis for imposing a lockdown with restrictions on the movement of people, or fines for those who leave their homes, as has been seen in numerous countries' lockdowns overseas.

As things stand, there are currently no penalties for people or establishments who fail to comply with the new measures set out, although Suga has said the government will, by proposing a legal revision, try to change this.

Suga has said a legal revision aimed at providing benefits for those who comply with anti-virus measures, such as complying with earlier closing times, and penalties for those who do not conform, will be sought in a parliamentary session.

On Tuesday, proposed revisions to the legislation giving the government the authority to declare a state of emergency were made by the government to allow for tougher, preemptive measures to be enforced.

Such measures could be enforced even before a state of emergency is declared and the revisions include providing local governors with the authority to order businesses to take measures to curb the virus' spread and to fine ones that do not comply, sources familiar with the matter said.

The bill for the amendments will be submitted to a parliamentary session to be convened next Monday, and the government will have them approved as soon as possible, the sources said.