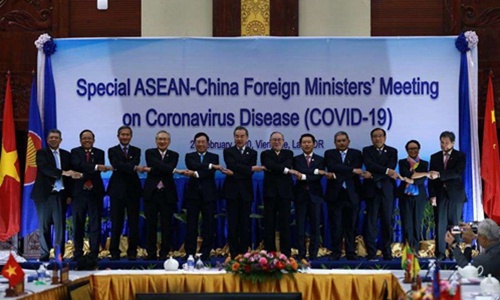 Japanese Prime Minister Suga Yoshihide started his first overseas tour on Sunday since assuming office. During the four-day tour, Suga is scheduled to visit Vietnam and Indonesia, two Southeast Asian countries that both hold significant influence in the region.

Observers generally believe that the new prime minister's destination choice points to Japan's need to boost ties with the Southeast Asian region, whether for reasons of geopolitical strategy or economic recovery.

Some may see the development as an indication that Japan is trying to compete with China for influence among Southeast Asian countries, which may pose a threat to China's economic cooperation with the region - particularly regional projects under the Belt and Road Initiative (BRI). However, from an economic point of view, strengthening ties between Japan and Southeast Asia doesn't necessarily constitute a conflict with China's relationship with the region, as long as all parties can push forward with their cooperation.

Take the BRI projects as an example. If Japan's new government develops infrastructure projects with a handful of Southeast Asian countries, some might interpret the move as competing against the BRI for geopolitical or strategic purposes.

Such a misunderstanding may arise from the fact that the ASEAN has been a priority and focus of BRI development, and infrastructure cooperation between China and ASEAN has been in full swing, with many major projects adopting Chinese technical standards and using Chinese equipment. But in fact, if Japan develops new infrastructure projects in Southeast Asian countries, it will only improve the level of regional economic and social development, which is in line with China's diplomatic priority of boosting the economic development of neighboring countries.

The coronavirus pandemic has reshaped the global industrial chain, and Southeast Asia now stands out as a bright spot in the global value chain. ASEAN countries have successfully brought the epidemic under control and achieved a steady growth in economic and trade cooperation with China. In the first half of this year, Chinese investment in the ASEAN rose 53 percent year-on-year, and the ASEAN has already become China's largest trading partner.

With BRI projects achieving progress in the region, China's Southwestern provinces have also worked closely with neighboring countries on many industrial fronts. This stable economic partnership is resilient enough to withstand any tests it may be subject to.

Under such circumstances, Japan's deepening relationship with Southeast Asian countries is not a bad thing. On the contrary, China and Japan may both promote their cooperation with the region to further strengthen the Asian industrial chain.

From the perspective of Southeast Asia, countries in the region have already made it clear that they won't take sides in the geopolitical game. In this sense, continuous cooperation with both China and Japan is what they need to pursue and is in their fundamental interest.