WORLD Japan sabotages China ties with 'acrimonious' statement with US

Japan sabotages China ties with 'acrimonious' statement with US 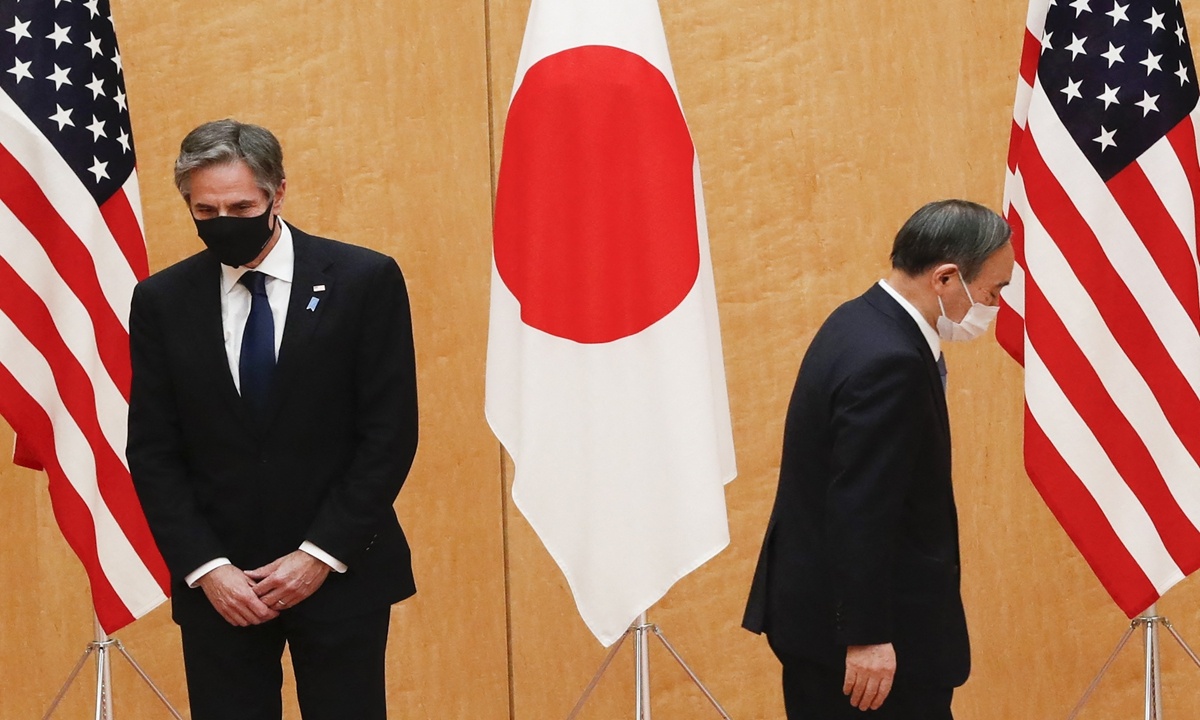 US Secretary of State Antony Blinken (L) meets with Japanese Prime Minister Yoshihide Suga at his office in Tokyo on Tuesday. (Photo: AFP)

After releasing what was deemed as the "most acrimonious" joint statement signed by the US and Japan on Tuesday, the Chinese foreign ministry lashed out at Japan for "downgrading as the US' strategic appendage."

Observers noted Tokyo's move to butter up to Washington will put China-Japan ties, which has been stabile for years, in jeopardy.

"The joint statement between the US and Japan, which disregards historical evidence, facts and truth, serves as strong evidence of the two countries' despicable collusion to interfere in China's domestic affairs and throw mud at China," Zhao Lijian, spokesperson of China's foreign ministry, said at a Wednesday briefing.

The US and Japan stick to the Cold War mentality, trying to form a circle to contain China, which totally goes against the trend, said Zhao, noting that their behavior will only bring chaos, and even conflicts in the region.

The spokesperson especially lashed out at Japan, saying Tokyo's alliance with Washington showed it was "willing to depend on the pleasure of the US for its selfish purposes, and downgraded Japan as the US' strategic appendage."

The joint statement said "The US and Japan acknowledged that China's behavior, where inconsistent with the existing international order, presents political, economic, military and technological challenges."

The statement was signed after US Secretary of State Anthony Blinken and Secretary of Defense Lloyd Austin held talks with Japanese Foreign Minister Toshimitsu Motegi and Defense Minister Nobuo Kishi in Tokyo on Tuesday.

Blinken told a press conference following the meeting that their talks also covered topics ranging from the South China Sea to Taiwan, to the Diaoyu Islands, and even Hong Kong and Xinjiang were included.

Experts said that Japan's signing of the joint statement, which is seen as the "most acrimonious one between the US and Japan against China," goes against the four-point agreement signed by Beijing and Tokyo in 2014 to improve bilateral ties. Bilateral relations have been stable since 2017. But Japan is singlehandedly trying to jeopardize it.

Lü Yaodong, director of the Chinese Academy of Social Sciences' Institute of Japanese Studies, told the Global Times the fact Japan has pointed a finger at China on topics including Hong Kong and Xinjiang, which it never touched previously, shows Japan aims to deliberately stir trouble between the two countries.

The expert pointed out that Japan's plan is to benefit from its alliance with the US, while taking economic advantage of China's vast market. "Japan's move makes it hard for people to believe it sincerely wants to improve relations, and even shows it does not take its relations with China very seriously."