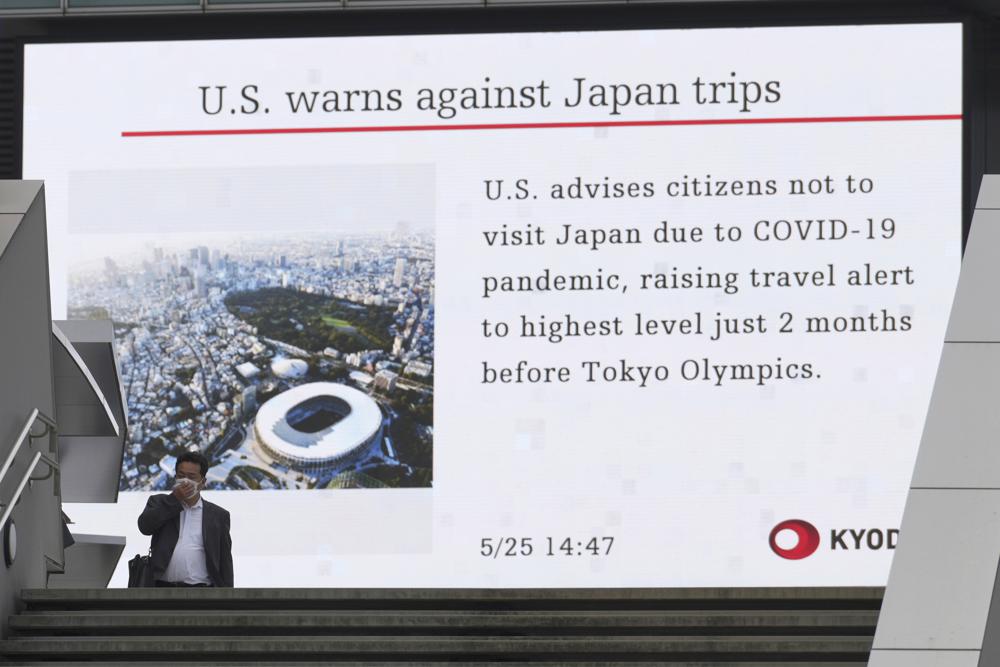 A man wearing a mask to help protect against the spread of the coronavirus walks in front of a screen showing the news on U.S. warning against visits to Japan Tuesday, May 25, 2021, in Tokyo. (Photo: AP)

The Japanese government Tuesday was quick to deny a U.S. warning for Americans to avoid traveling to Japan would have an impact on Olympians wanting to compete in the postponed Tokyo Games.

U.S. officials cited a surge in coronavirus cases in Japan caused by virus variants that may even be risks to vaccinated people. They didn't ban Americans from visiting Japan, but the warnings could affect insurance rates and whether Olympic athletes and other participants decide to join the games that begin July 23.

Most metro areas in Japan are under a state of emergency and expected to remain so through mid-June because of rising serious COVID-19 cases that are putting pressure on the country's medical care systems. That raises concern about how the country could cope with the arrival of tens of thousands of Olympic participants if its hospitals remain stressed and little of its population is vaccinated.

Japan's Chief Cabinet Secretary Katsunobu Kato told a regular news conference Tuesday that the U.S. warning does not prohibit essential travel and Japan believes the U.S. support for Tokyo's effort to hold the Olympics is unchanged.

“We believe there is no change to the U.S. position supporting the Japanese government's determination to achieve the games,” Kato said, adding that Washington has told Tokyo the travel warning is not related to participation of the U.S. Olympic team.

The United States Olympic & Paralympic Committee said it still anticipates American athletes will be able to safely compete at the Tokyo Games.

Fans coming from abroad were banned from the Tokyo Olympics months ago, but athletes, families, sporting officials from around the world and other stakeholders still amount to a mass influx of international travelers. The Japanese public in opinion surveys have expressed opposition to holding the games out of safety concerns while most people will not be vaccinated.

The U.S. warning from the Atlanta-based Centers for Disease Control and Prevention said: “Because of the current situation in Japan even fully vaccinated travelers may be at risk for getting and spreading COVID-19 variants and should avoid all travel to Japan.”

The State Department’s warning was more blunt. “Do not travel to Japan due to COVID-19,” it said.