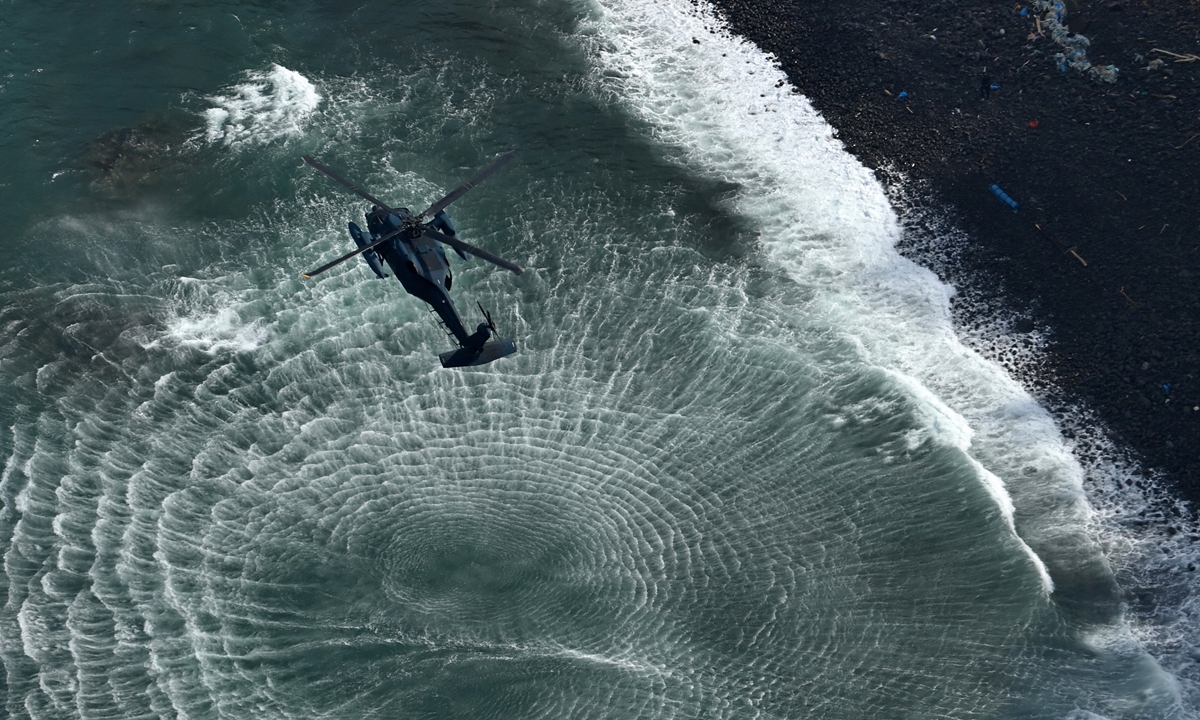 A self-defense force helicopter hovers as search operations continue for the missing sightseeing ship KAZU I, which carried 26 passengers and crew, off the Shiretoko Peninsula in Shari, Hokkaido, Japan on April 24, 2022. Rescuers said they have found nine people, most of them unresponsive, said AFP. Photo: AFP

Inquiries began into what caused the disappearance of a Japanese tour boat off the nation's northern coast as search efforts intensified on Monday to find the boat and its missing passengers, with the confirmed death toll rising to 11.

So far nothing has been found of the ship, the Kazu I, which left harbor on Saturday on one of the sightseeing trips for which the northern Shiretoko peninsula is famous carrying 24 passengers, including two children, and two crew members.

Only a few orange flotation devices bearing its name have been discovered adrift by a rocky area along the rugged coastline.

One child is among the dead.

Searching resumed on Monday using aircraft and patrol boats, with media saying local fishing boats from the port of Utoro had also been mobilized. Searchers also walked steep cliffs along the shoreline.

The Transport Ministry sent officials to the site on Sunday to coordinate operations, and Transport Minister Tetsuo Saito also visited, calling for every possible measure to be taken in determining what went wrong and preventing a recurrence.

"Our duty is to find out exactly what happened," a Transport Ministry investigator told reporters at the site on Monday.

According to media reports, waves were high in the area on Saturday and fishing boats that departed early in the morning returned to port quickly because of the seas conditions.
The Kazu I was the first tour boat to operate in the area this season, Kyodo news agency said.

It added that the same vessel had collided with a floating object in May 2021, injuring three people, and ran aground in shallow water shortly after leaving port in June.

The coast guard said it would be difficult to say what exactly had happened to the ship until more evidence or debris was found, but so far there are no hints of its whereabouts. The boat company could not immediately be reached for comment.

The boat went missing on Saturday several hours after departing for a tour of the Shiretoko Peninsula, famous for its rugged coastal scenery and wildlife. The boat operator had called to report it was taking on water and listing at a 30-degree angle, local media reported, shortly before contact was lost.

Questions have arisen about why it took several hours after the boat's first distress call for rescuers to arrive, but deputy chief cabinet secretary Yoshihiko Isozaki said the nearest military aircraft were based 150 kilometers away and had on patrol at the time.

The sea and weather conditions meant it took longer than normal from coast guard ships to arrive, Isozaki added.

Drift ice can be seen in area waters as late as March, and water temperatures now would be 2 to 3 C, local officials said in a statement.

"Just a few minutes in that sort of water would start clouding your consciousness," a local fisheries official said.