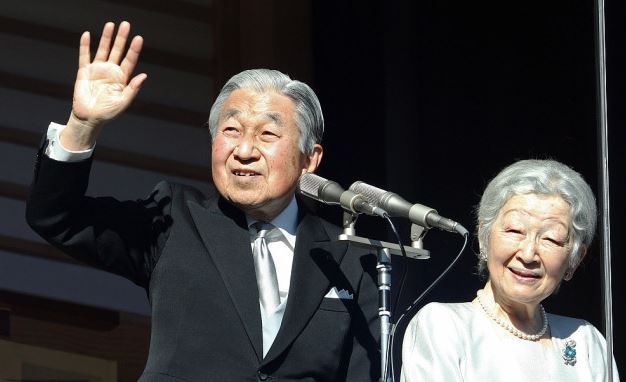 Japanese Emperor Akihito waves at well-wishers on the balcony of the Imperial Palace's Chowaden reception hall as Empress Michiko stands next to him during the customary New Year greeting event, Wednesday morning, Jan. 2, 2019, in central Tokyo, Japan. (Photo: VCG)

Japan will announce its new era name on April 1, one month before the abdication of Emperor Akihito, Japanese Prime Minister Shinzo Abe said in New Year's press conference in Ise on Friday.

The new "genko," which means "era name," will be signed off at a Cabinet meeting on April 1 before the emperor abdicates on April 30 and Crown Prince Naruhito ascends the imperial throne on May 1, Abe said.

He said in the press conference that the government plans to reveal the new name in advance this time in order to reduce the influence of the change on people's lives.

"The government will make all-out efforts to prepare for the historic imperial succession so that people can celebrate altogether," Abe said.

Emperor Akihito, 85, in a rare nationally-televised address in August 2016, expressed his desire to relinquish his duties as emperor owing to concerns about his age, health and ability to carry out his formal duties.

No living emperor in Japan has abdicated the throne in around 200 years.

While modern Japan tends to use the Gregorian calendar, a new era name is important for Japanese people as it will hold a particular meaning. The new era name will also be used on official documents.