WORLD Japan to buy $146 million island for US military drills

Japan to buy $146 million island for US military drills

Japan said Monday it had agreed to buy an uninhabited island off its southwest coast for 146 million US dollars, eyeing it for the US military drills. 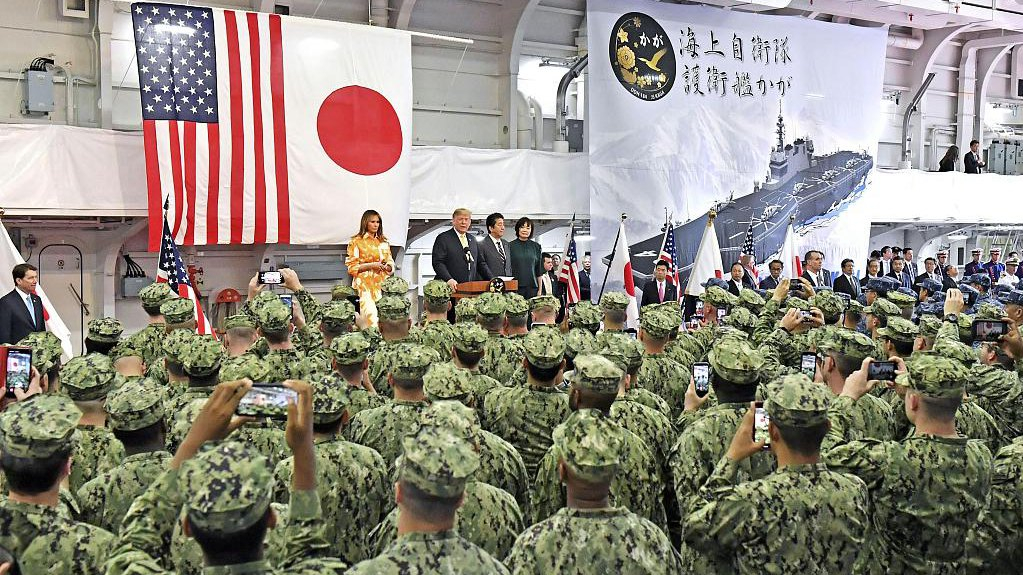 Japan's Prime Minister Shinzo Abe delivers a speech to Japanese and US troops with the US President Donald Trump at JMSDF Yokosuka base, Kanagawa, Japan on May 28, 2019. (File photo: CGTN)

Tokyo and Washington agreed in 2011 to relocate a training site for US fighter jets to Mageshima island, around 30 kilometers off the southwestern Japanese coast.

Japan's Chief Cabinet Secretary Yoshihide Suga said an agreement to purchase Mageshima was reached on Friday "after discussions between the defense ministry and the developer who owns the majority of the island."

Atsugi, a city near Tokyo, used to host American flight training operations back in the 1990s. However, due to noise complaints by residents, the drill site was transferred to another military base in Iwo Jima, some 1,200 kilometers (750 miles) south of Tokyo.

Last year, American fighters moved from Atsugi to Iwakuni base in Western Japan, even further away from Iwo Jima, where they practice the drills.

Washington had since requested a move, saying Iwo Jima, a key World War II battlefield, was too far away from the Iwakuni base.

Suga said a facility would be built on the island for landing practice "at an early date," adding that he could not reveal further details as the acquisition was not complete.

Japan's military has long been restricted to self-defense and the country relies heavily on the US under a bilateral security alliance.

President Donald Trump has repeatedly insisted that Japan and other US allies should contribute more to the costs of their own defense.

Some residents who live on islands close to the new site have said they are concerned about the noise of a potential flight training base.