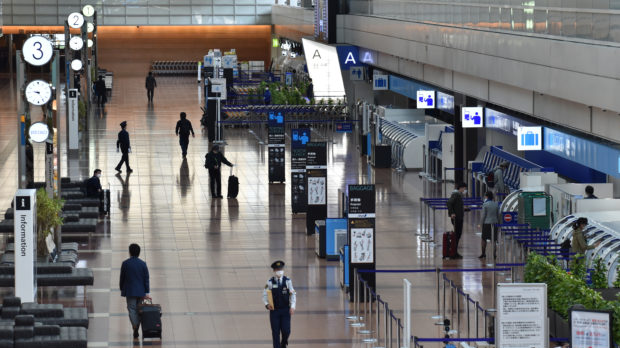 Japan has imposed an entry ban on visitors from more than 140 countries and regions, but the government has said it will ease them gradually. (Photo: AFP)

Japan's foreign ministry announced on late Wednesday it will lift a ban on the re-entry of some foreign residents from August 5. Up to 90,000 foreign nationals with residence permits, including students, business people and trainees, can re-enter from more than 140 countries and regions.

Those eligible will have to obtain a "re-entry confirmation letter" from the nearest Japanese diplomatic mission and submit evidence of a negative virus test conducted within 72 hours of their flight.

From September 1, those conditions will also apply to foreign nationals in other categories, including permanent or long-term residents and spouses and children of Japanese nationals or permanent residents.

Japanese citizens are able to re-enter the country from places on the ban list, and foreign residents in Japan can apply for humanitarian exemptions to visit countries on the list and be allowed to return.

Japan is bracing for a surge in the number of coronavirus infections. The country reported 1,264 new cases on Wednesday, according to national broadcaster NHK, surpassing the previous record of 981, with infections spreading rapidly not only in Tokyo, but also in other regions, including remote islands.

Northern Japan's Iwate prefecture, which had been the last-remaining prefecture free from coronavirus infection, had its first cases on Wednesday, while the southern island of Okinawa had 44 infections, hitting a record for the third day in a row.

Prime Minister Shinzo Abe's government launched a national travel campaign, dubbed "Go To Travel", on July 22 that aims to revive a battered tourism industry despite a resurgence in coronavirus infection.

Norio Sugaya, a member of the World Health Organization's influenza panel, said the campaign is ill-timed.

"I'm all for supporting the tourism industry ... But we should not do that when infection is resurgent. The virus spreads as people move. This is clearly a mistake," Sugaya said. "Doctors will soon be signaling the red light. Hospitals will soon be filled, so will ICUs (intensive care units)."