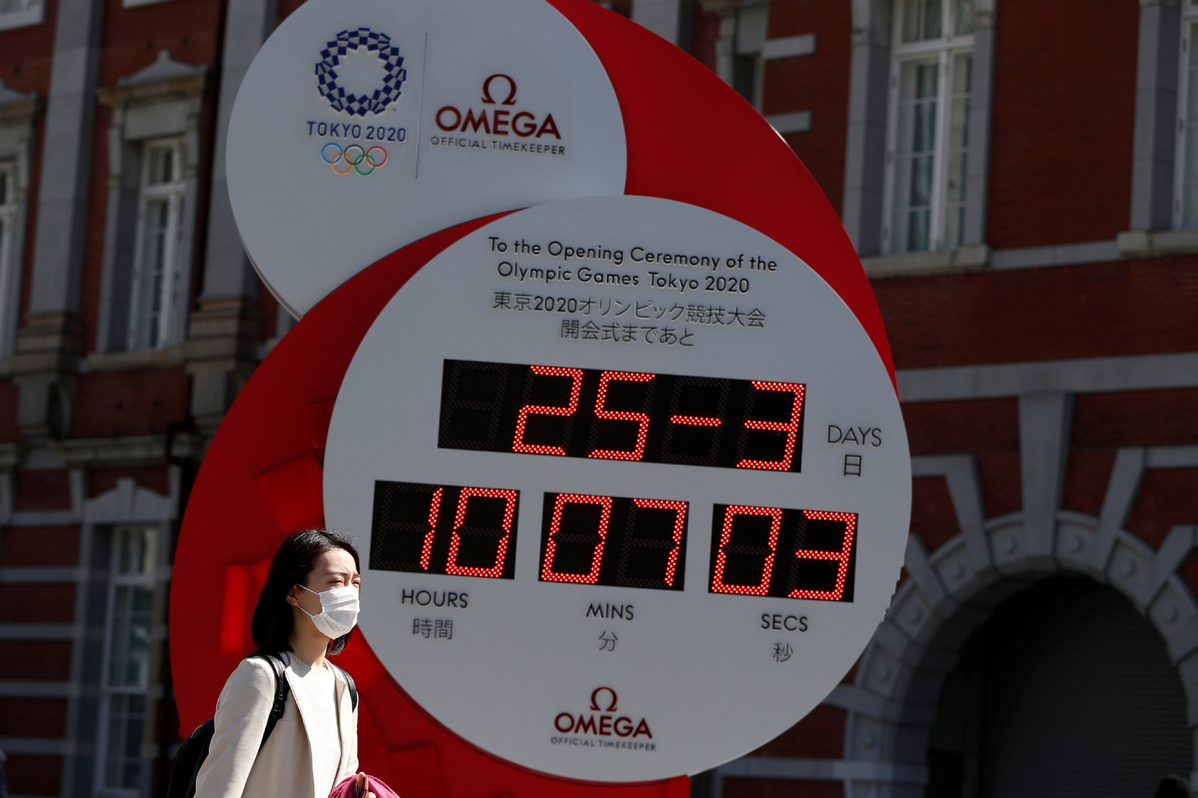 A woman wearing a protective face mask due to the outbreak of coronavirus disease (COVID 19) walks next to Omega clock, which was previously used as a countdown clock for the Tokyo 2020 Olympic Games and currently displaying current time and date, after the announcement of the games 'postponement to the summer of 2021, in Tokyo, Japan, March 25, 2020. [Photo/Agencies]

TOKYO - Japan was preparing a special coronavirus headquarters on Thursday, which could set the stage for a state of emergency over the outbreak, Kyodo news agency reported, after the capital of Tokyo saw a sharp rise in cases this week.

Chief Cabinet Secretary Yoshihide Suga told a news conference it was a "very critical time" for Japan to prevent a surge in the spread of the virus.

Under a law revised this month to cover the coronavirus, the prime minister can declare a state of emergency if the disease poses a "grave danger" to lives and if its rapid spread threatens serious economic damage. The virus has increased Japan's recession risk.

Japan has had 1,313 domestic cases of coronavirus as of Thursday morning, separate from 712 from a cruise ship that was moored near Tokyo last month, broadcaster NHK reported. There have been 45 domestic deaths and 10 from the cruise ship, it said.

If a state of emergency is declared, governors in hard-hit regions would be able to take steps such as asking people to stay home, closing schools and other public facilities and cancelling large events.

The International Olympic Committee and the government on Tuesday agreed to put back the Tokyo 2020 Olympics to 2021 over the outbreak.

On Wednesday, the governor of Tokyo warned of the risk of an explosive rise in coronavirus infections in the capital and asked residents to avoid non-essential outings through April 12, especially over the weekend.

The city has become the centre of Japan's coronavirus epidemic, with 212 cases as of Wednesday, more than any other region after increases this week.

"The government and local authorities will cooperate based on the awareness that this is a very critical time to prevent the spread of the virus," Suga told a news conference.

Tokyo's neighbouring prefectures of Saitama and Chiba were considering asking their residents to refrain from travel to Tokyo over the weekend, media reported. A Saitama official said a decision would be made depending on the situation.

Prime Minister Shinzo Abe has already told schools to close - although many are now preparing to reopen - and asked organisers to refrain from large-scale events, but his instructions had no formal legal basis.

Even if a state of emergency is declared, legal experts have noted there are no penalties for ignoring most of the local authorities' instructions. But the declaration would put added pressure on people and businesses to obey.