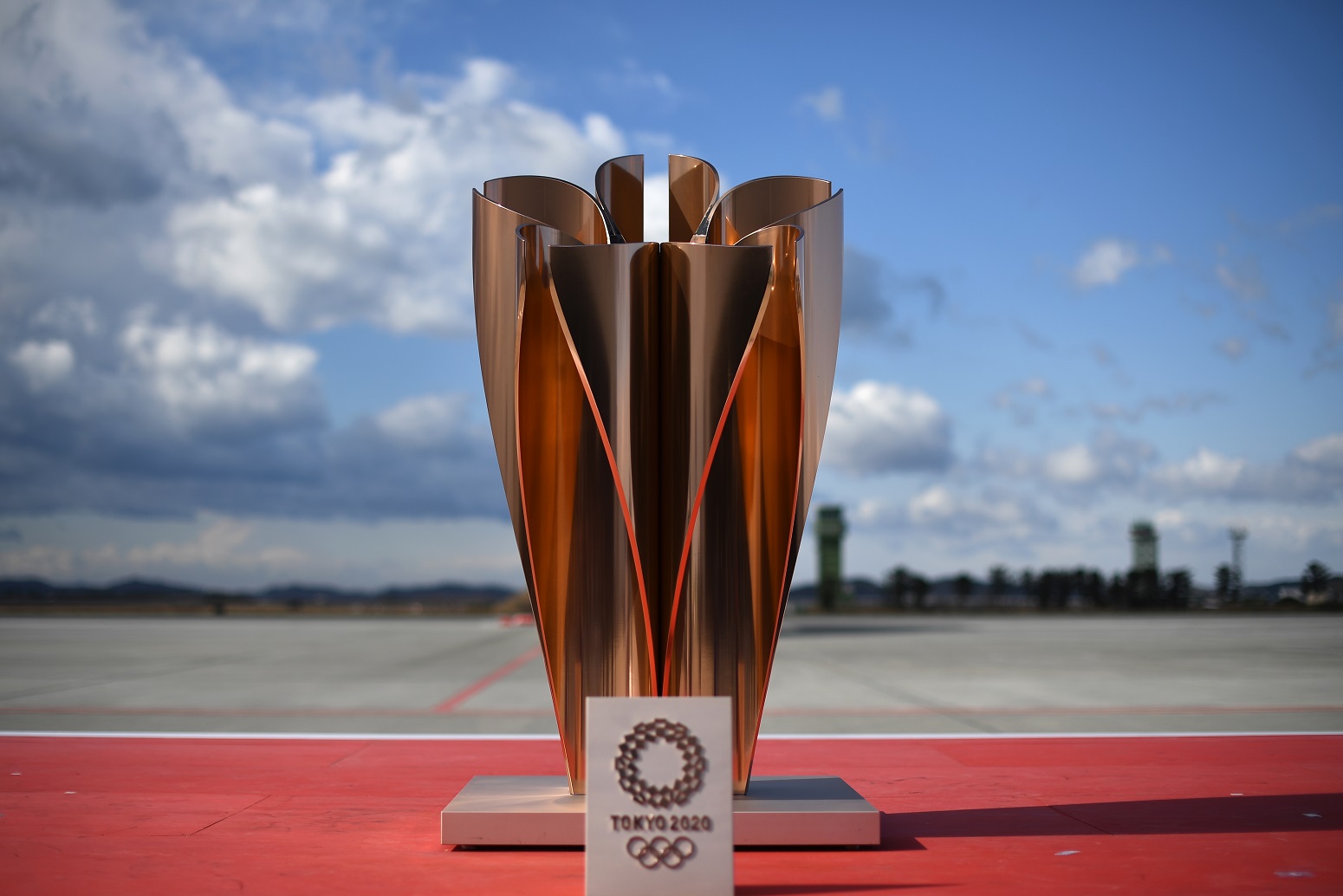 Photo: A Tokyo 2020 cauldron is seen on the stage for the arrival ceremony of the Olympic flame from Greece at Japan Air Self-Defense Force Matsushima Base in Higashimatsushima, Miyagi prefecture on March 20, 2020. /AFP

The Olympic flame arrives in Japan on Friday, with what should have been a joyous celebration dramatically downscaled as doubts grow over whether the Tokyo Games can go ahead during the coronavirus pandemic.

Organisers have already taken the "heartbreaking" decision to pare back events surrounding the torch relay, as the world battles the virus that has killed more than 9,000 people and threatens to spark a global recession.

The flame arrives on a special charter flight into Matsushima Air Base in the Japanese province of Miyagi, deliberately chosen as part of the "Recovery Olympics" to showcase the region's revival after the 2011 earthquake, tsunami and nuclear meltdown.

But some 200 local children that were due to welcome the flame will be kept away as part of measures designed to halt the spread of the virus, which has infected 900 people in Japan.

The relay begins on March 26, starting from the J-Village sports complex in Fukushima that was commandeered as a base by workers scrambling to contain the fall-out from the nuclear meltdown.

"The Olympic flame relay is the biggest event ahead of the Olympics. It is very important for us to carry it out at any cost. It is an opportunity for people outside Tokyo to feel a sense of affinity for the Olympics," said Tokyo 2020 CEO Toshiro Muto.

The coronavirus has already affected the relay. In what Muto described as a "heartbreaking" decision, organisers have been forced to scale back what should have been a key event to raise awareness and excitement ahead of the July 24 opening ceremony.

While spectators are allowed to watch from the roadside, fans have been urged to "avoid forming crowds", with organisers warning there could be a change of programme in the event of "excessive congestion".

Daily arrival and departure ceremonies are closed to the public and all torch-bearers will have their temperatures taken before participating in the relay, which is scheduled to visit every part of Japan before entering Tokyo in mid-July.

- 'Bigger than the Olympics' -

The virus has already played havoc with the traditional early stages of the torch relay in Greece -- the lighting ceremony in ancient Olympia took place without spectators and was watched by a severely reduced delegation from Tokyo.

Organisers were then forced to scrap the Greek leg of the relay after large crowds mobbed Hollywood actor Gerard Butler as he lit a cauldron in the city of Sparta.

With borders shut in Europe -- which has become the epicentre of the crisis -- Tokyo officials will not be travelling to collect the torch, with former Olympic swimmer Naoko Imoto representing Japan at the official handover.

As the flame arrives, there are increasing clouds over the Games, with some athletes past and present attacking the International Olympic Committee for insisting there is no need for "drastic" action such as postponement or cancellation.

"This crisis is bigger than even the Olympics," fumed Hayley Wickenheiser, a Canadian IOC member with four ice hockey golds.

As well as wiping out the global sporting calendar, the coronavirus has also put paid to many athletes' training schedules, leading some to propose a postponement.

The IOC, which will take any decision over the fate of the Games, has encouraged all athletes to train for the Games "as best they can", stressing it is "fully committed" to holding the event as planned.

Nevertheless, IOC president Thomas Bach has admitted that qualifying is becoming a problem as competitions are scrapped.

"No solution will be ideal in this situation," an IOC spokesman acknowledged in comments to AFP on Wednesday.