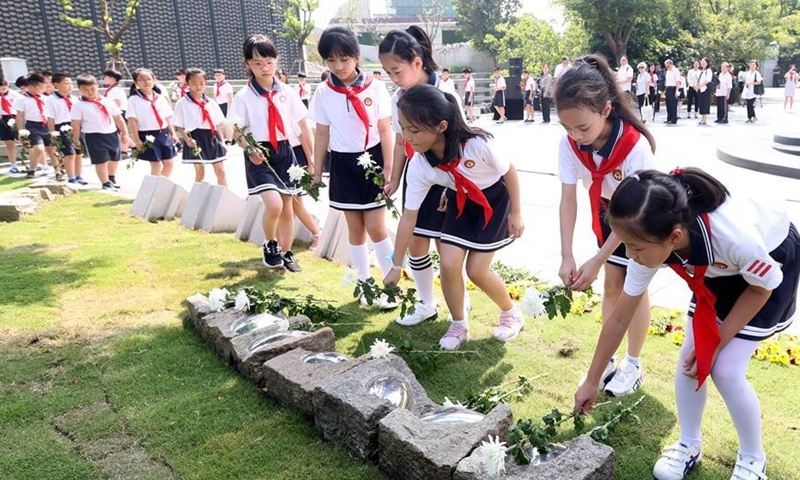 Students lay flowers for unknown martyrs during a memorial activity at the Victory Square of Shanghai Songhu Memorial Hall of the War of Resistance Against Japanese Aggression in Shanghai, east China, Sept. 3, 2020. (Photo: Xinhua)

Japanese residents and media outlets paid close attention to China's commemoration on Thursday of the 75th anniversary of the victory of the Chinese People's War of Resistance Against Japanese Aggression, with Chinese analysts saying Japanese society has shown greater interest in China and where China-Japan relations are headed before Japan elects a new prime minister.

Their interest reflects the expectations for stable China-Japan relations, and concern on whether differences between the two countries would affect further ties.

Chinese leaders led by President Xi Jinping on Thursday attended a commemoration in Beijing of the 75th anniversary of the victory of the Chinese People's War of Resistance Against Japanese Aggression, and the World Anti-Fascist War.

All participants sang the national anthem and then paid a silent tribute to those who sacrificed their lives in the war.

Several major Japanese media, including NHK, the Asahi Shimbun and the Yomiuri Shimbun covered the event. The NHK report said Xi did not deliver a speech during the commemoration, and China's TV programs did not criticize Japan.

Some Japanese interviewed by the Global Times said this year's commemoration by China was "low-key," and they believe that it was due to improving China-Japan relations.

At Thursday's media briefing, a Japanese reporter asked a Chinese Foreign Ministry spokesperson whether Xi did not deliver a speech because of expectations of improved China-Japan ties. Spokesperson Hua Chunying said Chinese leaders do not make speeches every year, but commemorate this important moment in different ways. As for improving bilateral ties, it is the wish of the people of the two countries, which should not be evaluated based on a speech, Hua said.

Yoshikazu Kato, a Japanese adjunct associate professor from the Asia Global Institute at the University of Hong Kong, told the Global Times that when there was a grand commemoration, the Japanese society tended to interpret it as "China's provocation of China-Japan relations" and a political ceremony to pressure Japan.

But with bilateral ties gradually improving, and more mutual understanding is achieved through increased official and unofficial exchanges in the past years, Japanese people have been showing more sincerity in learning about the war, Kato said.

Kato's views were echoed by some Japanese residents.

Kokubo, a Japanese working in Shenzhen, South China's Guangdong Province, told the Global Times on Thursday that September 3 was an opportunity for Japanese society to think about relations with China, and he hopes that more Japanese could get interested in China and deepen their understanding about China.

He said Japan and China have inseparable relations, as many Japanese study and live in China, and the two countries will continue to deepen their ties.

Although Japan will soon have a new prime minister after its longest-serving Prime Minister Shinzo Abe announced his resignation, many Japanese, including Kokubo, believe that the government will not change its policy toward China, and that the two countries may further improve ties.

A Japanese man who has worked in Beijing for years told the Global Times on condition of anonymity that the top three candidates - former foreign minister Fumio Kishida, Chief Cabinet Secretary Suga Yoshihide and former Japanese defense minister Shigeru Ishiba - had no differences with Abe on China policies.

He said that China and Japan could further improve ties in the next two years with the Tokyo Olympic Games in 2021 and Beijing 2022 Winter Olympics, and 2022 also marks the 50th anniversary of the normalization of relations between China and Japan.

Da Zhigang, director and a research fellow at the Institute of Northeast Asian Studies of the Heilongjiang Provincial Academy of Social Sciences, told the Global Times that the Japanese media and society's growing attention to China-Japan relations before its new prime minister is elected reflects their expectations for stable ties and their uncertainty of how much space there is to resolve differences and how they would affect future ties.

Amid US unilateralism, and provocation to regional peace and stability, there is a growing need for China and Japan to strengthen cooperation to maintain the region's stability and prosperity, analysts said.