A Japanese billionaire and online fashion tycoon, Yusaku Maezawa, will be the first man to fly on a monster SpaceX rocket around the Moon as early as 2023, and he plans to bring six to eight artists along.

Maezawa, 42, will be the first lunar traveler since the last US Apollo mission in 1972. He paid an unspecified amount of money for the privilege. 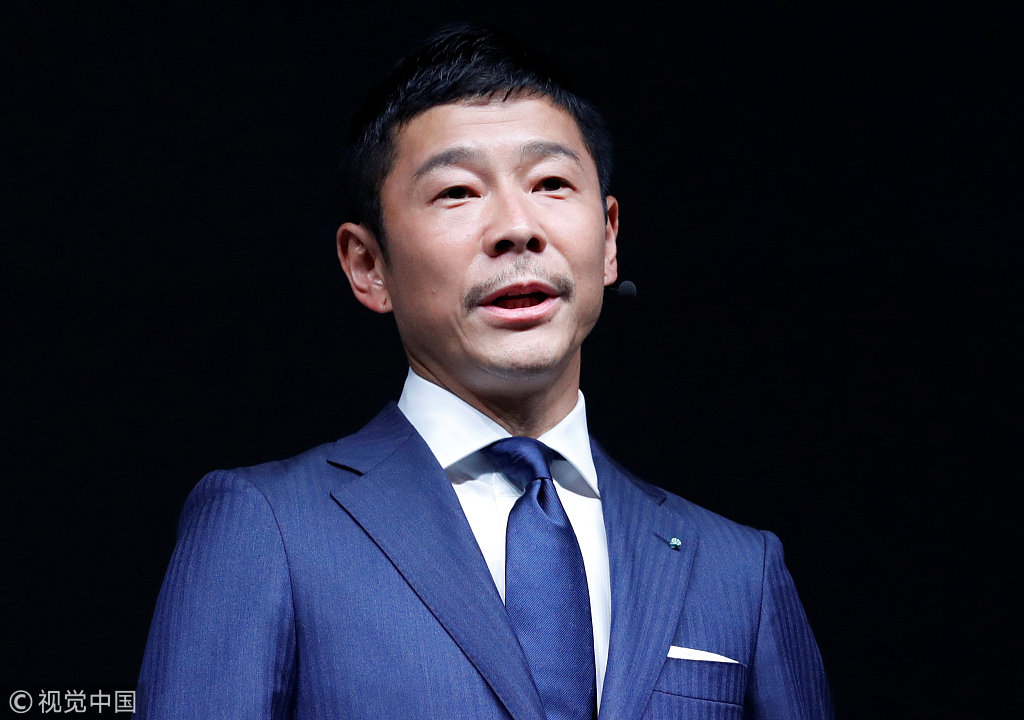 "Ever since I was a kid, I have loved the Moon," Maezawa said at SpaceX headquarters and rocket factory in Hawthorne, California, in the middle of metropolitan Los Angeles, late Monday.

"This is my lifelong dream."

Maezawa is chief executive of Japan's largest online fashion mall, and is the 18th richest person in Japan with a fortune of $3 billion, according to the business magazine Forbes.

Maezawa's other hobby is amassing valuable works of modern art and last year, he announced the acquisition of a Jean-Michel Basquiat masterpiece worth $110.5 million.

His love of art led him to decide to invite artists to come along for the trip, he said.

"I would like to invite six to eight artists from around the world to join me on this mission to the Moon," Maezawa said.

"They will be asked to create something after they return to Earth. These masterpieces will inspire the dreamer within all of us."

Until now, Americans are the only ones who have left Earth's orbit. A total of 24 NASA astronauts -- all white men -- voyaged to the Moon during the Apollo era of the 1960s and '70s. Twelve walked on the lunar surface.

The first space tourist was Dennis Tito, an American businessman who in 2001 paid some $20 million to fly on a Russian spaceship to the International Space Station.

"He stepped forward," Musk added. "We are honored that he chose us."

Musk said he would not reveal the price Maezawa paid for the Moon trip, but said it would be "free for the artists."

"This is dangerous, to be clear. This is no walk in the park," Musk cautioned.

"When you are pushing the frontier, it is not a sure thing. There is a chance something could go wrong."

The ride will take place aboard a Big Falcon Rocket (BFR), which may not be ready for human flight for five years at least, Musk said.

The BFR was first announced in 2016, and was touted as the most powerful rocket in history, even more potent than the Saturn V Moon rocket that launched the Apollo missions five decades ago.

Last year, Musk said the BFR's admittedly "ambitious" goal was to make a test flight to Mars in 2022, followed by a crewed flight to the Red Planet in 2024.

This isn't the first time Musk has vowed to send tourists around the Moon. Last year, he said two paying tourists would circle the Moon in 2018, but those plans that did not materialize.

Musk showed off designs of the 118-meter (129 yards) long BFR, which will consist of a first stage with engines and fuel systems, and a second stage with the spacecraft where the passengers will ride.

Like SpaceX's existing rockets, the Falcon 9 and Falcon Heavy, the first stage can detach from the rest of the rocket and return to Earth for an upright landing.

The spacecraft will continue on toward the Moon, powered by its own engines.

The BFR spacecraft's shape is reminiscent of the space shuttle, the bus-like US spaceships that carried astronauts to space 135 times from 1981 to 2011.

Musk has said he wants the BFR's vessel to be able to hold around 100 people, and that the launch system could one day be used to colonize the Moon and Mars in order to make humans a "multi-planetary" species.

Whatever the details, SpaceX is touting an experience considerably more ambitious than space tourism plans under development by other private companies.

Virgin Galactic, founded by British tycoon Richard Branson, and billionaire Amazon founder Jeff Bezos's rocket company Blue Origin, are working on trips to the edge of space that could offer tourists a chance at weightlessness for 10 minutes or so.

Virgin's trip will cost about $250,000. Blue Origin's price has not been revealed.

Musk, who is also the CEO of Tesla Motors, has drawn attention in recent months over his erratic behavior.

He has alleged that a cave diver in Thailand who helped rescue stranded boys was a "pedo," smoked what appeared to be marijuana on a comedian's podcast, spooked Tesla investors with comments about the future of the electric car maker, and admitted to exhaustion and use of the sleeping pill Ambien.

But so far this year, his space firm has also kept up a schedule outpaced only by the Chinese government, making 15 launches with its Falcon 9 rocket.

Next year, SpaceX -- which has received billions in NASA funding to ferry supplies to the ISS and build a crew vehicle -- hopes to become the first private company to send astronauts to the space station.