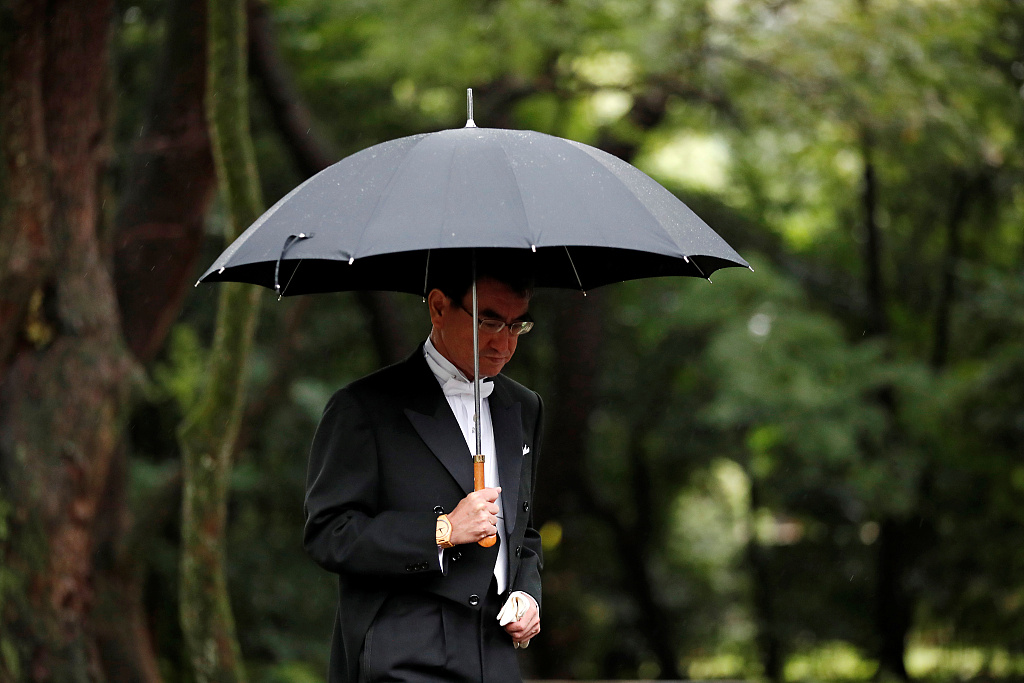 TOKYO, Oct. 29 (Xinhua) -- Japanese Defense Minister Taro Kono on Tuesday apologized after coming under fire for making an insensitive joke about him being nicknamed "rain man" at a time when many parts of the nation are still struggling with recovery efforts in the wake of powerful typhoons.

"I would like to apologize to all those to whom I caused offense," Kono told an upper house committee Tuesday, with reference to the joke-tuned-gaffe he made a day earlier at a fund raising event.

"I was often called 'ame-otoko' by local residents. Since I became defense minister, there have already been three typhoons," Kono said in an apparent attempt at humor.

"Ame-otoko" translates in English to mean a man who always attracts rain wherever he goes, with his gaffe made at a time when he was supposed to be showing his thanks to members of Japan's Self-Defense Forces (SDF) who have been working tirelessly over recent months on typhoon-related rescue, recovery, relief and restoration efforts.

Kono apologized to Japanese Prime Minister Shinzo Abe for the insensitive joke and Abe in turn passed on his apologies for his minister's remarks during a meeting on Tuesday with Natsuo Yamaguchi, who leads Komeito, the junior coalition partner of the ruling Liberal Democratic Party (LDP).

Yamaguchi told reporters after the meeting that Abe had said that he would "ensure discipline among ministers going forward."

Kono, however, drew flak from across party lines for his inconsiderate remarks, with Chief Cabinet Secretary Yoshihide Suga, Japan's top government spokesperson, telling a press briefing, "each cabinet member must be self-aware and make an effort to secure people's trust."

"A politician must refrain from doing things that cause pain to victims in disaster-hit areas," Environment Minister Shinjiro Koizumi told reporters in response to Kono's ill-conceived joke, while Toshihiro Nikai, the LDP's secretary general, said politicians must avoid saying and doing things that invite criticism.

Yuichiro Tamaki, who heads the opposition Democratic Party for the People, slammed Kono referring to his remarks as being "thoughtless."

Hagibis, the latest in a string of typhoons to batter Japan, tore through wide swathes of the country earlier this month, causing extensive damage and claiming the lives of nearly 90 people.

It is the most powerful typhoon to hit Japan in decades and has been designated both a "severe" and an "extraordinary" disaster, so the government can allocate more funds to municipalities in the hardest-hit areas, like the already disaster-hit Fukushima Prefecture, the region in which Hagibis claimed the most lives.