"Coronavirus: From 93 infected to 0, what did this Chinese City do to contain the virus?" This short documentary directed by Japanese director Takeuchi Ryo, chronicling epidemic prevention methods adopted by Nanjing, East China's Jiangsu Province, has stirred exhilarating response overseas. 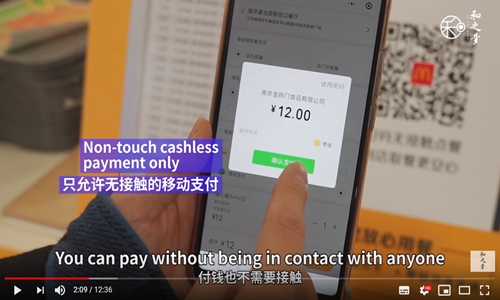 (Photo: A screenshot of the video)

As of press time, the short documentary garnered 1,143,500 views YouTube with over 5,600 comments and counting.
Speaking exclusively to the Global Times on Saturday, Takeuchi said through his film he doesn't intend to appeal to foreign countries to emulate China blindly but expects other countries to be "inspired" by China's experience and work out their own epidemic prevention measures, taking cues from China's experience, in line with their specific conditions.
Previously, Takeuchi has released the documentary in Japanese in a bid to share China's pandemic control measures with the Japanese audience. After the pandemic raged through Europe and the US, it prompted him to release an English version of his documentary.
Many overseas Chinese, Takeuchi said, have approached him through Chinese social media Weibo, asking for the documentary to be released in German, Spanish, and Korean versions, as they are eager to let the locals know about China's epidemic prevention, fearing that the measures adopted by the respective countries might not be up to the mark.
In the English version, Takeuchi documented the precautionary measures adopted by Nanjing such as using drones to disseminate the message of epidemic prevention, two-week quarantine at designated hotels for international arrivals to the city, regulation of visitor's flow in Nanjing's famous sightseeing spot, Confucius Temple, temperature screening in metros, and online teaching mode.
To address the issue of hate-crimes and xenophobic attacks against overseas Chinese in Europe and the US, particularly for wearing face masks, Takeuchi emphasized the importance of wearing masks in his documentary. "Friends in Europe, please don't discriminate against the Asians. I really think masks are helpful in preventing the virus. It's not gonna guard you against all viruses but it's definitely better than wearing nothing," says the narration.
After the English version was released, overseas netizens were amazed by China's epidemic prevention measures.
"This video objectively shows the world how China controls the epidemic," commented one viewer.
"I watched the video in Munich, Germany. I learned a lot from it," said another viewer.
"The United States will never be able to control the virus so professionally, and it lacks the level of regulation, technology, and governance to achieve this level," commented another YouTube user.
To share China's anti-pandemic efforts with other countries around the world, Takeuchi made the documentary available free of cost, so the audience can share the video. Besides, he also  appealed to more people to translate it into other languages.
"Fighting against the novel coronavirus pneumonia epidemic should be a public welfare activity and I don't want to make money from this global health crisis," Takeuchi said.
With the help from global Internet users, the short documentary has been dubbed with subtitles in 11 languages, including Korean, Spanish, Italian, Indonesian, and Vietnamese, and has been shared by media in France, Russia, and the UK.
At present Takeuchi and his team are working on another coronavirus-themed short film on how ordinary people are fighting against coronavirus. They are crowd-sourcing video clips from Internet users across the country, and it's scheduled for release in March 27 in English and Japanese.
He hopes to use this opportunity to convey a message to the international community: The successful containment of the virus in China is the result of the efforts of the entire Chinese people.