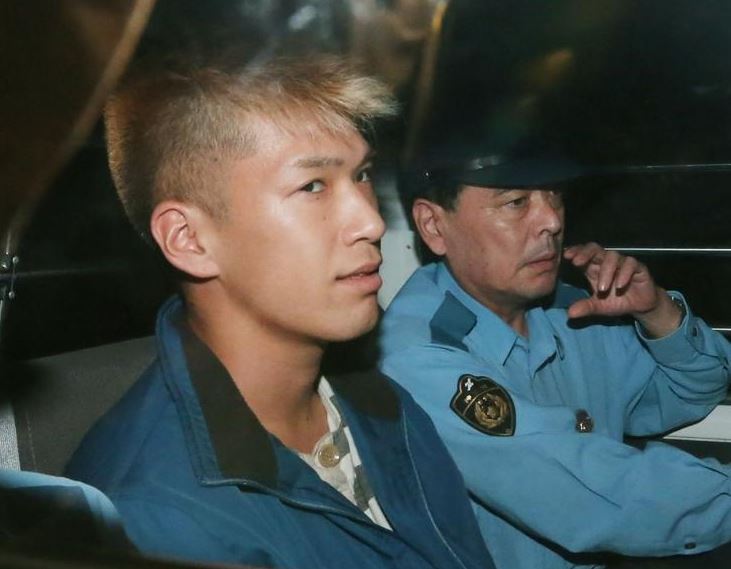 Satoshi Uematsu, charged with murdering 19 disabled people at a care home he used to work at, being moved by police shortly after his arrest in 2016. (File photo: AFP)

TOKYO, Jan. 8 (Xinhua) -- A Japanese man accused of killing 19 people with intellectual disabilities at a care facility near Tokyo admitted to the attack but pleaded not guilty at a hearing at the Yokohama District Court on Wednesday, claiming mental incompetence.

Satoshi Uematsu, 29, a former employee of the Tsukui Yamayuri En care home in Sagamihara, Kanagawa Prefecture, is accused of stabbing 19 residents to death and injuring more than 20 others in a frenzied knife rampage which took place on July 26, 2016.

Uematsu, 29, admitted to the attack at the court hearing and offered an apology.

After voicing his "deep apologies to everyone," Uematsu suddenly turned violent and had to be restrained. The hearing was temporarily adjourned by the presiding judge.

Uematsu's savage attack at the care facility targeted those with intellectual disabilities, with the accused telling local media that he continues to believe that "those who have disabilities, severe enough as to prevent communication, are not people," adding that they bring "misfortune" and are "harmful," according to Kyodo News.

A ruling is expected to be handed down on March 16 and Uematsu's mental state will be a particular focal point prior to the ruling.

He has formerly been diagnosed with a narcissistic personality disorder and was known to use drugs.

Prosecutors said Wednesday that Uematsu can be held criminally responsible although he suffered from a mental disorder due to his drug use, specifically marijuana, according to Japan's public broadcaster NHK.

Uematsu's defense lawyer admitted to all the facts against his client, saying the incident was painful.

He said, however, the defendant committed the crime after becoming mentally disturbed and a "different person" due to his drug use.