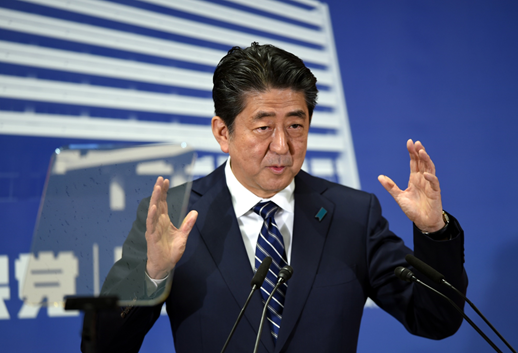 Japanese Prime Minister Shinzo Abe on Monday canceled his trip to Europe and the Middle East to attend to the search and rescue operations underway in regions in western Japan pummeled by torrential rain. According to Toshihiro Nikai, secretary general of Abe's ruling Liberal Democratic Party (LDP), the prime minister was quoted as saying he had "no choice but to cancel" his planned trip overseas as the government steps up its response to the disaster. Abe is now said to be arranging visits to the regions in western Japan hardest hit by landslides and floods, such as Hiroshima Prefecture, where 44 people out of a confirmed 112 nationwide thus far, have been confirmed dead, sources close to the prime minister said. Earlier, Abe had told a meeting of a disaster response unit set up to deal with the flooding that the number of rescue personnel, including Self-Defense Force (SDF) members, sent to the scene had increased to 73,000, as the government steps up the nation's rescue operations. Along with the death toll rising to 112 following widespread torrential rain across western Japan causing lethal landslides and floods, public broadcaster NHK also reported that three others remain in a critical condition and 79 unaccounted for. According to the Fire and Disaster Management Agency, evacuation orders or advisories had been issues to nearly 6 million people spanning 19 prefectures. As of Monday morning, they said that 23,000 people were still staying at emergency evacuation shelters, with blazing heat now compounding the problem. Temperature of up to 35.9 degrees Celsius was recorded in one city in Oita Prefecture, and Japan's Meteorological Agency (JMA) has warned those staying in or providing emergency relief in evacuation shelters to be wary of heatstroke. Along with Hiroshima, other hard-hit regions where fatalities have been reported include Okayama, Ehime, Kyoto, Yamaguchi, Fukuoka, Kagoshima, Hyogo, Shiga, Gifu, Kochi and Saga prefectures. The rescue operations have seen local municipalities enlist the help of the SDF as the ferocity of the storm and the torrential rain have caused the most amount of deaths seen here from such weather in recent decades. Abe had planned to visit Belgium, France, Saudi Arabia and Egypt from Wednesday.