Japanese politicians' worship of the controversial Yasukuni Shrine on the 77th anniversary of Japan's unconditional surrender in World War II has sent waves of anger across neighboring countries, which lodged stern representations and called on Tokyo to squarely face history. As it was the first anniversary marked by the new Japanese prime minister, it was closely watched by Asian countries, said experts. However, to their dismay, they only saw a militaristic Japan careening more to the right and with more twisted historical views.

On the eve of the 77th anniversary of Japan's announcement of its unconditional surrender in World War II, a large number of citizens and tourists braved the high temperatures on August 14, 2022 in Nanjing, East China's Jiangsu Province, to come to the Memorial Hall of the Victims of the Nanjing Massacre by the Japanese Invaders to pay their respects and mourn the 300,000 victims that were killed in the massacre. Photo: IC

Experts noted that a Japan that sticks to historical revisionism will continue to be viewed as "non grata" by its neighboring countries, and its ties with those countries are unlikely to be mended. Instead of reflecting on its own wrongdoings, Japan is going astray by seeking to revise its pacifist constitution and boosting its military expenditure, and also tagging along with the US to create more threats for regional security, said experts, who urged Japan to be cautious and not become the "guilty person of Asia" again.

"We will never again repeat the horrors of war. I will continue to live up to this determined oath," Kishida told a secular gathering in Tokyo on Monday. However, his speech largely focused on the damage Japan suffered on its own territory, and did not mention Japan's aggression across Asia in the first half of the 20th century or the victims in the region, the Associated Press reported.

Both the Chinese Foreign Ministry and the Chinese Embassy in Japan sternly criticized the Japanese politicians' actions.

Wang Wenbin, spokesperson of the Chinese Foreign Ministry, said at a Monday briefing that the shrine is a spiritual symbol of the Japanese military's aggression against other countries, and that the Japanese politicians' visit reflected Japan's wrong attitude toward history. China has already lodged solemn representations to Japan via diplomatic channels and expressed our position, said Wang.

Those who backpedal against history will eventually go astray, said Wang.

In response to Japanese politicians' visit to the infamous shrine, a spokesperson from the Chinese Embassy in Japan said on Monday that Japan must recognize and reflect on its own history of invasion and draw a clear line with militarism so as to gain trust from its Asian neighbors as well as the international community. 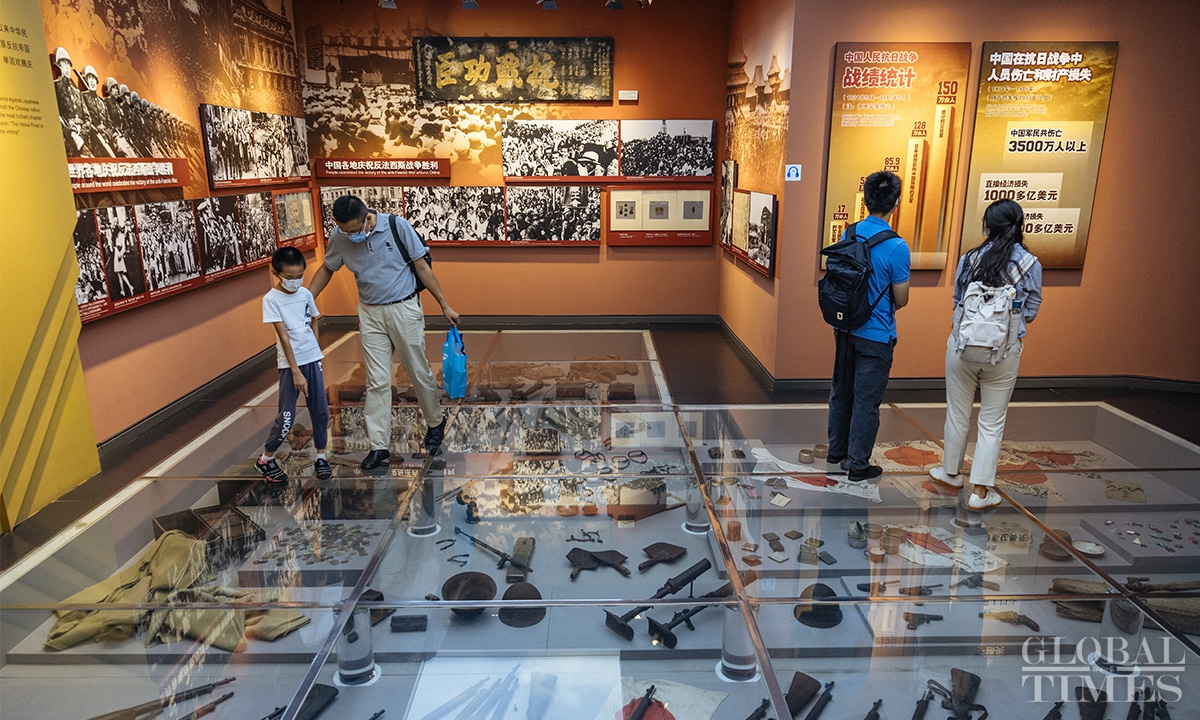 August 15 marks the 77th anniversary of Japan's unconditional surrender in WWII. This is a day to remember history. People visit the exhibition showcasing the glorious course of CPC's victory at the Chinese People's Anti-Japanese Aggression War Memorial Hall in Beijing. Photos: Li Hao/GT

In addition to China, other Asian neighbors of Japan were also aggravated by Japanese politicians' worship of the war criminals-linked shrine.

The South Korean foreign ministry on Monday said in a statement that it expressed deep disappointment and regret over the fact that leaders of Japan once again sent offerings to and paid respects at the Yasukuni Shrine. It also strongly urged the leaders of Japan to squarely face history and demonstrate through actions their humble reflection and sincere remorse for Japan's past actions, the Xinhua News Agency reported.

August 15 was marked by South Korea as National Liberation Day to mark the anniversary of the Korean Peninsula's liberation from the 1910-45 Japanese colonial rule.

This year is the first time the anniversary of Japan's unconditional surrender in WWII has been marked since Kishida took office, so other Asian countries are watching, especially when rising right-wing forces in Japan are pushing the country into militarism, Lü Chao, an expert on Korean Peninsula issues at the Liaoning Academy of Social Sciences, told the Global Times on Monday.

It is worth noting that Japanese media reported Kishida sent an offering to the shrine in his capacity as leader of the ruling Liberal Democratic Party (LDP), and such a sneaky move aims to avoid further angering surrounding countries, as a visit to the shrine by the Japanese prime minister would escalate diplomatic frictions, and also caters to the ring-wing forces within the LDP, Liu Jiangyong, vice dean of the Institute of Modern International Relations at Tsinghua University, told the Global Times. He noted that playing such tricks shows Kishida is also sticking close to the right-wing forces, and exposes the dangerous trend of Japan's views on its war history.

Based on Japan's history of invading neighboring countries, either glorifying the war or refusing to admit the war was an act of provocation and it will surely trigger other Asian countries' antipathy toward it, Lü siad.

South Korean President Yoon Suk-yeol described Tokyo on Monday as a partner in tackling global challenges and said the two nations must overcome disputes dating back to the colonial era, Reuters reported.

Yoon has repeatedly signaled a wish to improve ties with Japan since he took office in May, and the two countries have been holding talks to resolve historical disputes but ended up making little progress, said Lü.

Japan's twisted historical views that still treat South Korea and other countries as its colonies, as well as Japanese politicians' reluctance to recognize its war atrocities, won't help improve its ties with other Asian countries, Lü noted.

According to reports last week, Seishiro Eto, former deputy speaker of Japan's House of Representatives and a lawmaker of the Liberal Democratic Party, recently said, "Japan once colonized South Korea. In a sense, Japan is like an older brother to Korea", and he added, "I don't think the Japan-Korea relationship is equal. Japan should take a leadership position."

Observers said that in addition to sticking to denying the past, Japan is now treading on a more dangerous path of reviving its militarism, with Tokyo speeding up boosting its defense budget and amending its pacifist constitution. It is also serving as a vassal of the US, as well as provoking China on issues including the Taiwan question.

In June, when attending a summit of the NATO in Spain, Kishida said Japan intends to upgrade its partnership with NATO significantly, citing excuse of Ukraine crisis, noting that the security of Europe is inseparable from that of Asia, media reported.

This revealed Japan's strategy of bringing non-regional countries into regional affairs, which is a dangerous trend, as the arrival of extraterritorial forces will easily tear apart the cooperation mechanism of regional countries, thus creating antagonism, a professor from the Institute of International Relations at the China Foreign Affairs University in Beijing, who preferred not to be named, told the Global Times on Monday.

Japan has bungled its diplomatic ties with surrounding countries, partly because it hurt their feelings by sticking to historical revisionism, and also because Tokyo, by hyping up threats in the region, seeks to revise its pacifist constitution and conduct military activities, said the expert, noting that Japan's move has deviated from the development track of "peaceful countries," and seeks to become a "country that can fight a war."

For Asian countries, Japan's tendency will fuel an arms race in the region and create more obstacles for regional stability, said the expert, urging Japan not to become the "guilty person of Asia" again.