WORLD Japanese solidarity with China inspires the fight against coronavirus

Japanese solidarity with China inspires the fight against coronavirus

Screenshot of Matsuyama Ballet's video to cheer up Wuhan

Japanese ballet performers sang March of the Volunteers in a video to encourage Chinese people in their fight against the novel coronavirus. The artists' rendition of the Chinese national anthem went viral on social media. Chinese netizens appreciated Japan for its solidarity amid the epidemic.

Chinese experts said there are always groups in Japan that are friendly to China and make efforts to improve bilateral ties, which are usually affected by historical problems. The two countries have recently stepped up exchanges, demonstrated by the Chinese mainstream media extensively covering Japan's offering of medical supplies. These moves prompted Chinese netizens to express their appreciation.

The current exchanges between the two countries would undoubtedly serve as a good chance for shortening the distance between the two peoples and have positive influence on bilateral ties.

Compelled by Chinese people's efforts fighting against the novel coronavirus, Japan's Matsuyama Ballet made a video in which an impresario said that "for thousands of years, China has taught many previous experience and wisdom to Japan. The most painful moment for human beings is the most previous moment as it could bring infinite power from humans… our friends in Wuhan, the angels of China's medical staff and the great Chinese people, we believe that you will defeat the epidemic and you will overcome all the difficulties."

"We hope China can defeat the epidemic and keep making contributions to the peace of the world and Asia," Matsuyama Ballet responded in an exclusive written interview with the Global Times.

The ballet also said that it is "the first time for 1.5 billion people keep indoors in human history," so they wanted to show their respect to Chinese people's contributions.

Founded in 1948 by Japanese ballerina Mikiko Matsuyama and her husband Masao Shimizu, the Matsuyama Ballet became the first Japanese ballet troupe to visit China after 1949 when they performed White-Haired Girl at Beijing's Tianqiao Theater in 1958.

In 1964, upon their second visit to China, the troupe performed the ballet at the Great Hall of the People. Chinese leaders, including Mao Zedong and Zhou Enlai, watched the show and met with troupe members after the performance.
During the turbulent Sino-Japan relations experienced after World War II, the troupe's continual visits to China became a unique and important bond between the two countries.

Tetsutaro Shimizu and his wife Yoko Morishita, who are the son and daughter-in-law of the troupe's founders, continued to perform the drama.

They told the Global Times in a previous interview that they wish to use White-Haired Girl to express their gratitude toward China, as well as apologize for the pain and misery that Japan had brought the Chinese people during World War II.

Like the Matsuyama Ballet, there have always some China-friendly groups and people in Japan that promoted friendly exchanges even before the two countries normalized their diplomatic relations, Lian Degui, a professor from Shanghai International Studies University, told the Global Times.

Lian noted that these people had less chances to make their voices heard in the Japanese society especially when the bilateral ties strained due to Japanese Prime Minister Shinzo Abe's constitution revision in 2013 and the rise of the right-wing forces in Japan. But some groups never stop pushing for bilateral friendly exchanges.

Aside from art groups, there are many China-friendly groups in Japan. Noticing the shortage of the medical imaging facilities in Wuhan, Canon (China) Co., Ltd donated high-end CT equipment worth of 3 million yuan to save more time for fighting against the novel coronavirus, said Howard Ozawa, Executive Vice President of Canon Inc. and also President & CEO of Canon (China) Co., Ltd.

"There is a saying in Chinese that 'A friend in need is a friend indeed.' By fighting against the novel coronavirus together, China and Japan will deepen mutual understanding and friendship. The bilateral ties will have new developments," Howard said.

With the outbreak of the novel coronavirus, Japan together with many other countries are making efforts to support China.

The kindness and assistance from Japan to China in recent weeks have greatly changed many Chinese people's attitudes. "If there was a poll on Chinese people's feeling toward Japan right now, it would show a surging increase," said Lian.

Assistance from Japan has showed its people's kindness and sincerity, which can help decrease the influence of historical frictions and geopolitical conflicts, Gao Hong, an expert at the Institute of Japanese Studies at the Chinese Academy of Social Sciences, told the Global Times.

"It can be a great chance to show the world how neighbors stand together to overcome public health emergencies and how the two countries are bound together as part of the Asian community and for a shared future for mankind," Gao said. 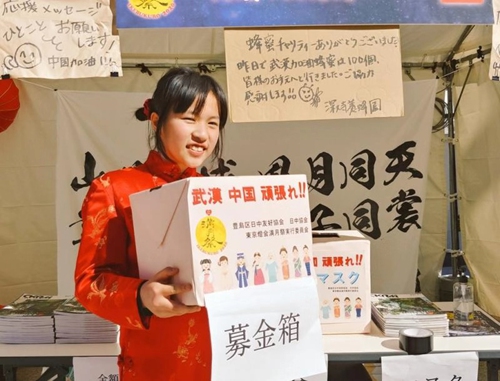 A Japanese girl holds a collection box to raise money during a festival in Tyoko on February 8. （Photo: Courtesy of committee of the 2020 Lantern Festival in Ikebukuro Tyoko）

He noted that "the tradition of mutual assistance was reflected in the 2008 Sichuan earthquake and 2011 Tohoku earthquake, when bilateral assistance never stopped even though political relations faced many challenges.

Chinese Foreign Ministry Spokesperson Hua Chunying told a press conference on February 4 that she was "deeply touched" by Japan's sympathy, understanding and donations.

Instead of making the government's stance clear, the attitudes and remarks of the ruling party's key figures and politicians have showed how hard Japan has balanced between keeping the peace with its ally, the US and improving relations with China, Lian said.

Japan is ready to mobilize the whole country and provide all assistance possible to China in combating the novel coronavirus pneumonia outbreak, Toshihiro Nikai, the secretary general of the ruling Liberal Democratic Party, said during a meeting with Chinese Ambassador to Japan Kong Xuanyou on February 7, the Xinhua News Agency reported.

"Japan has suffered from many kinds of natural disasters. Seeing the serious epidemic in China, the Japanese people are naturally sympathetic," Yutaka Furukawa, a professor at Osaka University of Japan and vice chairman of the International Society for Chinese Language Teaching, told the Global Times.

Both public and private sectors in Japan have volunteered to help Chinese fight against the virus, said Furukawa, adding that many Japanese would rather send masks to someone in China who needs it than wear it themselves.

"This outbreak has also made us all realize how much influence China has over Japan, over Asia, and over the world," said Furukawa. "We are concerned that the current situation in China will have a ripple effect on the global economy, which is already evident now."

Hopeful for the future

Both netizens and people from China and Japan reached by the Global Times expressed their anticipation for better bilateral ties in the future considering the current positive interactions of the two peoples.
Yuna Nakajima, a 29-year-old woman from Tokyo, who has been learning Chinese for 10 years, told the Global Times that she was moved to see the appreciation and gratitude for Japan that many Chinese netizens expressed on Chinese Twitter-like platform Sina Weibo for Japan.

This epidemic brought people of China and Japan closer together, Yuna noted. As a Japanese who is familiar with China, she hopes the relationship between China and Japan gets better and better

After the outbreak, I wish more Japanese visit China to learn more about the real China, Yuna said adding that Chinese culture has a long history and is very fascinating.

Before she came to China in 2012, influenced by historical reasons and negative reports toward China by Japanese media, Yuna also held the stereotype that Chinese don't like Japanese. However, she was impressed by the hospitality and kindness of Chinese people when she first arrived Tianjin in North China.

The Japanese government and media have called for no discrimination against the Chinese people. They emphasized that the epidemic is not China's fault, which also plays a role in the active assistance of the Japanese people to China, Yuna noted.

Yusuke Endo, a 40-year-old Japanese man, told the Global Times that the Japanese people were able to survive the massive earthquake and tsunami on March 11, 2011 when they received support from other countries, especially China. 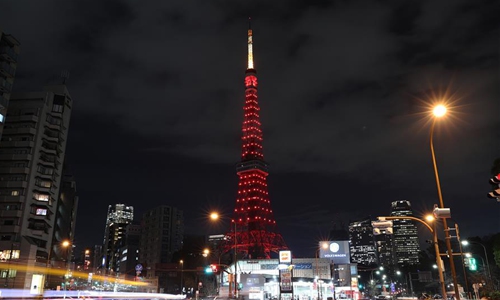 "So now, the Japanese want to help our Chinese friends next door," he said, adding that, "Japan is also afraid of the outbreak, but we all know that Wuhan is the epicenter and China needs more help."

Aside from expressing their appreciation for Japan's help, many Chinese netizens are also exchanging ideas of paying visits to Japan to see the Tokyo Olympic Games.

The 2020 Tokyo Olympic Games, which is scheduled to open in July, and the economic influence on Japan by the epidemic may also be part of the reason for Japan sparing no efforts in helping China, Chinese observers said, noting that China is appreciating any help in need and Japan's current help would improve ties in the near future.