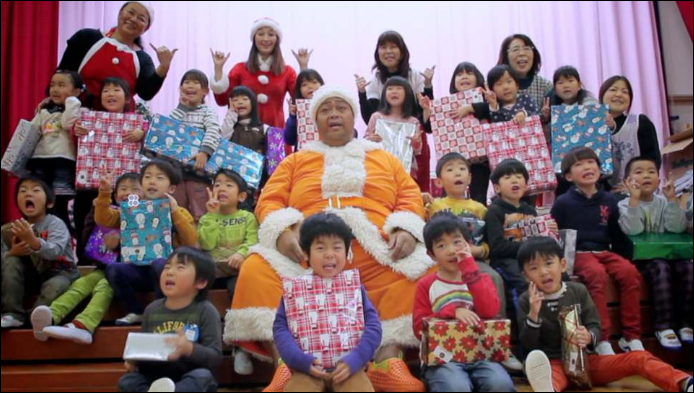 Known to all in Japan as simply KONISHIKI, his career as a sumo champion, musician, and children's educational television star now opens doors for him across generations, as he treks around the country providing aid to those taking shelter from Japan's disasters.

KONISHIKI's warm Hawaiian greetings, gifts, and hot meals are welcomed by those in need.

Born in 1963 in his home state of Hawaii, KONISHIKI came to Japan as a youth, took up the sumo wrestling name Konishiki Yasokichi, and rose to the top ranks.

KONISHIKI wanted to do something to help victims of Japan's frequent weather disasters. He calls his operation "KONISHIKI'S KIDS."

For disaster victims who welcome his assistance with broad smiles, KONISHIKI explains that they are "parents that watched me during my career, kids who are now in college, who watched me getting up in the morning (on NHK educational television)."

Among the dozens of communities assisted, an area that catches KONISHIKI's team's particular attention is Japan's northern Tohoku region, afflicted by the Fukushima earthquake, tsunami, and nuclear crisis. "The goal is to try to get out there as soon as I can," KONISHIKI said.

With many Tohoku residents still living in temporary housing in the long wake of the Fukushima disaster, hot meals of rich sumo "chanko nabe" stew and festively wrapped gifts from KONISHIKI's team have kindled hope during the winter holidays, year after year.

"It's a Christmas project that we did for five years. We delivered over 3,000 gifts. We handed them, personally, per kid, one by one," said KONISHIKI of the long-term project. "I did it with my team, went out to Tohoku for five years in a row. We just kept on going with a four-ton truck."

While KONISHIKI's music, food and gifts make it all look joyful, each "gifting" trip is a lengthy logistical challenge. "It took about three or four weeks, maybe more. I mean, collecting gifts was maybe over two months, and wrapping, it took more than one month to do the work, and everybody was very much involved," said Martin Fluck, director of operations of Oakwood Asia Pacific, whose company has partnered with KONISHIKI's project to assist in making the annual Santa outing.

KONISHIKI summed up the goal of all the smiles delivered: "If that would carry over a day or two, or even a moment, to take their minds off the hardship they're going through."