Beijing (People's Daily) - The United Nations in China organization hosted a conversation titled "The SDGs Decade of Action and the shifting Global Landscape" with the Asian Infrastructure Investment Bank (AIIB) in Beijing on Monday. 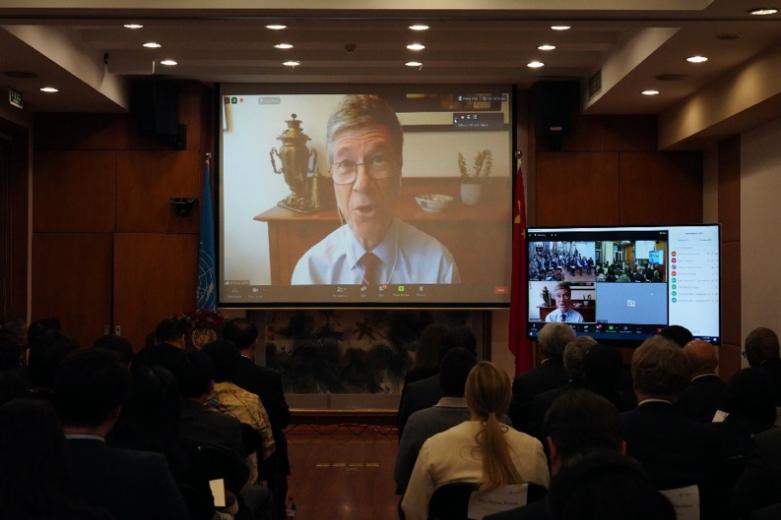 “China shows a path for how it is possible to make profound transformations for wellbeing in a short period of time. China can and should be a decisive leader in the Sustainable Development Goals”, said Sachs during his keynote remarks.

Sachs emphasized the need for China to focus on the remaining challenges, including protecting the gains of poverty reduction, closing gaps between rural and urban areas, and the necessary transformations required to achieve China’s pledge of carbon neutrality by 2060.

“The agenda is enormous, to keep inequalities restrained, to ensure no one is left behind, and to attend to the manifold environmental crises. We need a new kind of development strategy, one that is more holistic, more goal-based, and taking in long-term objectives. I can’t think of a country better than China at this approach,” said Sachs. The conversation also sought to examine how the UN should redefine its cooperation with China in this rapidly evolving context, the opportunities to be seized and the challenges to be addressed.

“We are in a race for the Sustainable Development Goals. This is an important moment for us to converge and connect for the prospects that lie ahead,” said Siddharth Chatterjee, UN Resident Coordinator in China, at his opening remarks.

Attendees mentioned China’s increasing role on the global stage, prominently displayed by its support in international financing and infrastructure projects such as the Belt and Road Initiative.

“China practices multilateralism by deeds, not by words,” said Jin Liqun, President of AIIB. “The SDGs are of great importance, and we hope that AIIB can play a role in boosting the 2030 Agenda alongside our core values as a lean, clean and green institution.”

“COVID-19 has shown us that going it alone does not work. Multilateralism remains the way forward. We share one planet, we share one future, we must stand and act as one,” said Li Baodong, Secretary-General of the BOAO Forum for Asia.