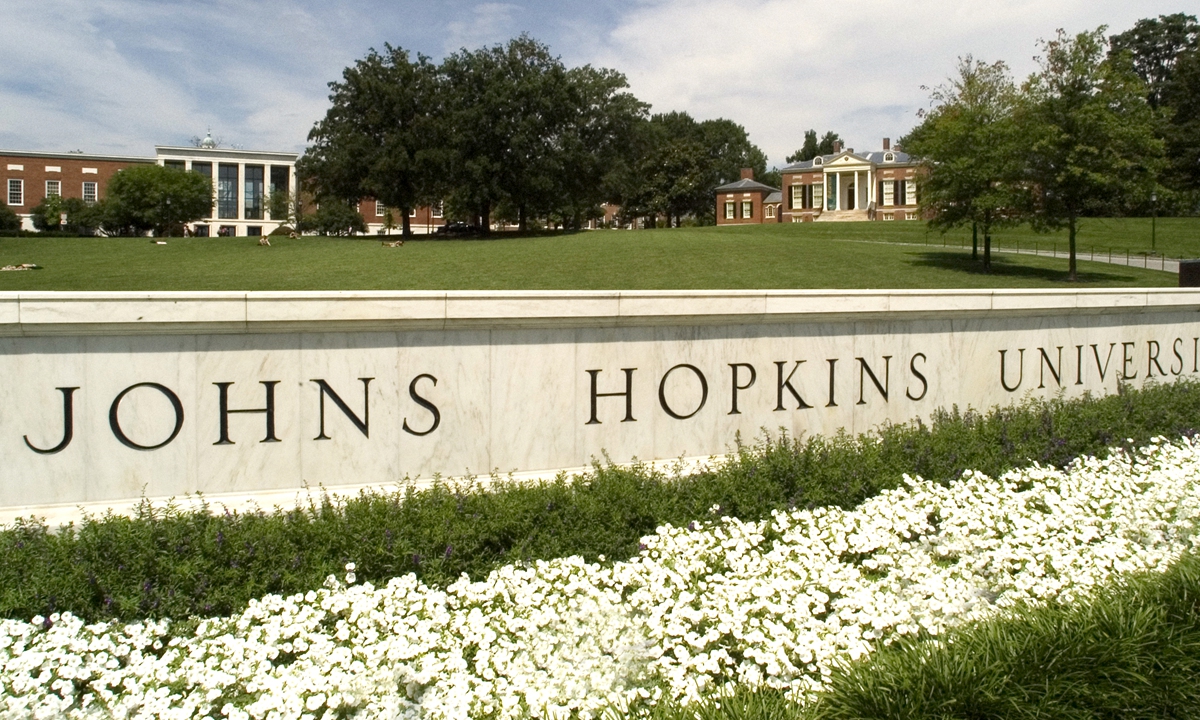 Johns Hopkins University (JHU), which has leading medical programs, has suddenly shifted its policy from accepting WHO-approved vaccines to FDA-approved vaccines, effectively ruling out China-made Sinopharm and SinoVac and India-made Covishield and leaving many already-vaccinated international students no choice but to get re-vaccinated.

Chinese students at the JHU interviewed by the Global Times said they are worried about whether revaccination would lead to side effects and called the new policy "discriminatory."

Ahead of the orientation for the new semester, JHU on August 19 suddenly withdrew its previous policy that accepted WHO-approved vaccines for the green pass on campus, and announced it would only accept FDA-approved vaccines. The list of such vaccines currently includes the Moderna, Pfizer-BioNTech and Johnson & Johnson/Janssen vaccines, according to the news website of the university.

The university explained the policy change came after the FDA claimed that it did not view these WHO-approved vaccines, such as Sinopharm, Sinovax, Oxford/AstraZeneca, Covishield or Novavax, as effective against the more aggressive and highly prevalent Delta variant.

The university said that it would provide free FDA-approved vaccines for international students.

However, observers wonder if that the university, which is famous worldwide for its complete and timely data on the pandemic, failed to set its policy based on scientific proof.

A study by teams led by top Chinese epidemiologist Zhong Nanshan showed that two shots of Chinese inactivated vaccines are still effective in preventing the Delta variant as they showed an overall 59 percent efficacy in preventing symptoms caused by the variant during the outbreak in South China's Guangzhou.

The new policy of the university sparked controversy among international students, with some complaining it is "unfair" and "discriminatory."

A Chinese student surnamed Zhang, who just finished his undergraduate degree at Johns Hopkins University, told the Global Times on Thursday that his friends who continue to study at the university have seen the new policy and many of them took the first dose of Pfizer-BioNTech or Moderna vaccines during their first week after orientation (on Sunday), although they had finished inoculations of domestic vaccines before departing from China.

Some of them felt uncomfortable and slept much longer than usual after receiving Pfizer-BioNTech doses, and some said they suffered from hand pain after receiving Moderna doses, Zhang said, noting he especially worried about a schoolmate who took one dose of Sinovax vaccine and another of Sinopharm vaccine and got revaccinated with Pfizer-BioNTech.

"We are really concerned about mix-and-match vaccines and revaccination," said Zhang, who is also due to start a master's degree in the fall semester at Harvard University.

While ignoring safety concerns over revaccination, JHU allows students to request an exception to the requirement due to religious beliefs, which triggered the international students' questions over the fairness and rationality of the new policy.

"It's discriminatory that the university, which has boasted of its scientific research, views safety concerns over revaccination as not rational, but grants those who hold religious beliefs to have a chance to get exempted from vaccination," another Chinese student, who gave his name as Andy, said.

"It's not fair for international students," an expert surnamed Liu in charge of undergraduate program applications with JJLvip, a Beijing-based educational consulting agency, told the Global Times. Liu said many international students including those from China have received WHO-approved vaccines, but JHU forcing students to revaccinate would make the students anxious and stressed.

The WHO's chief scientist has advised individuals against mixing and matching COVID-19 vaccines from different manufacturers, saying such decisions should be left to public health authorities, Reuters reported in July.

Wang Yuedan, a professor of the department of immunology at Peking University, told the Global Times on Thursday that as the safety data on mix-and-match vaccination is not sufficient, it remains unknown whether this procedure or revaccination is safe.