Jimmy Carter, the former US president who helped set the China-US diplomatic relationship in motion forty years ago, was recognized for his crucial role in an award ceremony this week. 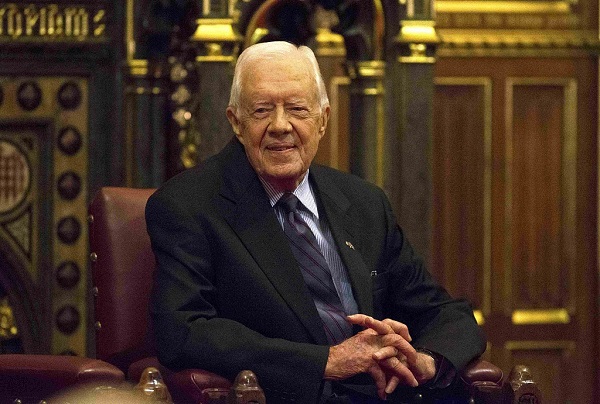 Former US President Jimmy Carter sits after delivering a lecture on the eradication of the Guinea worm, at the House of Lords in London, Britain February 3, 2016. (File Photo: VCG)

At the award ceremony held at the Carter Center here on Wednesday, speakers took the opportunity to look back at how Carter helped normalize what would be considered the most important bilateral relationship in the world, and reaffirm the importance of this bilateral relationship for the peoples of the two countries as well as the world forty years on.

"President Carter took bold and politically courageous action to establish formal diplomatic relations between our nations. That decision not only transformed US-China relations, but indeed quite literally changed the world and for the better," Bush said, explaining why Carter was chosen as the first recipient of the award.

"Intuitively, President Carter understood that normalization was about the long game," Bush said.

Carter, who suffered a fall and underwent subsequent surgery last month, was not present at the ceremony in person. His son Chip Carter received the award in his place.

Chip Carter recalled that normalizing the relationship with China had been a priority for his father going into the presidency, and that an official delegation including Chip Carter was dispatched to China to meet with its top and local officials less than three months into Carter's presidency.

The speakers noted that the statesmanship the two former presidents demonstrated in developing the US-China relationship should be an example for modern-day leaders, as some in Washington are trying to pit the two countries against each other.

"President Bush categorically rejected the notion that China is an enemy or adversary of our nation. On the contrary, he laid out a powerful vision of US-China full partnership and friendship," said David Firestein, president and CEO of the Bush China Foundation, in his remarks.

"Many of us here today are alarmed as President Bush was at the increasing shrillness and anger that we now hear in the rhetoric about China in some US elite circles. President Bush held the view that anger did not make for good policy," Firestein warned.

Firestein noted that both presidents, Carter and Bush, attached great importance to the China-US relationship, and called on Washington to "heed the wise counsel" of the two presidents.

Cui Tiankai, Chinese ambassador to the United States, echoed Firestein in saying there "are yet some irrational dialogues about our relationship."

"Some are clamoring for a decoupling of the two countries and even a new cold war. These attempts are not only questioning the achievements we have made over the past four decades and challenging the very tangible outcomes of our cooperation, but also putting the future of our relations and the prospects for global stability and prosperity at great risk," Cui said.

Ambassador Mary Ann Peters, CEO of the Carter Center, said there is great potential for the two countries to cooperate.

Peters said an idea for a deconfliction committee among countries with a military presence in Djibouti, including the United States and China, has been "turned into a reality with discussion ongoing about how to institutionalize regular meetings."

Firestein said the award would continue to be bestowed and that it would not be limited to US citizens.