WORLD Joe Biden: a new president-elect for the US, yet an 'old friend' for Chinese

Joe Biden: a new president-elect for the US, yet an 'old friend' for Chinese

For some Chinese people, US president-elect Joe Biden maybe a new face and an unfamiliar name they have taken notice of only because of his hard-fought campaign to win the presidency over outgoing President Donald Trump. But many more have remembered him for being the visiting US vice president who dined on noodles in an unassuming Beijing eatery in 2011. 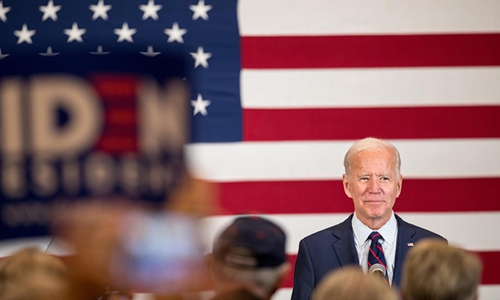 As soon as US media outlets projected that Biden had won the race for the White House on Saturday US time - in the wee hours of Sunday morning in China - his name has been trending on Chinese social media platforms, with most netizens speculating what his policy priorities might be. In what has become known as "noodle diplomacy," Yao's Chao Gan, the family-run restaurant he visited, went viral again.

Many netizens posted old pictures of Biden dining in the restaurant on Sina Weibo, urging the shop to roll out the order as the "President Package," which was previously known as the "Biden Set." This included five bowls of black bean sauce noodles, 10 steamed buns, smashed cucumber salad, mountain yam salad, shredded potatoes and Coca-Cola, media reported. Others urged people to order something from the special restaurant on this special occasion.

Yao Long, owner of the restaurant located in the historical center of Beijing, referred to Biden as "an old friend," although he can only vaguely recall the day Biden made a sudden visit to his restaurant, as it was too long ago. "I sincerely congratulate him on being elected US president, as he once was a guest in our restaurant," Yao said.

But not every Chinese liked Biden's down-to-earth move at the time, which some observers thought was cheap as it had clear purpose to touch Chinese people, who were not familiar with American-style democracy. Observers noted that such a trick will not wash with Chinese people any longer.

After Biden's presidency was called by media, Chinese analysts also warned that it will not change the overall direction of Washington's China policy. Regardless of who resides in the White House, the US will to some extent maintain its current approach toward China.

"We should not put too much expectation on Biden, because to contain and confront China is a strategic consensus between the two parties of the US," Jin Canrong, associate dean of the School of International Studies at the Renmin University of China in Beijing, told the Global Times on Sunday.

The victory of Biden, who "represents the pro-establishment camp of the US," would make some voices within China harbor the illusion of a US policy reversal, Jin said, but China should "keep vigilant and stick to the right path of strengthening self-reliance."

Some netizens also referred to Biden as an "old friend," as his visit to China, including watching a basketball match, bringing his Chinese-learning granddaughter to China and visiting suffering people from then earthquake-stricken Sichuan Province, have left a positive imprint in some people's memories.

Yet many visitors to the restaurant said they have no idea who Biden is. Only an elderly Beijing resident who was passing by said he is familiar with the name, as he knew Biden had visited the restaurant when he was US vice president. But when asked to comment on the election, he told the Global Times: "I don't care. It is US affairs."

Some enthusiastic Chinese netizens also dug into Biden's history of battling adversity. He overcame a stammer, lost his beloved first wife and a daughter in a car crash and later his son Beau to cancer, and failed at two previous attempts to become president, but finally claimed the crown at the senior age of 78, which is being hailed by many netizens as "inspiring."

"Close to the people is Biden's personable approach, which helps him win favor from the public," Zhang Tengjun, an assistant research fellow at the China Institute of International Studies, told the Global Times on Sunday, giving the example of him taking a knee as an anti-racist gesture which became popular during the Black Lives Matter protests.

Yet Chinese people's attention and enthusiasm is only temporary, as the bumpy road of China-US relation has taught them a hard lesson that the US' antagonistic policies toward China will not stop, no matter who the president is.

Echoing Zhang, many netizens expressed the same view. "The US already views China as an enemy as China is rising so fast tat it threatens their role as world leader, so no matter who the president is, he (or she) will be hard on China. We need to rely only on ourselves, and quicken the pace of our development," said one netizen.

"Maybe Biden's victory benefits Yao's Chao Gan more than the trend of China-US relations. As Chinese people, we need to discard our illusions," said another netizen.