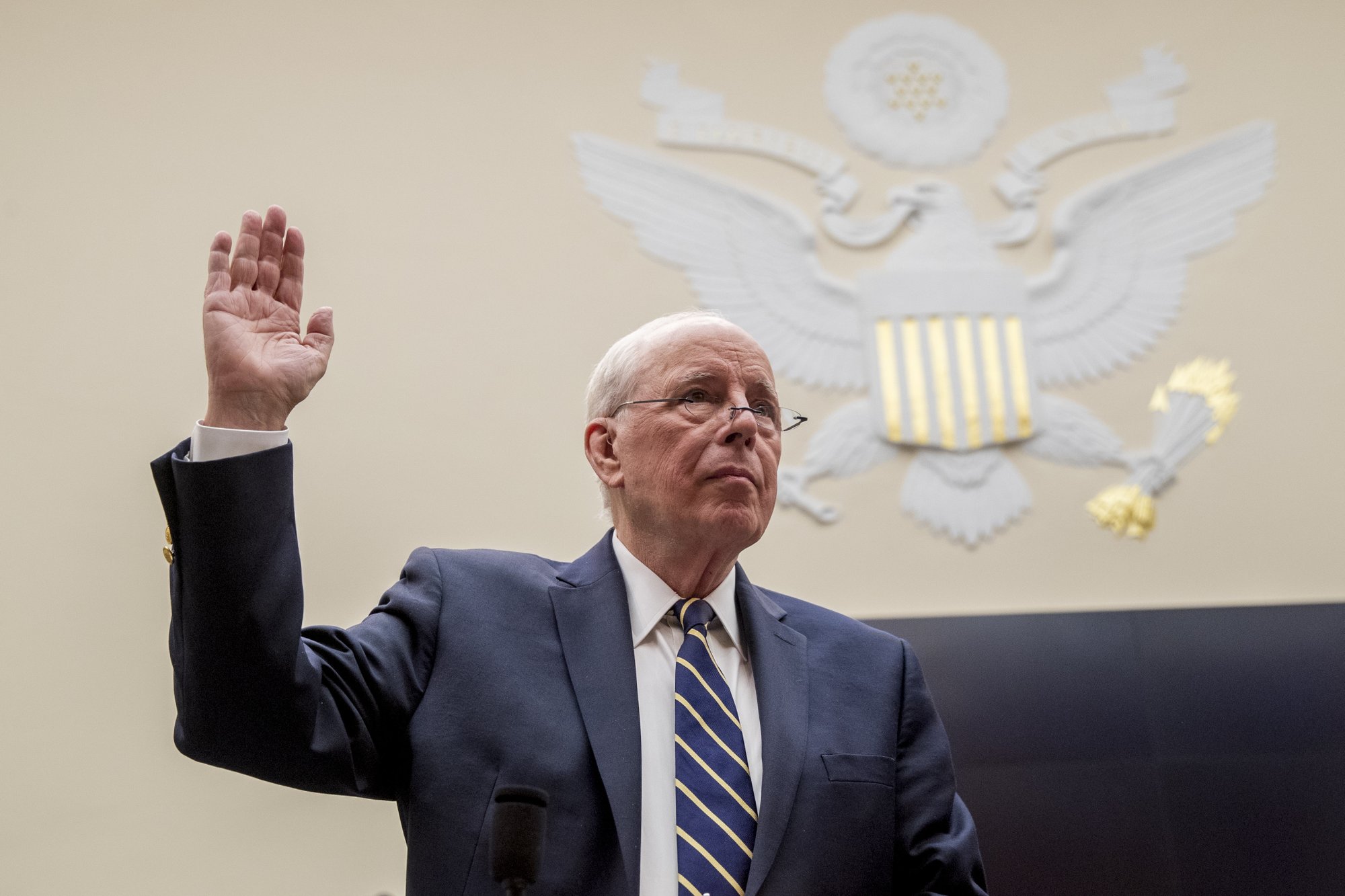 Former White House counsel for the Nixon administration John Dean is sworn in before a House Judiciary Committee hearing on the Mueller Report on Capitol Hill in Washington, Monday, June 10, 2019. (Photo: AP)

John Dean, a star witness during Watergate who helped bring down the Nixon presidency, testified Monday that special counsel Robert Mueller has provided Congress with a “road map” for investigating President Donald Trump.

He told the House Judiciary Committee he saw parallels between Mueller’s findings and those of congressional investigators looking into Richard Nixon’s administration decades ago. He pointed to the way the presidents used their pardon power in an attempt to influence witness testimony, and their efforts to seize control of investigations and direct the efforts of prosecutors.

Dean, who served as White House counsel, testified as House Democrats opened three days of sessions aimed at focusing public attention on the findings of the Russia investigation and Trump’s actions.

“We have a responsibility to do this work, to follow the facts where they lead,” said Chairman Jerry Nadler, D-N.Y., as he gaveled in the hearing. He said the intent was to make certain “no president, Democrat or Republican, can ever act in this way again.”

Trump, apparently watching the televised hearing, tweeted, “Can’t believe they are bringing in John Dean, the disgraced Nixon White House Counsel.” He added his oft-repeated claim, “No Collusion - No Obstruction!”

Ahead of the hearing, Nadler announced that the Justice Department has agreed to turn over some of the underlying evidence from Mueller’s report, including files used to assess whether Trump obstructed justice.

In the first breakthrough in weeks of negotiations over the report, Nadler said the department will begin complying with the committee’s subpoena on Monday and provide some of Mueller’s “most important files.” He said all members of the committee will be able to view them.

Nadler said in response to the agreement Democrats would not vote on holding Attorney General William Barr in criminal contempt, for now. Instead, the House will vote Tuesday on a resolution that would empower the Judiciary Committee to file a civil lawsuit for Mueller materials.

The Justice Department is “pleased the Committee has agreed to set aside its contempt resolution and is returning to the traditional accommodation process,” said spokesperson Kerri Kupec. She said the department “remains committed to appropriately accommodating Congress’s legitimate interests related to the Special Counsel’s Investigation and will continue to do so provided the previously voted-upon resolution does not advance.”

The deal is unlikely to give Democrats all of what they were requesting — including an unredacted version of the report and secret grand jury testimony.

At the same time, the Justice Department announced it was stepping up its counter-probe into the origins of the Russia investigations, a priority for Trump and his Republican allies on Capitol Hill.

The department said Monday it has asked intelligence agencies to preserve all relevant records and access to witnesses.

Dean was supposed to be the headliner Monday, but some of the strongest testimony came from two former US attorneys who served during the Obama administration, Barbara McQuade and Joyce Vance, who have become regulars on cable news shows, analyzing developments in the Mueller investigation and offering criticism on Twitter of the president’s conduct. Dean said it was the first time he had testified since 1974.

The top Republican on the Judiciary Committee, Rep. Doug Collins of Georgia, dismissed Dean as a “godfather” figure, and Rep. Jim Jordan, R-Ohio, criticized Dean’s work and noted he pleaded guilty during the Nixon era.

The slate of televised sessions on Mueller’s report means a new, intensified focus on the Russia probe and puts it on a path that some Democrats hope leads to Trump’s impeachment. They are trying to aim a spotlight on allegations that Trump sought to obstruct a federal investigation as well as his campaign’s contacts with Russia in the 2016 election.

And they will lay the groundwork for an appearance from Mueller himself, despite his stated desire to avoid testifying.

On Wednesday, the House Intelligence Committee intends to review the counterintelligence implications of the Russian meddling. Mueller said there was not enough evidence to establish a conspiracy between the Trump campaign and Russia, but he said he could not exonerate Trump on obstruction.

On Tuesday, the House has scheduled the vote to authorize lawsuits against Barr and former White House counsel Donald McGahn for failing to comply with subpoenas from the Democratic-controlled House. The vote will put the full House on record approving the lawsuits, if leaders and committees decide they want to move forward with them.

Barr had defied a subpoena to provide an unredacted version of Mueller’s report, along with underlying evidence. McGahn, who is frequently referenced in the report, has defied subpoenas to provide documents and testify before the House Judiciary Committee.

Language in the resolution also would make it easier for committee chairmen to take the Trump administration to court. The chairmen could take legal action to enforce subpoenas in the future without a vote of the full House, so long as the chairmen have approval from a five-person, bipartisan group where Democrats have the majority.

With Trump pledging that “we’re fighting all the subpoenas,” Democratic leaders want to avoid repeated floor votes on contempt resolutions that would detract from their legislative agenda.

The procession of hearings and votes in the week ahead is partly designed to mollify anxious Democrats who have pushed House Speaker Nancy Pelosi, D-Calif., to begin impeachment proceedings immediately. Pelosi has rejected that option, preferring a slower, more methodical approach to investigating the president, including the court fights and hearings.

During a meeting with Nadler and other committee heads last week, Pelosi made the case that she would rather see Trump voted out of office and “in prison” than merely impeached, according to a report in Politico. A person familiar with the exchange confirmed the account to The Associated Press.

Educating the American public on what is in the Mueller report is a priority for Democrats, who believe Trump and his allies have created the public impression that the report said there was no obstruction of justice. Trump has made that assertion repeatedly, echoing Barr’s judgment that there was not enough evidence in the report to support a criminal obstruction charge. Mueller said in the report that he could not exonerate Trump on that point.

The special counsel did not find evidence to establish a criminal conspiracy between Trump’s campaign and Russia. But the report details multiple contacts between the two.