More than 100 Chinese students at Johns Hopkins University in the US on Thursday night (US time) protested against speeches made by Hong Kong secessionists Joshua Wong Chi-fung and Nathan Law Kwun-chung. 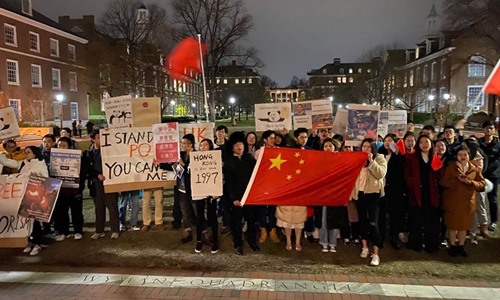 Inside and outside the speech hall, the Chinese students held banners that read "Hong Kong is part of China" and "Condemn violence" and also chanted patriotic slogans.

Wong and Law were invited by the Johns Hopkins Foreign Affairs Symposium (FAS) to deliver a speech on Hong Kong's so-called democratic movement. The two activists became known for their leading roles in the 2014 Occupy Central movement in Hong Kong. They were also firm supporters of the violent protests that have engulfed the city since June last year.

Wong only appeared in a live video. The Global Times learned that Wong's passport was withheld by a Hong Kong court, so he could not attend the symposium in person.

Hong Kong's Eastern Court imposed a travel ban on Wong on August 30, 2019 after he was charged with organizing, taking part in, and inciting others to take part in an unlawful assembly outside the Wan Chai police headquarters on June 21, 2019.

In November, Wong was banned by the Hong Kong court from traveling to London to receive a so-called human rights award from the British parliament, despite Wong's application to vary his bail conditions and lift the travel ban.

Also in November, hundreds of Chinese students protested against what they called biased messages about Hong Kong protests as Law attended an event at New York University.

Law was notorious for inciting student protesters to go onto the streets while he himself went to the US to study.

When asked by students if he would cut ties with violence and condemn violent behavior on Thursday night, Law tried to avoid the question and said he wanted to discuss whether it was the government's system that forced protesters to resort to extreme means.

After Wong and Law were invited by the Johns Hopkins FAS, three Chinese students, on behalf of 2,355 others, sent a letter to the university administration questioning the decision of FAS to invite secessionist figures.

"They not only attempt to separate Hong Kong from China. Their so-called fight for democracy and justice and the protests they have supported brought to Hong Kong brutal violence, terror-like behavior as well as far right nativist and racist hatred toward Chinese mainlanders. So we feel we should do something," Zhang Shang, a fourth-year student at Johns Hopkins and one of the three students, told the Global Times Friday.

However, in its reply, the university said that FAS' decision was "independent of input from the University" and claimed that freedom of expression and intellectual debate are fundamental values of the university.

"Then we students are also free to express our opinions to oppose the speeches by Wong and Law," said Zhang, who helped organize Thursday's protests, adding that their activities followed the university rules.