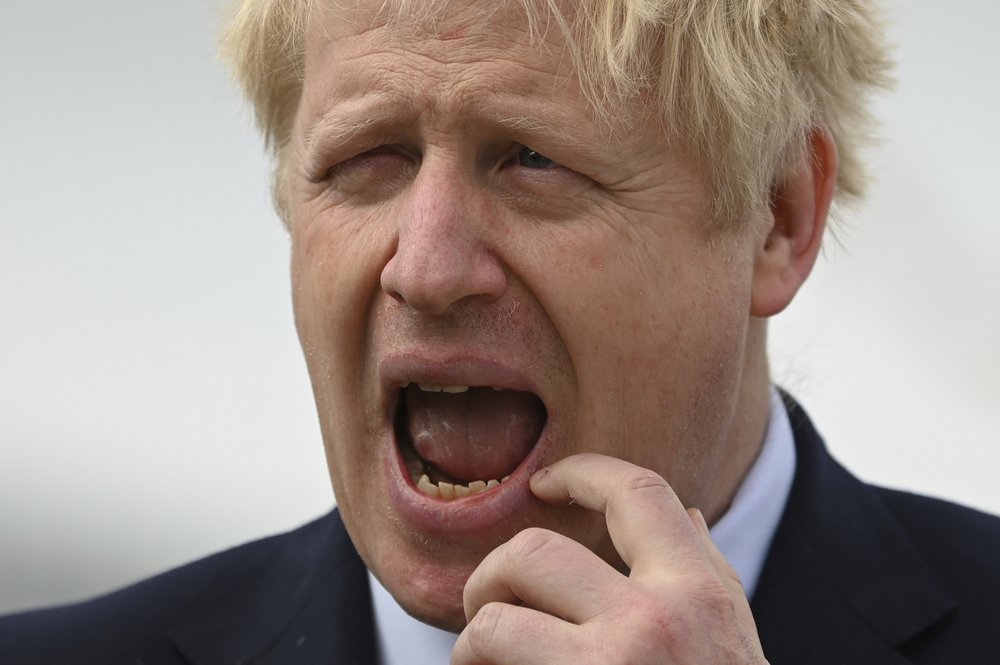 The British government insisted Thursday that its forecast of food and medicine shortages, gridlock at ports and riots in the streets after a no-deal Brexit is an avoidable worst-case scenario, as Prime Minister Boris Johnson denied misleading Queen Elizabeth II about his reasons for suspending Parliament just weeks before the country is due to leave the European Union.

In better news for the embattled British leader, a Belfast court rejected claims that the Conservative government’s Brexit strategy should be ruled illegal because it risked undermining Northern Ireland’s peace process.

Johnson took office in July vowing to get Brexit done on the scheduled Oct. 31 date, even if there is not a divorce deal to smooth the way. But many lawmakers, economists and businesses fear a no-deal Brexit would be economically devastating and are fighting him every step of the way.

This week, Parliament forced the government to publish its official assessment of the impact of leaving the EU without a withdrawal agreement.

The six-page classified document, dated Aug. 2, said customs checks meant the number of trucks crossing the main freight route between Calais and Dover would drop by between 40% and 60% within a day of a no-deal Brexit, with disruptions lasting up to three months. The supply of certain types of fresh foods and essential medicines would decrease, prices would go up and the poor would be hit hardest, it said.

The paper also described major disruptions for travelers between Britain and the EU and uncertainty for UK citizens living in Europe, and it said attempts to maintain an open border between Ireland and Northern Ireland would probably fail. It also said a no-deal exit could trigger major protests and even riots.

Johnson insisted the bleak scenario was “not where we intend to end up.”

“This is a worst-case scenario which civil servants obviously have to prepare for, but in the last few months, and particularly in the 50 days since I’ve been prime minister, we’ve been massively accelerating our preparations,” he said.

Opposition politicians said the “Operation Yellowhammer” document — the government’s code name for its Brexit preparations — proved that Johnson is reckless to consider leaving the bloc without a deal.

Former Attorney General Dominic Grieve said it was extraordinary that a UK government “is content on inflicting on the British public the level of disruption which is set out in the Yellowhammer papers.”

Defense Secretary Ben Wallace said the scenario was a “planning assumption” and would only come true if the government did nothing to offset it.

“We are spending the money on doing lots of things to mitigate those assumptions,” he told the BBC.

The government said it would publish an updated version of the assessment soon that would show how much progress had been made.

The government refused to comply with another part of Parliament’s demand — that it hand over email and texts among officials and aides discussing the government’s decision to suspend Parliament in the run-up to the Brexit deadline. Michael Gove, the minister in charge of Brexit planning, said the request was inappropriate and disproportionate.

The order to release the Yellowhammer document was one of a series of blows to the government by opposition lawmakers and rebel Conservatives. They also passed a law that orders the government to seek a three-month delay to Brexit if no agreement has been reached by late October, and rejected Johnson’s call for a snap general election.

After suffering six defeats in the House of Commons in as many days, Johnson suspended Parliament for five weeks until Oct. 14, sparking outrage among legislators and several legal challenges.

The U.K. Supreme Court is set to consider next week whether the shutdown should be reversed, after conflicting rulings in lower courts.

Last week, the High Court in London said the decision was inherently political and “not a matter for the courts.” But Scotland’s highest civil court ruled Wednesday that the shutdown was illegal “because it had the purpose of stymieing Parliament.”

Johnson insists he suspended Parliament so that he can launch a fresh domestic agenda at a new session next month. He said he had “absolutely not” misled the queen — whose formal approval was needed to suspend Parliament — about his motives. Critics say Johnson must resign if it turns out he lied to the monarch, who is Britain’s head of state and is bound to act on the advice of her prime ministers.

In Northern Ireland, claimants had argued that a no-deal Brexit would undermine agreements between the British and Irish governments that were struck during the peace process.

A no-deal Brexit could lead to the return of a hard border between the UK’s Northern Ireland and EU member Ireland. An open border is crucial to the regional economy and underpins the peace process that ended decades of sectarian violence in Northern Ireland.

Judge Bernard McCloskey ruled that the “claim and counterclaim, assertion and counter-assertion, allegation and denial, blow and counter-blow” of the raging Brexit arguments belonged in the world of politics, not law.

“Virtually all of the assembled evidence belongs to the world of politics, both national and supra-national,” he said.

If the claimants appeal the ruling, the case could join the two other legal challenges to Johnson’s Brexit plans before the Supreme Court next week.

Johnson said Thursday he was “working very hard” to strike a new deal with the bloc after the agreement made by his predecessor Theresa May was rejected three times by Britain’s Parliament.

Johnson’s envoy David Frost has been holding talks in Brussels this week but no breakthrough has been made, and the EU says it is still waiting for firm proposals from the UK.

“The UK hasn’t proposed any alternatives and anything that’s been legally credible and workable,” said European Parliament President David Sassoli.

The bloc’s chief Brexit negotiator, Michel Barnier, told reporters that “we are still ready to examine objectively any concrete and legally operational proposals from the UK.”