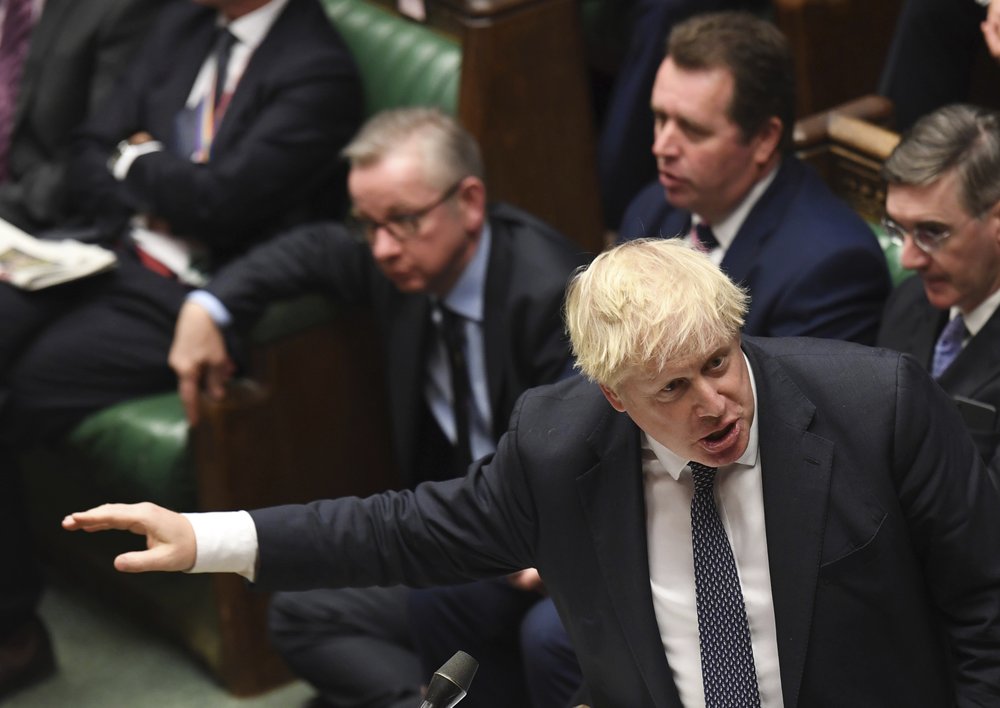 Prime Minister Boris Johnson has long argued that Brexit will let Britain “take back control” from the European Union.

On Wednesday, Johnson’s future, and his country’s, rested on a decision from Brussels about whether the bloc will delay the UK’s scheduled departure to prevent a chaotic no-deal exit in just eight days.

“I don’t think the people of this country want a delay. I don’t want a delay,” Johnson said.

But a postponement appeared inevitable after British lawmakers blocked the prime minister’s attempt on Tuesday to fast-track his Brexit bill through Parliament so that the UK can leave the bloc as scheduled on Oct. 31.

The decision means the UK is almost certain to miss that deadline and leaves Johnson with two options : try again to pass the stalled deal, or seek an early election that could break Britain’s Brexit impasse.

Both courses depend on the EU’s response to the UK’s request for a three-month delay. The request was ordered by Parliament to avert the economic damage that could come from a no-deal exit and made, grudgingly, by Johnson on Saturday.

“Alas, we cannot now know what the EU will do in response to the request from Parliament — I stress it wasn’t my request — to ask for a delay,” Johnson told British lawmakers Wednesday. “I will be studying their reaction very closely to see how we proceed.”

European Council President Donald Tusk said in a tweet that because of Tuesday’s votes in London he would recommend that the other 27 EU nations grant Britain a delay.

European Parliament President David Sassoli echoed that sentiment, saying that European leaders should accept the Brexit extension because that will “allow the United Kingdom to clarify its position and the European Parliament to exercise its role.”

Johnson won a major parliamentary victory on Tuesday when lawmakers backed his Brexit plan in principle, voting 329-299 to pass a bill to implement the divorce agreement that Johnson struck with the EU last week. But minutes later, legislators rejected his fast-track timetable by a vote of 322-308, saying they needed more time to scrutinize the bill.

Without speedy passage of the bill, Britain won’t be able to make an orderly exit from the bloc on Oct. 31, a central vow of Johnson’s 3-month-old Conservative administration.

House of Commons leader Jacob Rees-Mogg conceded that “it is very hard to see how it is possible” to leave the EU with a deal by that deadline.

In London, talk quickly shifted Wednesday to holding an early election, which could give the Conservatives a majority in Parliament, allowing Johnson to push through his plans.

British Justice Secretary Robert Buckland told the BBC that Parliament’s failure to break the logjam means “we are left with the option of a general election. ... That seems to me to be the only way to break this impasse.”

Britain’s next scheduled election is in 2022. If Johnson wants an early election, he needs to win a vote in Parliament calling for one, or lose a no-confidence vote, which so far opposition parties have refused to call.

The main opposition Labour Party said it would “support a general election when the threat of a no-deal crash-out is off the table.” That could come if the EU formally offers an extension in the next few days.

All 27 other EU leaders must agree to an extension, which would be the third time Britain’s departure date, originally set for March, has been postponed.

The bloc’s other members are weary and frustrated at Britain’s interminable Brexit melodrama. But they also want to avoid the economic pain that would come to both sides from a sudden and disruptive British exit, so when push comes to shove they are likely to offer a delay.

Chancellor Angela Merkel’s spokesman, Steffen Seibert, said Wednesday that “an extension will not fail because of Germany.”

Irish Prime Minister Leo Varadkar said Ireland would support a delay until Jan. 31 “that could be terminated early if the House of Commons and House of Lords ratifies an agreement.”

But with some countries — notably France — more reluctant, Varadkar said EU leaders might have to hold an emergency summit to seek unanimity.

“My bags are always packed for Brussels, and packed they are again,” he told lawmakers in the Irish Parliament.

Meanwhile, Johnson has not abandoned his Brexit deal, which sets out the terms of Britain’s departure from the EU after almost five decades of membership.

Parliament’s vote Tuesday to approve the Brexit bill in principle was an important milestone — the first time since Britons chose in 2016 to leave the EU that lawmakers have backed a Brexit plan.

Some legislators urged Johnson to push on with the passage of the bill, saying it could pass if lawmakers had time to study it properly.

“I would have thought it can be done in a matter of weeks,” said Labour lawmaker Richard Burgon.

Johnson’s Conservatives lack an overall majority in Parliament, so he would need support from the opposition and independent lawmakers to pass the bill, and numbers are tight.

“One way or another, we will leave the EU with this deal to which this House has just given its assent,” Johnson told lawmakers after Tuesday’s votes.