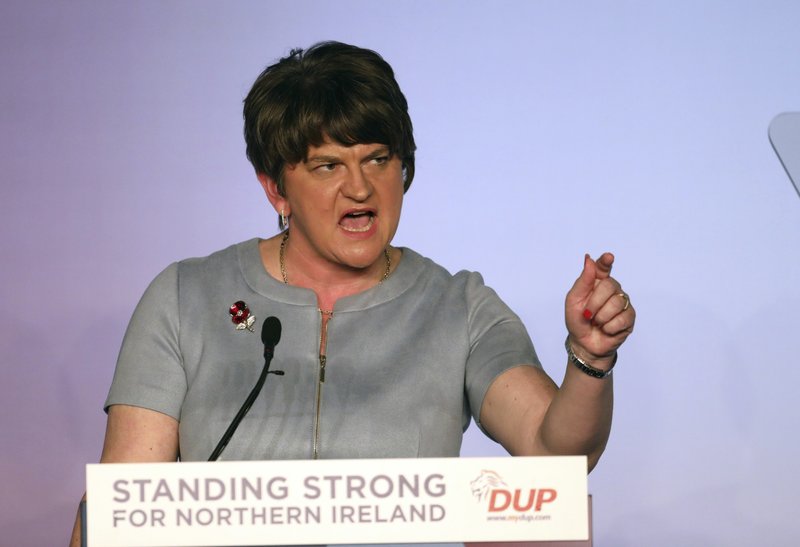 Boris Johnson’s allies in Northern Ireland vowed Saturday to keep rejecting the British prime minister’s divorce deal with the European Union until his government wins more concessions from the bloc.

Arlene Foster, the leader of Northern Ireland’s Democratic Unionist Party, said she demanded honesty from the British government. She told her party conference in Belfast that regulatory and customs borders between Northern Ireland and the rest of the United Kingdom were not acceptable.

“We will not give support to the government when we believe they are fundamentally wrong and acting in a way that is detrimental to Northern Ireland and taking us in the wrong direction,” she said. “We will oppose them and we will use our votes to defeat them.”

Her comments are important because Johnson needs more votes in Parliament than just his Conservative party to get his Brexit deal passed.

“Let me say clearly from this platform today that we want to support a deal that works for the whole of the United Kingdom and which does not leave Northern Ireland behind,” she said. “But without change, we will not vote for the prime minister’s agreement.”

Parliament has already dealt Johnson a series of setbacks and derailed his promise to take Britain out of the EU by the end of the month “come what may.” Johnson has now pinned his hopes on an early general election, calling for one on Dec. 12, but how Britain will solve its Brexit stalemate is still completely up in the air.

Less than a week before Britain is scheduled to leave the EU, ambassadors from the bloc’s 27 other nations agreed to grant the U.K.’s request for another extension to the Brexit deadline — but they did not settle on how long that delay should be. More talks on that are expected in the upcoming week.

Britain is scheduled to leave the 28-nation bloc on Oct. 31 after its original March 29 departure date was postponed twice. The U.K. has asked for a three-month extension as Johnson struggles to get lawmakers to pass the divorce deal he agreed upon with the bloc.

“Johnson’s sell-out Brexit is a blueprint for a deregulated economy, where vital rights and protections are torn up. He has no intention of upholding our high standards after we leave the EU,” Labour leader Jeremy Corbyn said. “You can’t trust a word Boris Johnson says.”

Yet his allies in Northern Ireland say Brexit’s impact on the United Kingdom will be the sole prism through which they will judge any Brexit deal.

DUP deputy leader Nigel Dodds said it would be “economic madness” to support Johnson’s current Brexit deal, claiming it would separate Northern Ireland from the rest of the UK.

“Going forward, the Democratic Unionist Party will look at every proposal, every legislative provision, and every amendment through one prism and one prism only: How does this best protect the union of Great Britain and Northern Ireland?” he asked.

He rejected those who portray the latest Brexit deal, which would see Northern Ireland align with the EU’s single market rules but remain part of the U.K.’s customs territory, as the “best of both worlds.”

“This is the worst of all worlds,” he told the DUP’s annual conference in Belfast. “It would be economic madness for Northern Ireland to stand by and allow ourselves to have such impediments put in the way of trade with our largest market within our own borders.”

Top police officials have voiced fears of increased violence in Northern Ireland if any barriers are erected on its now-invisible border with Ireland. To address those and other concerns, Johnson put a trade border in the Irish Sea, but his allies are upset because that treats Northern Ireland differently than other parts of the U.K.

Dodds directly quoted from Johnson’s speech at the same event last year, when he pledged not to erect economic barriers in the Irish Sea.