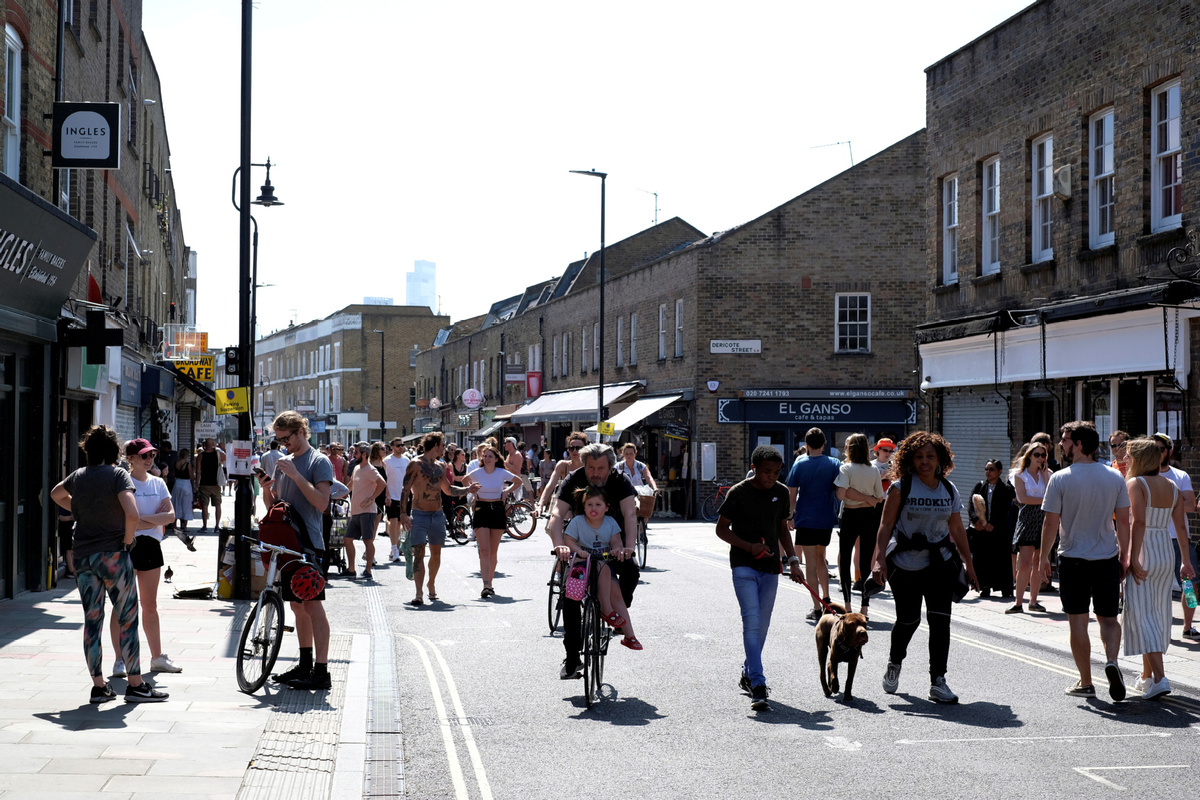 People walk and cycle along Broadway Market, following the outbreak of the coronavirus disease (COVID-19), London, Britain, May 9, 2020. (Photo: Agencies)

Employees and business leaders in the United Kingdom have expressed confusion following a televised speech during which Prime Minister Boris Johnson set out his blueprint for the nation's reemergence from its novel coronavirus-induced lockdown.

Johnson's blueprint included a call for employees who are unable to work from home to return to the workplace if it can be done safely and without overcrowding public transport.

The British Chambers of Commerce, an umbrella organization for the UK's 52 accredited chambers that represent 75,000 businesses, said many companies are unclear about whether they can reopen, and about what constitutes a safe workplace.

"Businesses need their practical questions answered, so they can plan to restart, rebuild, and renew," the organization's director, Adam Marshall, told the BBC.

He added that "businesses will need to see detailed plans for the phased easing of restrictions, coordinated with all nations across the UK and supported by clear guidance".

He said companies want to know "what will need to change in the workplace" to comply with safe working practices.

Johnson specifically mentioned construction workers and employees in the manufacturing sector as the sort of staff who might be able to return to work this week.

Jonathan Geldart, director general of the Institute of Directors, said companies will not want to reopen unless they are sure they are doing the right thing.

"Directors need to have confidence that it's safe, and that if they act responsibly they won't be at undue risk," he said. "Businesses should consult with their people to put in place robust policies, which in many cases might not be an overnight process."

Carolyn Fairbairn, director general of the Confederation of British Industry, told the BBC companies are eager to reopen "but they also know putting health first is the only sustainable route to economic recovery".

Johnson did say in his speech that employers will receive guidance on how workplaces can be made safe.

But Frances O'Grady, general secretary of the Trades Union Congress, which represents unions advocating for around 5.6 million workers, said the guidance should have been issued before Johnson called for people to return to work.

She said in a Twitter message that "lots of working people will feel confused and anxious after listening to Boris Johnson" and that the situation was a "recipe for chaos".

Leaked reports suggest the government will tell employers to stop workers from sharing desks or touching communal equipment. Workers are also likely to be asked to stagger their start and finish times, to reduce overcrowding on buses and trains.

The opposition Labour Party questioned whether the call for people to return to work was influenced by the cost of the furlough program, which directs taxpayer money toward employees who are unable to go to work and who cannot work from home.

Labour leader Keir Starmer said: "I think what the country really wanted … was clarity and a real sense of consensus, and I don't think we've got either."

He said Johnson's speech "raises as many questions as it answers".

And the government has also been attacked by major players in the retail and property sector, who say the nation's business bailout package of reliefs, grants, and loans is inadequate to prevent the "imminent collapse of many businesses".

The British Retail Consortium and the British Property Federation said in a joint letter to the UK's small business minister and Chancellor of the Exchequer Rishi Sunak that the crisis "facing parts of the retail sector… must be addressed urgently".

The letter claims around one quarter of retailers can no longer afford to pay their rent and should be granted respite.

It says: "Even once the lockdown starts to be lifted (companies) will take a considerable time to recover, with continued public health measures both impacting on their revenue and meaning increased operational costs."