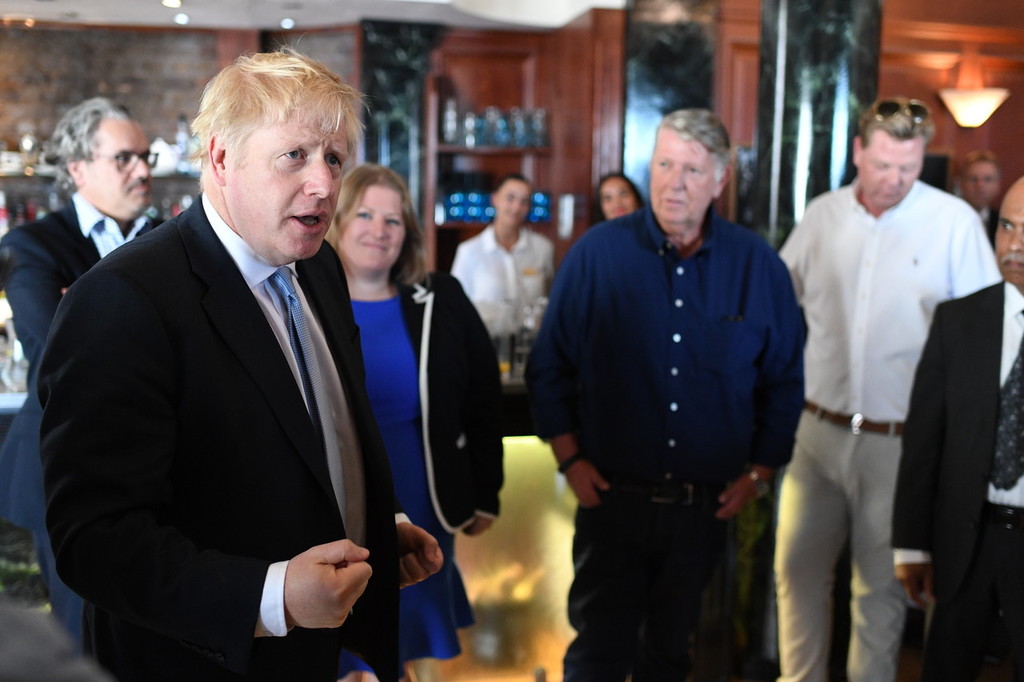 Former Foreign Secretary Boris Johnson (L) campaigns in Portsmouth, Britain, June 27, 2019, during his bid to become the new Leader of the Conservative party and to replace Theresa May as Britain's new Prime Minister. (Photo: IC)

Britain's Conservative Party leadership contest frontrunner Boris Johnson has backtracked on his previous comments made on Brexit negotiations, saying there is only a "million-to-one" chance that the United Kingdom will leave the European Union without a deal.

Just a day after he stoked concern by promising in a radio interview to leave the EU on Oct 31 "come what may, do or die" with a no-deal Brexit, Johnson stated he did not believe that was where Britain would "end up".

In a Conservative party hustings on Wednesday evening, Johnson said: "It's absolutely vital that we prepare for a no-deal outcome if we're going to get the deal that we need.

"I don't think that's where we're going to end up — I think it's a million to one against — but it's vital that we prepare."

The EU has said it will not return to Prime Minister Theresa May's withdrawal deal, rejected three times by UK Parliament, and experts are sceptical a new prime minister can secure any changes to the controversial Northern Ireland backstop hated by Eurosceptic MPs by the end of October.

Both men vying to be the next prime minster, Johnson and Jeremy Hunt, have said they would back a no-deal Brexit departure from the EU, if a new withdrawal agreement with Brussels couldn't be reached.

Johnson said there was a new feeling of "common sense breaking out" among members of Parliament in favor of passing a deal. He played down the idea that he would prorogue – or suspend – Parliament in order to secure a departure on Oct 31, but did not entirely rule it out.

"I'm not attracted to archaic devices like proroguing," he said.

Meanwhile, Britain's leading tax and spending think tank has said that Hunt's promise to reduce corporation tax to the lowest rates in the advanced world would only "exacerbate" the UK's financial problems.

The Institute for Fiscal Studies warned that his plans would mean a continuation of the unpopular Tory policy of austerity and would cost 13 billion pounds ($16.5 billion) a year.

The foreign secretary, Hunt, has proposed reducing the rate of corporation tax paid by companies to 12.5 percent, matching the rate in Ireland among the lowest of any major economy.

The institute disputed the claims of some low-tax advocates that the policy would pay for itself by driving up company investment and encouraging overseas companies to locate in Britain.

Paul Johnson, director of the IFS, said cutting corporation tax, and another promise made by Hunt to raise defense spending, would "leave no scope to relieve the pressure on other areas of public spending without tax rises, or a fiscal stance which risked putting debt on a rising path".

Both Conservative leadership contenders announced this week they will bring down the barriers to talented overseas workers.

Johnson said he would make the UK "much more open" to high-skilled migrants such as scientists, while Hunt promised to scrap the immigration target of keeping net migration below 100,000, which has never been met.

Hunt said: "We're not going to be a country that changes from Little Britain into Little England and pulls down the shutters and says 'Foreigners not welcome'."