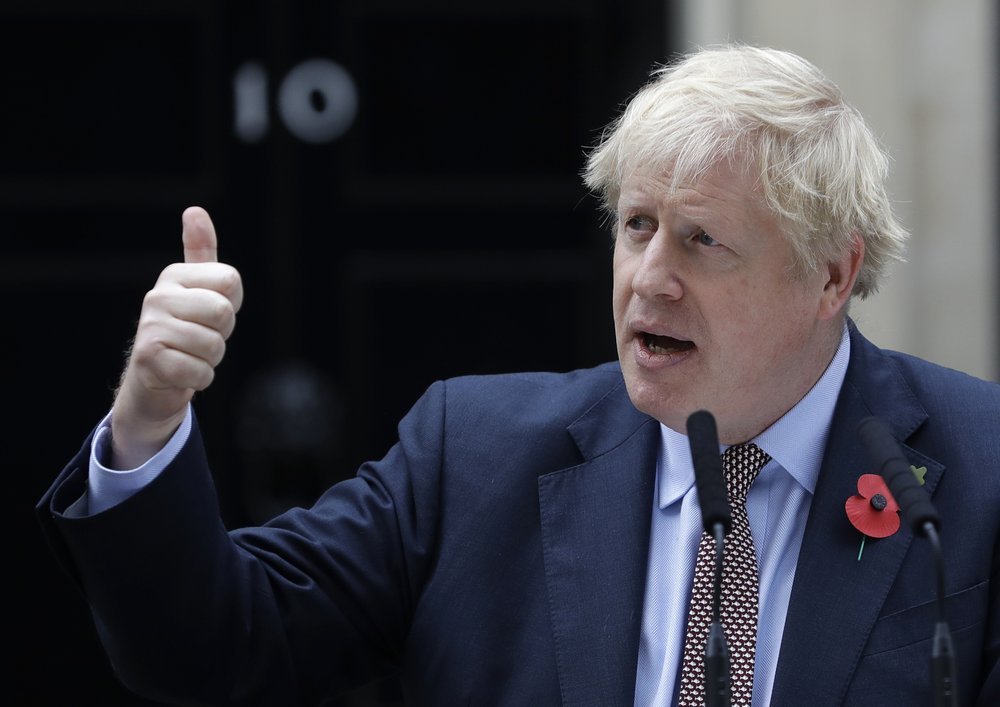 Prime Minister Boris Johnson told British voters on Wednesday that they have to back his Conservatives if they want an end to Brexit delays, as he tried to shake off a rocky start to the governing party’s election campaign.

Speaking outside his No. 10 Downing St. office on the first official day of Britain’s five-week campaign, Johnson said the political impasse over Britain’s departure from the European Union made him want to “chew my own tie in frustration.”

“I don’t want an early election, and no one much wants to have an election in December, but we have got to the stage where we have no choice,” he said.

Johnson, trying to set the stage for a people-versus-Parliament campaign, said lawmakers were “refusing time and again to deliver Brexit and honor the result of the referendum.”

In fact, lawmakers approved Johnson’s EU divorce deal in principle last month but asked for more time to scrutinize it. Johnson then withdrew the bill and pushed for an early election instead.

All 650 seats in the House of Commons are up for grabs in the Dec. 12 election, which is coming more than two years early. Some 46 million British voters are eligible to take part in the country’s first December election in 96 years.

Johnson urged voters to deliver a Conservative majority so Britain could “put uncertainty behind us.” With that support, Johnson vowed he would get Parliament to ratify his Brexit deal and the country would leave the EU as scheduled on Jan. 31.

Brexit was supposed to happen on Oct. 31, but with Britain’s politicians deadlocked, the bloc granted the UK a three-month delay.

While unofficial campaigning has been ramping up for weeks, the campaign formally began when Parliament was dissolved Wednesday. Johnson went to Buckingham Palace to notify Queen Elizabeth II of that and was heading off to his first campaign rally, an evening event in central England.

The Conservative campaign has had a bumpy start. Just minutes before Johnson spoke Wednesday, Cabinet Minister Alun Cairns resigned over allegations about a former aide’s role in a rape trial.

Cairns said he was quitting as Welsh secretary because of “speculation” surrounding the “very sensitive matter,” which is under investigation. He said he was confident he would be cleared of wrongdoing.

Cairns denies allegations that he knew his former staffer Ross England made claims about a victim’s sexual history when he was a witness in a 2018 rape trial. That is not allowed, and the trial collapsed. The judge accused England of deliberately sabotaging the trial. Cairns later endorsed England as a candidate for an upcoming Welsh Assembly election.

On Tuesday, another Conservative, outgoing House of Commons leader Jacob Rees-Mogg, was forced to apologize for suggesting that the victims of a 2017 London apartment block inferno that killed 72 people lacked a common sense for following fire department advice to wait in their apartments for help.

The comments drew sharp rebukes from opposition politicians — and from rap star Stormzy, who urged the Conservative lawmaker to resign and tweeted: “These politicians are actual aliens.”

The Conservatives were also criticized for posting a doctored video of a senior Labour figure on Twitter that appeared to show him failing to answer a question, when in fact he did. Conservative Party chair James Cleverly claimed Wednesday the ad was just “a lighthearted satirical video.”

In another over-the-top political insult, Johnson used a column in the Daily Telegraph to accuse the Labour Party under Corbyn of attacking the rich “with relish and vindictiveness not seen since Stalin persecuted the kulaks,” the wealthier peasants targeted by the Soviet regime in the 1930s.

In his Downing Street speech, Johnson also claimed inaccurately that Corbyn had “sided with Putin” after a former Russian spy and his daughter were attacked with a nerve agent in the English city of Salisbury.

Corbyn initially asked for “incontrovertible evidence” that Moscow was behind the 2018 attack, as Britain’s Conservative government had insisted. He later said he believed Russia was responsible for the poisoning.

Other parties in the race include the Liberal Democrats, who want to cancel Brexit; the Scottish National Party, which opposes Brexit and wants Scotland to leave the UK; and the Brexit Party, which says Britain should leave the bloc without a deal.

The Labour Party wants to shift the election debate away from Brexit and onto domestic issues such as health care, the environment, and social welfare, saying it will reverse Britain’s increasing social inequality.

“I don’t do personal attacks,” Corbyn told supporters in Telford, central England. He said, if elected, he would be “a very different kind of prime minister.”

“I was not born to rule,” Corbyn said, contrasting himself with the affluent, Oxford University-educated Johnson. “I don’t pursue the kind of politics that thinks it’s all a game, a parlor game, a debating society game.”