Prime Minister Boris Johnson on Tuesday urged foreign investors to buy into post-Brexit Britain, as he seeks to power the country's future prosperity on renewable energy. 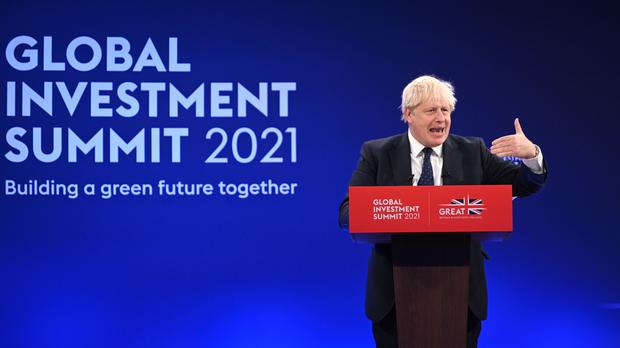 The UK leader kicked off a Global Investment Summit in London by announcing a £400 million ($552 million, 473 million euros) partnership with the Bill Gates Foundation to invest in emerging green technologies.

Johnson, who has outlined plans for the UK to reach net-zero carbon emissions by 2050, is hoping to burnish his green credentials before hosting world leaders at a critical UN climate change gathering in Glasgow next month.

He also wants to boost investment to grow Britain's economy as it grapples with the fall-out from the coronavirus pandemic and Brexit, which have combined to strain the logistics sector, labour market and other areas.

In his sales pitch, Johnson promised government backing for private investment in sustainable projects, promising Britain was now "moving in an exciting new direction with a green, industrial revolution, with new regulatory freedoms".

But some government plans to cut carbon emissions have come under fire for not going far enough.

Homeowners in England and Wales will be offered subsidies of £5,000 from next year as part of a £450 million scheme to help them replace old gas boilers with low-carbon heat pumps.

But experts pointed out that the grants will fund just 90,000 of the devices, and a better alternative would be to reduce energy demand by improving home insulation.

Activists from the campaign group Insulate Britain have sought to highlight that issue by blocking motorways and main roads in recent weeks.