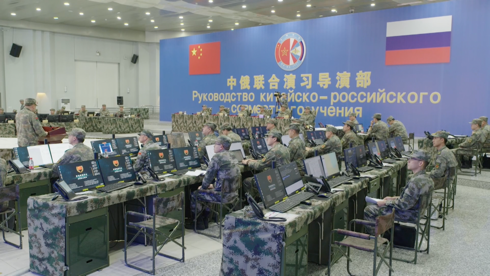 This is the drill on jointly evaluating the situation at the exercise site, understanding military tasks, and coordinating missions before the combat exercise in the next two days.

For the drill, the China-Russia Joint Command has established a Russian sub-command center for the first time in such joint exercise and is using a special edition bilingual command information system.

It links all sub-command centers to the command posts in all battle groups. If necessary, it can go directly to the solo terminals of both militaries, sharing situation information and command data.

"It has unified tasks to lock down targets, mobilize forces and coordinate supplies and to make sure to form a firm and single resolve and a plan for the joint operation," Huang said.

Both militaries used Gantt chart (a type of bar chart that illustrates a project schedule) and mind map in the command planning drill on Tuesday and Wednesday.

This greatly increases the efficiency of drill and the capability of the joint forces and helps both sides have in-depth communication, according to the joint command.

ZAPAD/INTERACTION-2021 kicked off on Monday in Qingtongxia with more than 10,000 Chinese and Russian military personnel participating. It will last until Friday.