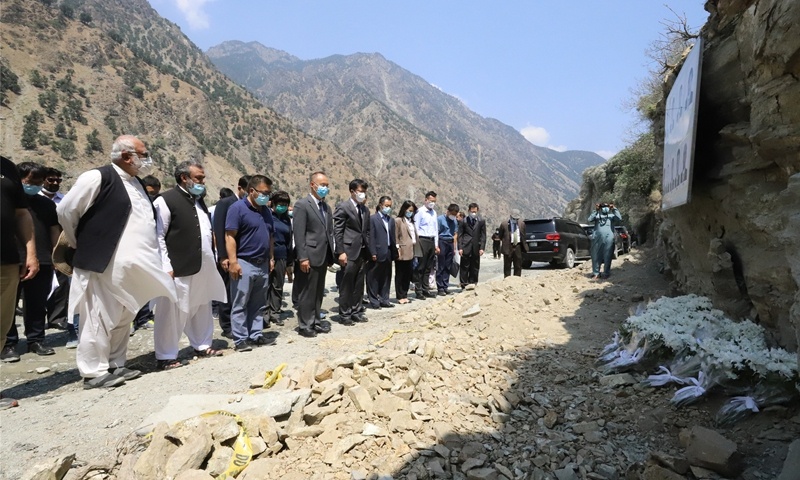 The Chinese joint work team to Pakistan, along with staff from the Chinese embassy expressed their condolences to Chinese nationals who were killed in a bus blast in Pakistan this week. The Chinese official said that the strong friendship between China and Pakistan won't be disrupted, and urged Pakistan to double down security measures to protect Chinese nationals in the country.

Pictures of the victims and white flowers were presented at the scene in Khyber Pakhtunkhwa province, where a deadly bus blast claimed lives of nine Chinese. Wu Wei, deputy director-general of the Department of External Security Affairs of China's Ministry of Foreign Affairs who leads the joint work team, along with Nong Rong, the Chinese ambassador to Pakistan, paid condolences on Saturday.

Wu said as constructors of a new generation of friendship between China and Pakistan, their "blood and sweat" won't be forgotten by history and people of the two countries.

After the condolences, they went to China-invested Dasu hydropower project, where all the victims used to work.

Wu also said that the joint work team has asked Pakistan to tighten up their security measures, to ensure safety of all Chinese employees in the country.

Criminal investigation group from the joint team is working together with Pakistani authorities.

Zhao Kezhi, Chinese Minister of Public Security, said in a phone call with the Interior Minister of Pakistan on Saturday that his ministry has sent criminal investigation experts to Pakistan to assist in the investigation into the terrorist attack that targeted Chinese nationals.

Zhao said the Chinese government attaches great importance to the attack and hopes China and Pakistan can work together to find out the truth, solve the case as soon as possible, locate the real perpetrators and severely punish the organizers behind the attack.