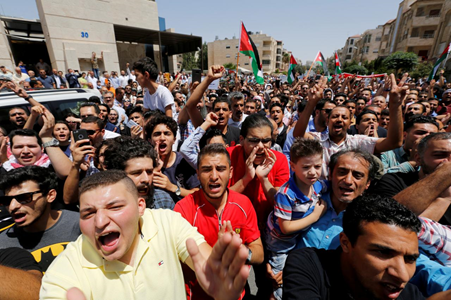 Jordan's Foreign Minister Ayman Safadi made the remarks at a meeting with UNHCR High Commissioner Filippo Grandi, where he said it was essential for donor countries to continue providing support to Jordan as it is shouldering tremendous burden.

He added that there were around 1.3 million Syrian refugees in Jordan, saying it was important to provide them with their daily needs in various areas.

He added that Jordan exceeded its capabilities and reaches a level of saturation in this regard.

The UNHCR official voiced appreciation to Jordan's efforts and support to the Syrian refugee, adding that the agency will continue to support them.

Also Sunday, Minister of Interior Ghaleb Zu'bi met with the UN official and discussed means to overcome challenges and to help Jordan absorb the burden.

The minister called for increased aid to Jordan in this regard, highlighting challenges Jordan is facing in various sectors due to the exodus of large numbers of refugees.