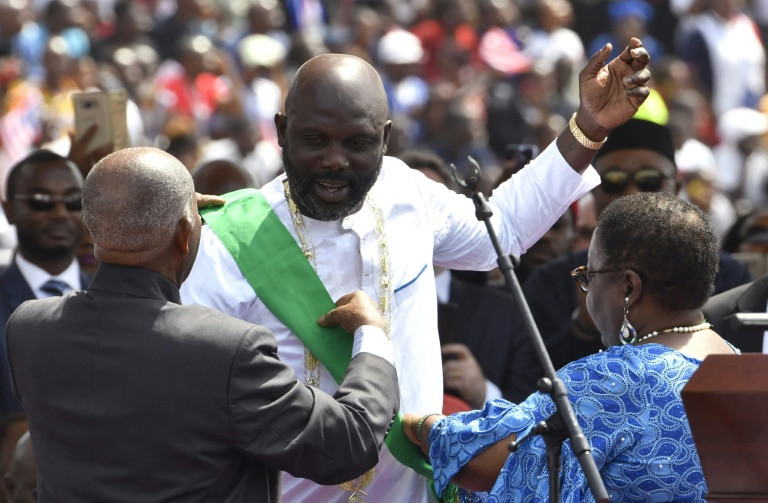 Weah took his oath of office before an escstatic crowd at a stadium near Monrovia. Photo: AFP

To the cheers of a crowd fired by his promise to bring them jobs and prosperity, former football star George Weah was sworn in as president of Liberia on Monday, completing the country's first transition between democratically-elected leaders in three generations.

Weah, 51, takes over from Nobel laureate Ellen Johnson Sirleaf, who over 12 years steered the country away from the trauma of a civil war but failed to ease dire poverty.

"I have spent many years of my life in stadiums, but today is a feeling like no other," Weah said, as he thanked Sirleaf for "laying the foundations on which we can now stand in peace."

Weah played for a string of top-flight European teams in the 1990s and was crowned the world's best player by FIFA and won the coveted Ballon d'Or prize, the only African to have achieved this.

Dressed in a white tunic and green sash, he was sworn in by Liberia's top judge Francis Korkpor at a packed stadium near the capital, Monrovia, where thousands crammed onto benches to cheer their new leader.

The presidents of several west African nations, along with friends and fellow African football stars including Cameroonian legend Samuel Eto'o, watched as he took the historic oath of office on a bible held by his wife, Clar.

His first priorities, he said, would be to launch a national debate on the fair sharing of resources and root out graft in public institutions.

"Together we owe our citizens clarity on fundamental issues such as the land beneath their feet, freedom of speech and how national resources and responsibilities are going to be shared," he said.

"It is time to be honest with our people. Though corruption is a habit among our people, we must end it," said Weah, declaring he had an "overwhelming mandate" to do so.

But he urged the public to pull together for the tasks that lay ahead, with the wounds of the past only now beginning to heal.

"We have arrived here on the blood, sweat and tears and suffering of so many of our citizens, too many of whom died long before real equality," he noted, referring to the quarter of a million people killed in Liberia's 1989-2003 civil war.

Weah's election is a watershed moment for the country's poor, many of whom view his ascent from Monrovia's slums to the nation's highest office with a feeling close to reverence.

"He came from nowhere but today he became a president. It means a lot for me and I'm so happy to witness this in my own country," said Suah Collins, selling drinks at the stadium.

After losing his first run at the presidency to Sirleaf in 2005, Weah has spent a dozen years attempting to gain political credibility to match his popularity, becoming a senator in 2014.

He now begins his task with severe restraints on spending and outsized expectations from the population, as well as a depressed market for the country's main exports of rubber and iron ore.

More than 60 percent of its 4.6-million citizens are under 25, and many voted for Weah in the belief he would quickly boost employment. Liberia ranks 177th on the 188 countries in the UN's Human Development Index.

Sirleaf's last act in office was to sign into law the abolition of female genital mutilation and stronger protection for survivors of domestic abuse -- her final legacy to Liberian women enduring endemic levels of abuse and rape.

The last time Liberia had a transition of power by democratically-elected leaders was in 1944, when William Tubman was elected.

He died in office in 1971. Since then, no living president has handed power to another after a democratic vote.

Weah has had less than a month to prepare for government, rather than the three months initially scheduled, after a legal challenge delayed his election.

Analysts, while hailing Liberia's democratic feat, were also mindful of the rocky road ahead, not least the likely resistance to reform by the Liberia's establishment.

"He will need to manage expectations carefully: this window of optimism will be short," Elizabeth Donnelly, a research fellow at the London think tank, Chatham House, told AFP.

"Weah has already stated that he will seek more investment into the private sector -- he understands that Liberia has a large youth population, whose expectations and needs he must satisfy.

"But the reality is there is also a political establishment whose expectations he will also try to meet," she added.