The US Justice Department can't replace nine lawyers so late in the dispute over whether to add a citizenship question to the 2020 census without explaining why they are doing so, a judge said Tuesday. 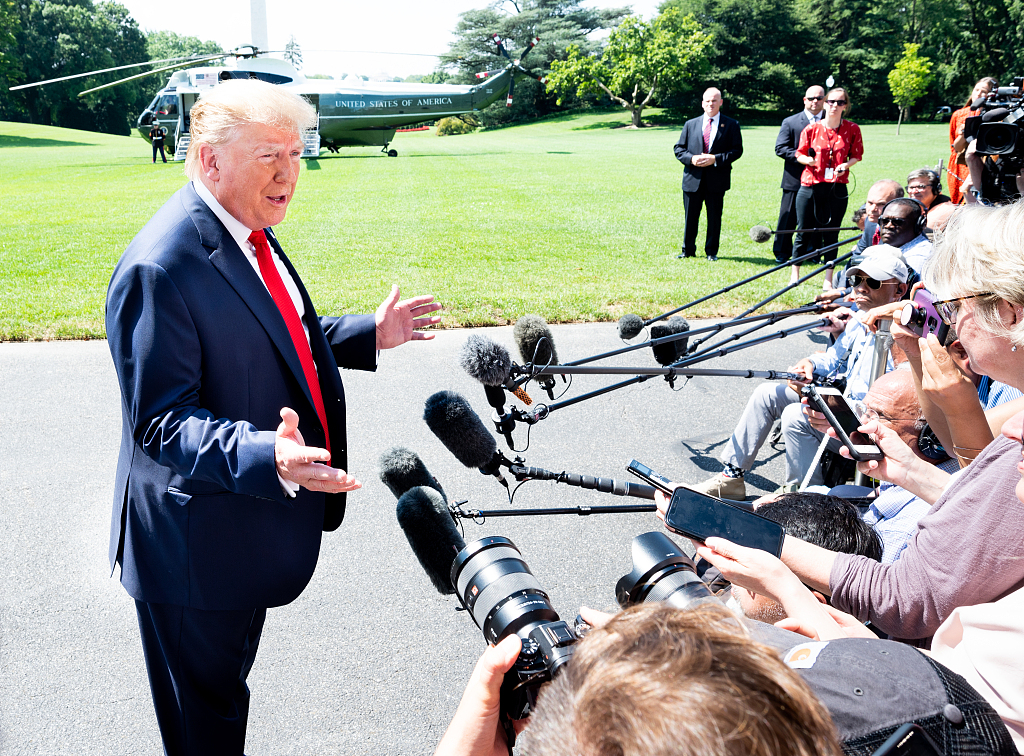 US President Donald Trump near the South Lawn of the White House speaking to journalists as he's about to leave for the weekend, in Washington, DC. (Photo: VCG)

US District Judge Jesse M. Furman, who earlier this year ruled against adding the citizenship question, put the brakes on the government's plans a day after he was given a three-paragraph notification by the Justice Department along with a prediction that the replacement of lawyers won't "cause any disruption in this matter."

"Defendants provide no reasons, let alone 'satisfactory reasons,' for the substitution of counsel," Furman wrote, noting that the most immediate deadline for government lawyers to submit written arguments in the case is only three days away.

The judge said local rules for federal courts in New York City require that any attorney requesting to leave a case provide satisfactory reasons for withdrawing. The judge must then decide what impact a lawyer's withdrawal will have on the timing of court proceedings.

He called the Justice Department's request "patently deficient," except for two lawyers who have left the department or the civil division which is handling the case.

The new team came about after a top Justice Department civil attorney who was leading the litigation effort told Attorney General William Barr that multiple people on the team preferred not to continue, Barr told The Associated Press on Monday.

The attorney who was leading the team, James Burnham, "indicated it was a logical breaking point since a new decision would be made and the issue going forward would hopefully be separate from the historical debates," Barr said.

Furman's refusal came in a case that has proceeded on an unusual legal path since numerous states and municipalities across the country challenged the government's announcement early last year that it intended to add the citizenship question to the census for the first time since 1950.

Opponents of the question say it will depress participation by immigrants, lowering the population count in states that tend to vote Democratic and decreasing government funds to those areas because funding levels are based on population counts.

At one point, the Justice Department succeeded in getting the Supreme Court to block plans to depose Commerce Secretary Wilbur Ross. Nearly two weeks ago, the Supreme Court temporarily blocked the plans to add the census question, saying the administration's justification for adding the question "seems to have been contrived."

Afterward, the Commerce Department's Census Bureau began printing census questionnaires without the question and the Department of Justice signaled it would not attempt to continue the legal fight.

It reversed itself after President Donald Trump promised to keep trying to add the question.

The Justice Department then notified judges in three similar legal challenges that it planned to find a new legal path to adding the question to the census.

Furman said the urgency to resolve legal claims and the need for efficient judicial proceedings was an important consideration in rejecting a replacement of lawyers.

He said the Justice Department had insisted that the speedy resolution of lawsuits against adding the question was "a matter of great private and public importance."

"If anything, that urgency — and the need for efficient judicial proceedings — has only grown since that time," Furman said.

Furman said the government could re-submit its request to replace attorneys only with a sworn statement by each lawyer explaining satisfactory reasons to withdraw so late. He said he'll require new attorneys to promise personnel changes will not slow the case.