A federal judge Tuesday abruptly postponed the sentencing of President Donald Trump's first national security adviser, Michael Flynn, declaring himself disgusted and disdainful of Flynn's crime of lying to the FBI and raising the unexpected prospect of sending the retired Army lieutenant general to prison. 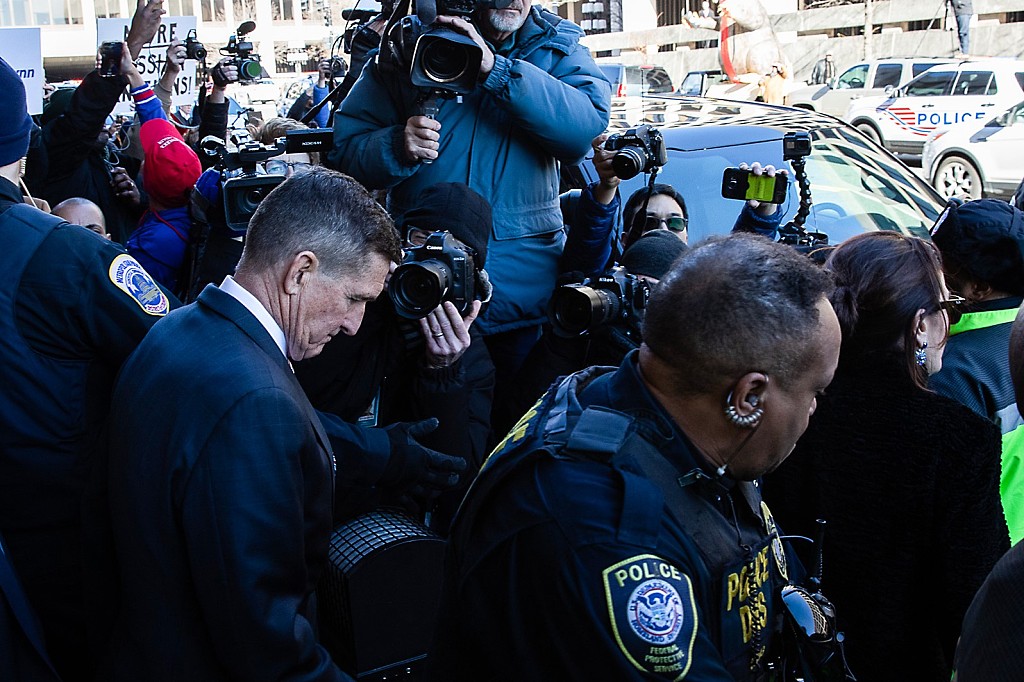 Lawyers for Flynn, who admitted lying to the FBI about his Russian contacts, requested the delay during the stunning hearing in which U.S. District Judge Emmet Sullivan told the former Trump aide in a blistering rebuke that "arguably you sold your country out."

"I can't make any guarantees, but I'm not hiding my disgust, my disdain for this criminal offense," Sullivan said.

The postponement gives Flynn a chance to continue cooperating with the government in hopes of staving off prison and proving his value as a witness, including in a foreign lobbying prosecution brought this week. The possibility of prison had seemed remote for Flynn, who was smiling and upbeat as he entered the courtroom, since prosecutors had praised his extensive cooperation and didn't recommend any time behind bars.

But the judge's upbraiding suggested otherwise and made clear that even defendants like Flynn who have cooperated in special counsel Robert Mueller's Russia investigation may nonetheless be shadowed by the crimes that brought them into court in the first place. The hearing upset what had been a carefully crafted agreement and pushed months into the future a resolution of one of Mueller's signature prosecutions.

"This is a very serious offense. A high-ranking senior official of the government making false statements to the Federal Bureau of Investigation while on the physical premises of the White House," Sullivan said.

He later softened his tone, apologizing for suggesting that Flynn had worked as a foreign agent, "undermining everything this flag over here stands for" while in the White House when that other work had actually already ended. He also backpedaled on an earlier question on whether Flynn's transgressions amounted to treason, saying he didn't mean to suggest they did.

Flynn was to have been the first White House official sentenced in Mueller's ongoing investigation into possible coordination between the Trump presidential campaign and Russia.

The hearing, though incomplete, marked a remarkable fall after a three-decade military career that included Flynn's tours in Iraq and Afghanistan and oversight of the Defense Intelligence Agency during the Obama administration. Though he served only briefly in Trump's White House, he campaigned vigorously before the election and attracted attention for memorably leading a Republican National Convention crowd in a "Lock Her Up" chant about Hillary Clinton.

It all comes amid escalating legal peril for Trump, who was implicated by federal prosecutors in New York this month in hush-money payments involving his former lawyer to cover up extramarital affairs. Nearly a half-dozen former aides and advisers have pleaded guilty or agreed to cooperate with prosecutors. Some, like Flynn, have been tripped up by concealing Russian contacts.

Flynn's help in the probes, including 19 meetings with investigators, has been especially notable. Yet he's nonetheless enjoyed Trump's continued sympathy, thanks in part to a sentencing memo last week that tapped into the president's suspicion of law enforcement and took aim at the FBI's conduct during the investigation.

Trump tweeted "good luck" to his first national security adviser hours before the sentencing and said: "Will be interesting to see what he has to say, despite tremendous pressure being put on him, about Russian Collusion in our great and, obviously, highly successful political campaign. There was no Collusion!"

At the White House afterward, press secretary Sarah Huckabee Sanders was asked if the administration had changed its stance on Flynn or the FBI after his admissions and guilty plea.

"Maybe he did do those things, but it doesn't have anything to do with the president," she said. "It's perfectly acceptable for the president to make a positive comment about somebody while we wait to see what the court's determination is."

Sanders repeated her allegation that the FBI "ambushed" Flynn in an interview in which he lied. Of Trump's earlier criticism of the agency, she said, "We don't have any reason to want to walk that back."

During those conversations, Flynn urged against a strong Russian response to Obama administration sanctions for Russian election interference and also encouraged Russia's opposition to a U.N. resolution on Israeli settlements.

But when FBI agents approached him in the White House on Jan. 24, 2017, Flynn lied about those conversations, prosecutors said.

Flynn has never said why he lied, but Sullivan nonetheless castigated him for a deception that was then parroted by other senior administration officials.

The tone of Tuesday's hearing startled Flynn supporters who hoped his lawyers' arguments about the FBI's conduct — they suggested he was discouraged from having a lawyer present and wasn't informed it was a crime to lie — to resonate more than it did with Sullivan, who a decade ago tossed out the prosecution of a U.S. senator over government misconduct.

But while Sullivan tested those arguments, he was ultimately unmoved and Flynn mostly walked them back. He acknowledged that he indeed knew that lying to the FBI was a crime. Neither he nor his lawyers disputed that he had lied to agents.

Flynn attorney Robert Kelner asked Sullivan not to penalize Flynn for the sentencing memo arguments, saying they were mostly intended to differentiate Flynn from other defendants in Mueller's investigation who'd received prison sentences for lying. Though Sullivan said none of the other defendants was a White House official, Kelner suggested none had been as cooperative.

"He made the decision publicly and clearly and completely and utterly to cooperate with this investigation, knowing that because of his high rank, that was going to send a signal to every other potential cooperator and witness in this investigation," he added.

After a prosecutor raised the prospect of Flynn's continued cooperation with other investigations in the future, Sullivan warned Flynn that he might not get the full credit for his assistance to the government if he were sentenced as scheduled.

Sullivan gave a visibly shaken Flynn a chance to discuss a delay of the hearing with his lawyers. The court briefly recessed.

When they returned, Kelner requested a postponement to allow for Flynn to keep cooperating. Kelner said he expected Flynn would have to testify in a related trial in Virginia involving Flynn's former business associates, and the defense wanted to "eke out the last modicum of cooperation" so he could get credit.

The judge set a new hearing date for March. Flynn left the courthouse hand-in-hand with his wife, climbing into a large SUV as protesters heckled and supporters chanted "USA!"