The US allegations against Meng Wanzhou are unclear, a Canadian judge said during the Huawei executive's extradition hearing. 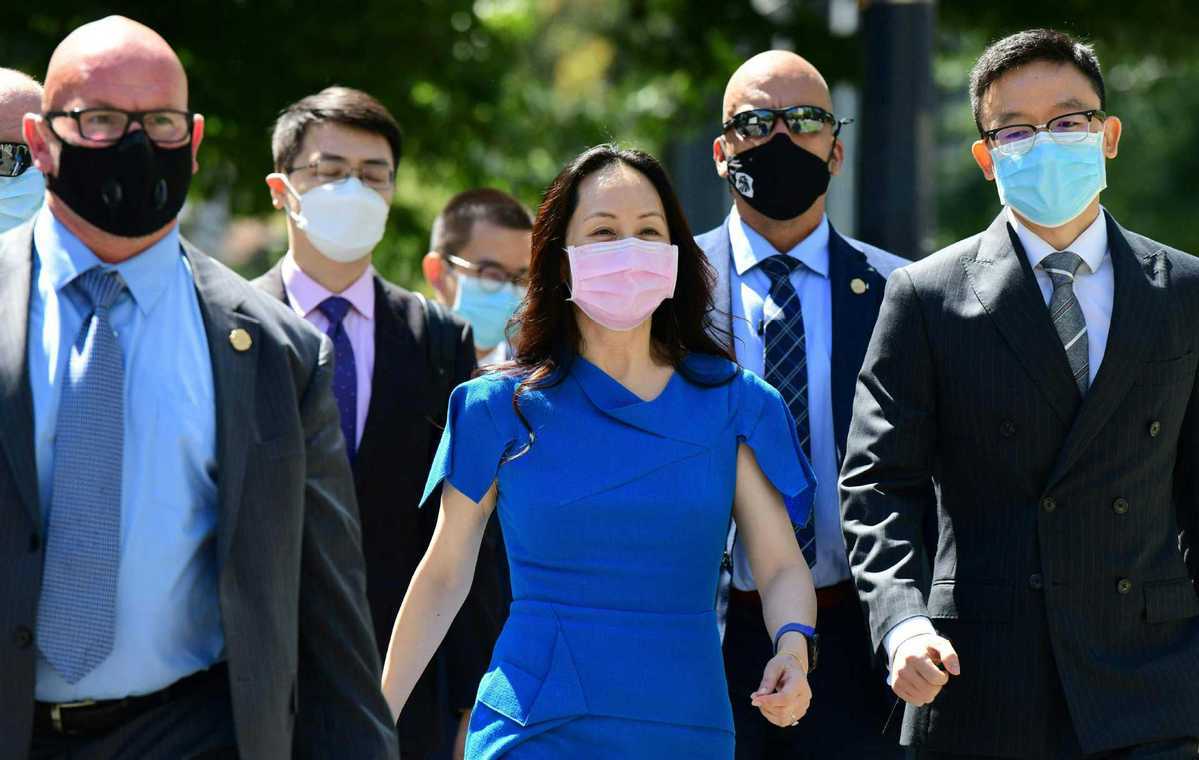 Huawei chief financial officer Meng Wanzhou arrives at British Columbia Supreme Court with her security detail for the afternoon session of her extradition hearing in Vancouver, Canada on Aug 4, 2021. [Photo/Agencies]

Asking how the US addressed the allegations in the record of the case (ROC) supplied to Canadian authorities, Associate Chief Justice Heather Holmes of the British Columbia Supreme Court — who will decide whether or not Meng can be extradited to the US — said Wednesday that it was difficult to understand the allegations.

Holmes questioned Robert Frater, lawyer for the Canadian attorney general, whether the US had explained the essence of the crime it alleged Meng had committed — and in particular, its connection to sanctions against Iran.

"I've had great difficulty understanding what is about the commercial dealings of Huawei on one hand and Skycom on the other that is said to have engaged US sanctions," said Holmes. "What I don't understand is whether the simple fact of dealing with the government in Iran would be viewed as offside sanctions."

"Can you show me that in the ROC?" the judge asked.

The judge said she has been troubled by the issue.

"What I'm trying to get at is how does the ROC make all of that clear? That certain things engage sanctions and other things don't. Because it's only with that background that one can assess what's said in the PowerPoint as to whether it was deceptive," said Holmes.

Meng, 49, the chief financial officer of Huawei Technologies Co Ltd, was arrested by Canadian authorities at the request of the US at the Vancouver International Airport on Dec 1, 2018. She is accused of misrepresenting the Chinese telecom company's relationship with Skycom in a PowerPoint presentation to HSBC in 2013 and putting the bank at risk of violating US sanctions against Iran. Meng and Huawei have repeatedly denied the accusations.

The meeting between Meng and HSBC was arranged after Reuters published articles suggesting Skycom, which it said had "close ties" with Huawei, was violating sanctions. Holmes expressed "skepticism" several times that HSBC was truly put at risk by Meng's presentation after it received a clear warning of sanctions violations in the Reuters reports, according to The Globe and Mail.

The judge also asked about possible contradictions in Frater's summary of the case against Meng, that she told HSBC there was no risk of sanctions violations from Huawei or Skycom while failing to disclose the true relationship between the two companies.

"There are three alleged false messages. I wonder whether two of them are not inconsistent with each other," said the judge. "As I understand your theory, a false assurance that the bank had nothing to worry about as far as sanctions went (was) because they could assure Skycom was in compliance.

"Doesn't that run counter to the theory that she falsely misrepresented that Huawei didn't control Skycom? How would she be able to give that assurance of compliance in a convincing way unless Huawei was in control of Skycom?" asked Holmes.

"We see no conflict between that and the attempt to distance Skycom from Huawei. It's all about conveying a message of no risk," replied Frater.

"I suppose I'm wondering whether it's reasonable to assume that an international bank would rely on an assurance from one person about compliance by other companies not under Huawei's direct control," the judge continued.

"It's clear Meng said we do business in Iran. And it's clear HSBC continues to do business with Huawei. That's fundamental. But is Meng the one reasonably to advise HSBC on dollar-clearing?" Holmes asked.

"No, but she has to convey a message and information they can use to make the determination. She said they are complying with all sanctions, and that Skycom is compliant," Frater replied.

Meng's lawyers have previously argued that the ROC omitted material information and contained misstatements. In particular, on the distinction between junior and senior HSBC employees, the Crown has frequently shifted its theory as new HSBC evidence has been disclosed, the defense said.