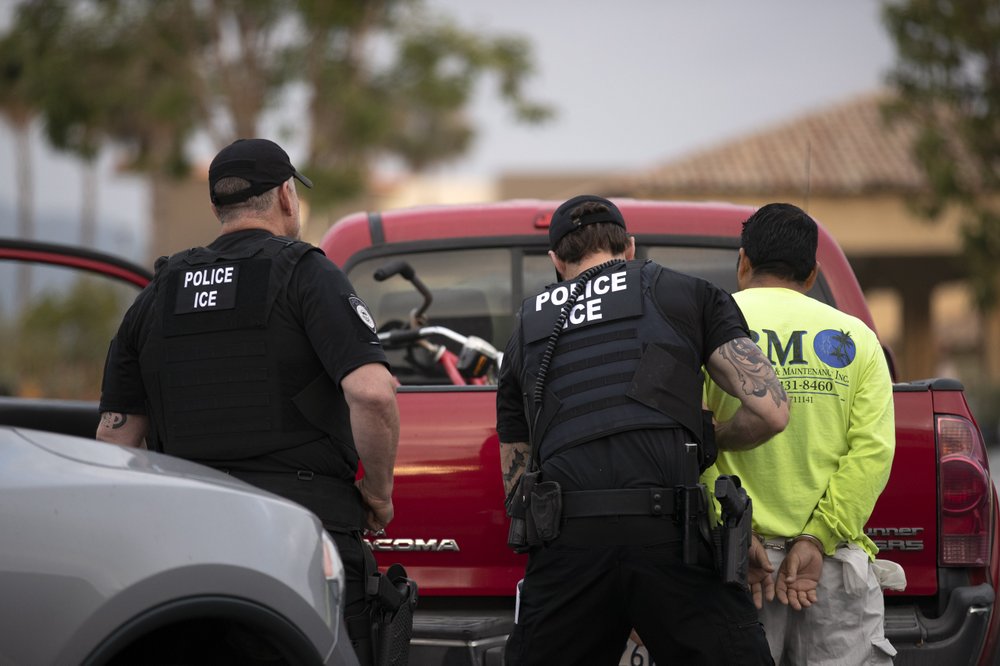 In this July 8, 2019, photo, a US Immigration and Customs Enforcement (ICE) officers detain a man during an operation in Escondido, Calif. (Photo: AP)

A federal judge has prohibited US immigration authorities from relying on databases deemed faulty to ask law enforcement agencies to hold people in custody, a setback for the Trump administration that threatens to hamper how it carries out arrests.

The ruling, issued Wednesday, applies even if ICE moves the operation from Laguna Niguel, south of Los Angeles.

US District Judge Andre Birotte Jr. in Los Angeles said the databases are unreliable for people who are not already deported or in removal proceedings before an immigration judge. The best way to confirm legal status is through an interview, immigration records or other documents, he wrote.

During Barack Obama’s presidency, immigration authorities dramatically increased requests to prisons and jails to hold people an additional 48 hours if they are suspected of being in the country illegally. The practice, which has continued under President Donald Trump, often gives immigration authorities time to arrest people before they are released.

The White House issued a statement that said an unnamed judge in California issued “a legally groundless and sweeping injunction that — if not immediately lifted —will guarantee the release of innumerable criminal illegal aliens into our communities putting citizens at dire risk.”

“This ruling undermines the pillars of immigration enforcement and blocks traditional and vital law enforcement cooperation that has occurred for decades,” the statement read.

ICE said it is reviewing the decision to determine its impact and decide on any next steps.

The American Civil Liberties Union of Southern California filed the case on behalf of Gerardo Gonzalez, a US citizen who was subject to a hold request in 2012 when in custody of the Los Angeles County Sheriff’s Department.

From May 2015 to February 2016, 771, or 6%, of 12,797 requests that ICE issued were either for US citizens or people who were not subject to deportation, according to records introduced at trial last year .

The judge ruled in September that the databases ICE uses “often contain incomplete data, significant errors, or were not designed to provide information that would be used to determine a person’s removability.”

The decision comes as Trump ramps up criticism of state and local governments, including California, that limit cooperation with immigration authorities, often referred to as “sanctuary” jurisdictions.

Earlier this week, the administration said New York state residents will be cut off from “trusted traveler” programs that speed their re-entry into the country, blaming a new state law that prohibits immigration agents from accessing motor vehicle records.

Tens of thousands of New Yorkers will face the inconvenience of slower re-entry because of a law that administration officials say puts public safety at risk. New York state officials and other administration critics dismissed the Department of Homeland Security’s action as a political stunt.