A Scottish judge was to decide Friday whether to issue an interim ruling on stopping the British parliament being suspended in the final weeks before Brexit. 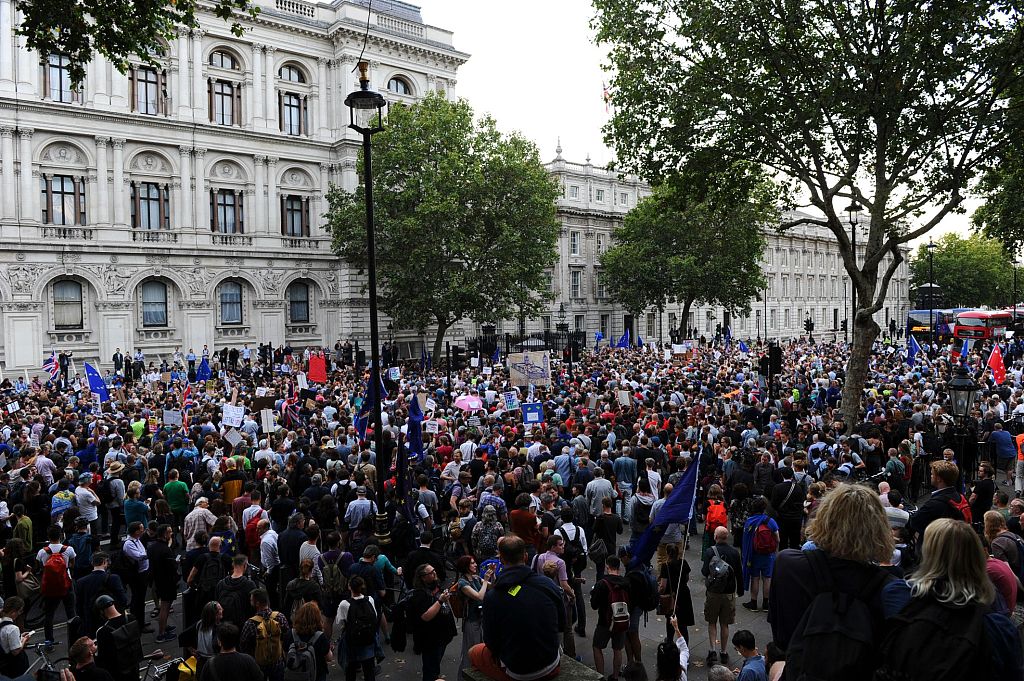 Judge Raymond Doherty on Thursday heard a bid for an interim interdict -- the Scottish legal equivalent of an injunction -- that would halt Prime Minister Boris Johnson's move to suspend parliament between mid-September and October 14.

Queen Elizabeth II, the head of state who must follow the advice of her ministers, has already given the go-ahead.

A group of 75 parliamentarians are seeking a temporary injunction from Doherty pending a full hearing on September 6.

The judge will start giving his decision at 10:00am (0900 GMT) at the Court of Session in Edinburgh, Scotland's highest civil court.

England and Wales, Scotland and Northern Ireland have their own separate legal systems within the United Kingdom.

Legal bids to halt Johnson's move have also been launched in London and Belfast.

The prime minister insists Britain must leave the European Union on time, with or without a divorce deal -- and the move limits his opponents' room for manoeuvre.

But the move ahead of the October 31 Brexit date sent shockwaves through British politics, triggering a furious outcry from pro-Europeans and MPs opposed to a no-deal exit.

Wrong-footed, Johnson's opponents labelled the suspension of parliament a "coup" and a "constitutional outrage".

"We've had one of the longest parliamentary sittings in almost 400 years. We've been talking about almost nothing but Brexit," he told reporters at a summit in Helsinki.

"We're going to get a chance to scrutinise all aspects of Brexit between now and the end of October."

He said around four days of parliamentary time would be lost.

"The idea that this is some kind of constitutional outrage is nonsense."

Britain's Brexit negotiators are to meet their EU counterparts twice a week throughout September in a bid to reach a new divorce agreement.

Johnson said he wants to "step up the tempo" in talks with the European Union to strike a new Brexit deal.

"While I have been encouraged with my discussions with EU leaders over recent weeks that there is a willingness to talk about alternatives to the anti-democratic backstop, it is now time for both sides to step up the tempo," he said.

There are growing concerns among some major players in the EU that Britain will not be able to come up with realistic alternatives to the backstop in time.

A spokesperson for the European Commission said they were willing to work "24/7 throughout this long process".

"We expect the UK to come forward with concrete proposals as President (Jean-Claude) Juncker made clear to Prime Minister Johnson earlier this week."

The backstop is included in a divorce deal the EU agreed with Johnson's predecessor, Theresa May, which parliament has rejected three times.

- Protests in the streets -

Beyond the courts, Johnson's opponents are planning all manner of moves to stop him in his tracks.

Shami Chakrabarti, Labour's chief legal advisor, warned on BBC radio: "We will use any means necessary to prevent this undemocratic behaviour -- that includes people taking to the streets."

Protests are planned Saturday in several cities, with some organisers calling for roads and bridges to be occupied.

The leaders of the six opposition parties in parliament said they believed a majority of MPs were against Johnson's move.

"We demand that the prime minister reverses this decision immediately or allows MPs to vote on whether there should be one," they said of the suspension.

"The prime minister is shutting down parliament with the sole aim of stopping MPs from avoiding a no-deal Brexit."

Labour opposition leader Jeremy Corbyn said he would try to start a parliamentary process that would allow Johnson's opponents to legislate to prevent Britain leaving the EU without a deal and to stop the suspension of business.

Corbyn is also mulling a no-confidence vote in Johnson's Conservative government, which commands a fragile 320 to 319 majority.