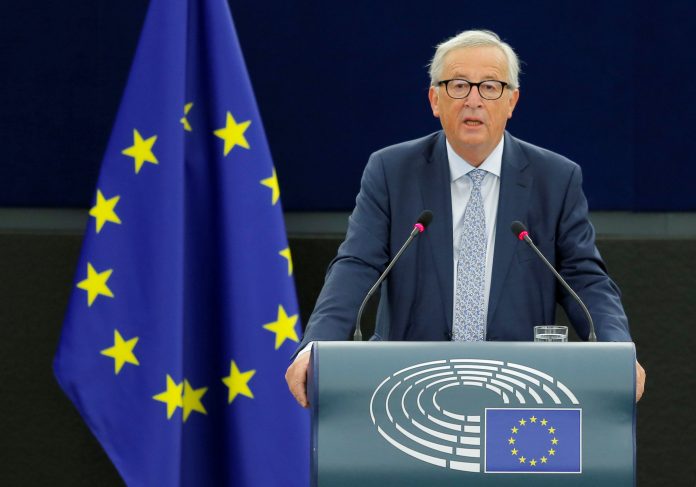 European Commission President Jean-Claude Juncker delivers a speech during a debate on The State of the European Union at the European Parliament in Strasbourg, France, September 12, 2018. (File Photo: CGTN)

BUCHAREST, Jan. 11 (Xinhua) -- Romania's Presidency at the Council of the European Union (EU) takes place at a "difficult" time for Europe, said on Friday President of the European Commission Jean-Claude Juncker, stressing that the mandate "must ensure stability and offer hope."

"The Romanian Presidency will know several different episodes, but will also see effects in results," Juncker told the meeting of the College of Commissioners with Romanian President Klaus Iohannis, which took place at the Cotroceni Presidential Palace.

According to the European official, the Romanian Presidency will have to deal with the multi-annual financial framework and reach an agreement in principle on the "extremely difficult subject."

"We cannot afford to interrupt the process already launched. Otherwise too many programs could be affected," Juncker explained.

The post-Brexit stability of EU will be another issue that the Romanian Presidency will have to deal with.

"It's about the departure of the United Kingdom, which for me is a sad event, that Europe did not need...," he said, stressing that the Romanian Presidency will have to know to manage this difficult period.

Juncker also mentioned the elections for the European Parliament in May during the Romanian Presidency.

In his turn, Romanian President Klaus Iohannis said that the Presidency offers a good opportunity for the country to transpose its commitment to the European project in all its dimensions.

According to him, Romania fully shares the pro-European approach and that Romania's stand has always been and will continue to be a position endorsing the European project.

Iohannis promised that his country will make efforts to advance the European agenda based on consensus, as a honest mediator among all those interested, all participants, as its goal is to maintain unity and cohesion among member states, which is also reflected in the motto of Romania's Presidency - cohesion, a common European value.

Romania is exercising, between Jan. 1 to June 30, the Rotating Presidency of the EU Council for the first time since the accession to the EU 12 years ago, on Jan. 1, 2007.