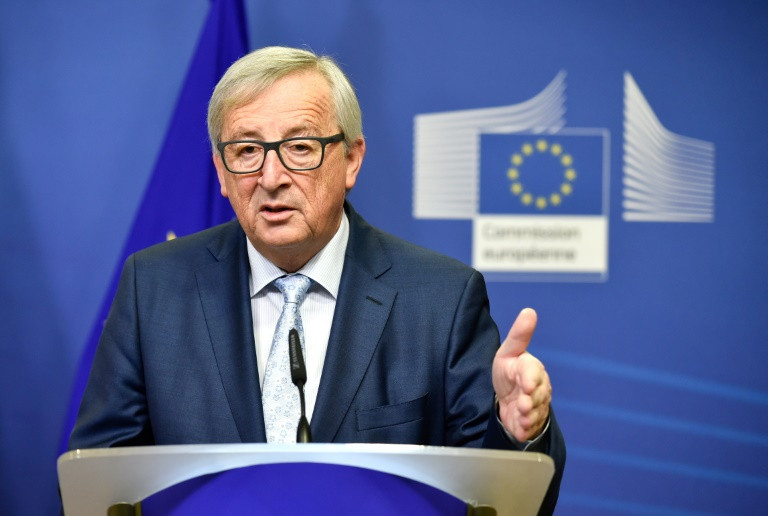 "We need more than one percent of European GDP, quite clearly, if we are to pursue European policies and fund them adequately," President of European Commission Jean Claude Juncker said. Photo: AFP/John Thys

European Commission chief Jean-Claude Juncker called Monday for nations to pay more into the EU budget after 2020 to fill a Brexit void and meet growing needs on defence, migration and climate change.

Brussels proposed increasing contributions from one percent of GDP (gross domestic product) in the 2014-2020 budget to 1.1 percent of GDP in the next multi-year budget following Britain's departure.

The current budget was set at 963 billion euros, or about 1.1 trillion dollars.

"We need more than one percent of European GDP, quite clearly, if we are to pursue European policies and fund them adequately," Juncker told a conference in Brussels.

Eurosceptic campaigners in Britain's June 2016 referendum called on voters to "take back control" of British money, arguing that London sent too much to Brussels and gained little in return.

Britain will leave the EU in March 2019 but has agreed to pay its financial contributions to the bloc until the current seven-year EU budget period expires at the end of 2020.

But EU Budget Commissioner Guenther Oettinger of Germany said that Britain's departure would leave a hole of 12-13 billion euros, and backed Juncker's call for a bigger share of Europe's GDP to go towards the EU.

"I'm not talking about two or three percent. Just 1.1 something. That is what I'm fighting for," Oettinger told the same conference.

Juncker warned against believing speculation that Britain might rethink its decision and hold another referendum, saying "Brexit will happen".

"Our working hypothesis is that our British friends will leave us on the morning of March 30, 2019 and so by then we have to find the means to respond to losing a lot of billions of euros," Juncker said.

In May, the Commission, the EU executive, is due to adopt a detailed proposal for the next multi-annual financial framework (MFF), which Oettinger said should be from 2021 until 2027.

Oettinger, whose country is the biggest contributor to the bloc's budget, said he would deliver his message when he visits European capitals in the next few months.

The European Parliament and the European Council, which groups the EU member states, will then negotiate the details before finally approving the budget, with unanimity required in the council.

Oettinger, who forecast a year of tough negotiations, warned that "big cuts" will be needed in some programmes even as his commission called for fresh revenue.

He said more money will also be needed to respond to natural disasters, which he warned will increase as a result of climate change. Southern Europe was plagued last year by forest fires.