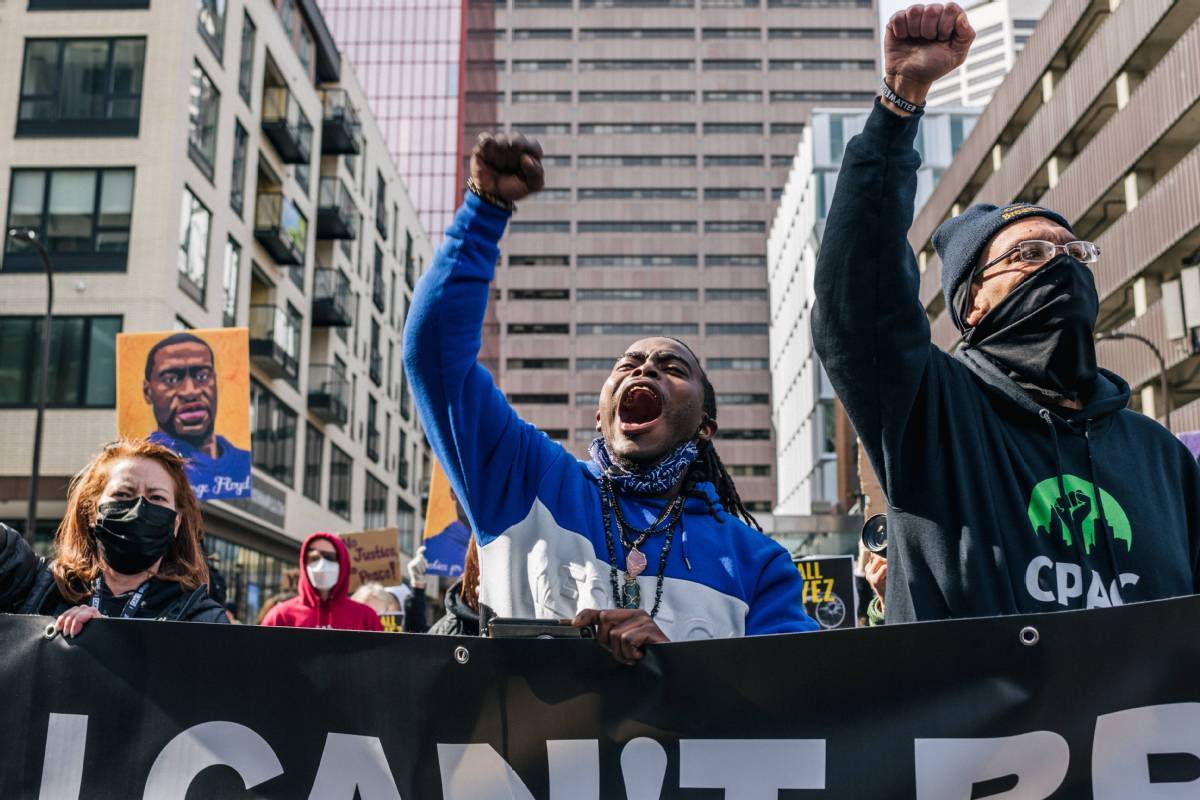 Protesters gather outside the Hennepin County Government Center in Minneapolis on Sunday, the day before opening statements in the trial of Derek Chauvin were to be heard. (Photo: AFP)

MINNEAPOLIS, Minnesota－The trial over the death of George Floyd was due to open on Monday with calls for justice ringing out from a prayer service held the day before in memory of the African American who died under the knee of a white police officer.

Opening arguments were scheduled to get underway in the murder trial of Derek Chauvin, the former police officer whose alleged killing of Floyd last May ignited protests against racism and police brutality across the United States.

Chauvin, a veteran of the Minneapolis Police Department, faces murder and manslaughter charges for his role in death of Floyd, 46, on May 25.

Floyd's cause of death is expected to be the central issue in the case, and a key piece of evidence is likely to be the bystander-filmed video of his death that went viral and triggered a summer of Black Lives Matter protests.

Chauvin was seen in the video kneeling on Floyd's neck for nearly nine minutes while arresting him for allegedly passing a counterfeit $20 bill.

While lying face down in the street, the handcuffed Floyd complains that he cannot breathe and calls out for his mother.

On Sunday night, hours before opening statements in the court, national civil rights leaders appeared at a prayer service alongside several of Floyd's family members. Several dozen attendees congregated in the benches at Greater Friendship Missionary Church, where preachers led worship, a choir sang and members of Floyd's family were joined by the Rev. Al Sharpton and Ben Crump, a civil rights attorney who also represents the Floyd family.

"I have a big hole right now in my heart. It can't be patched up. ... I need justice for George. We need a conviction," Floyd's brother Philonise Floyd told reporters in Minneapolis on Sunday. "I have faith that he will get convicted."

Opening arguments in the case were set to begin at 9 am local time in a heavily guarded Minneapolis courtroom for a trial being closely watched around the world.

The public has been banned from attending the trial because of the COVID-19 pandemic, but it is being livestreamed.

Proceedings are expected to last about a month.

Fifteen jurors have been selected, though Hennepin County Judge Peter Cahill was expected to drop one juror on Monday and proceed with 12 and two alternates.

The identities of the jurors will not be revealed until after the trial but some details are known.

They range in age from their 20s to their 60s and include a chemist, a social worker, an accountant and a nurse. Two are immigrants to the US.

One is a grandmother, one is recently married and one is a single mother of two teenage boys.

The jury selection process was complicated by the intensive pretrial publicity surrounding the case and all but one of the jurors said they had seen at least some of the arrest video.

"I'm thankful that it is a diverse jury," Paris Stevens, a cousin of Floyd who works as a nurse in North Carolina, said in a telephone interview. "I'm very anxious because you don't know what's going to happen, but I'm just glad that this process is starting."

A conviction on any of the charges－second-degree murder, third-degree murder or manslaughter－will require the jury to return a unanimous verdict.

Legal experts have noted that US police officers have almost never been found criminally liable for killing a citizen. Chauvin's lawyers have said they will try to convince the jury that the fentanyl, an opioid painkiller, found in Floyd's blood by the medical examiner played a bigger role in killing Floyd than the officer's restraint.

Eric Nelson, Chauvin's attorney, asked to have the trial delayed and moved out of Minneapolis because of a March 12 announcement that the city had reached a $27 million "wrongful death" settlement with the Floyd family.

Three other former police officers－Tou Thao, Thomas Lane, and J. Alexander Kueng－also face charges in connection with Floyd's death. They are to be tried separately later in the year.