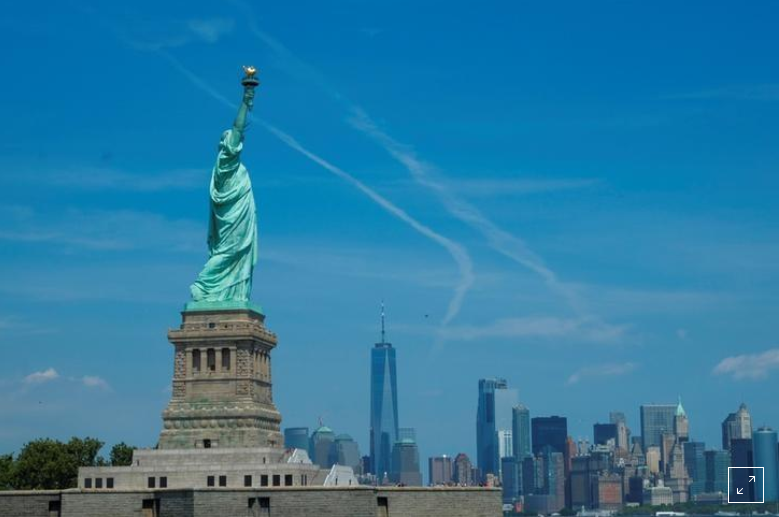 People visit the Liberty State Island as Lower Manhattan is seen at the background in New York, US, August 17, 2017. Photo: Reuters/Eduardo Munoz

The US Justice Department said it was asking for the records from 23 jurisdictions, including America’s three largest cities - New York, Los Angeles and Chicago - as well as three states, California, Illinois and Oregon.

“If these jurisdictions fail to respond to our request, fail to respond completely or fail to respond in a timely manner, we will exercise our lawful authorities and issue subpoenas for the information,” said a senior Justice Department official, briefing reporters on condition of anonymity.

The Republican president’s fight with the Democratic-governed sanctuary cities, an issue that appeals to his hard-line conservative supporters, began just days after he took office last year when he signed an executive order saying he would block funding to municipalities that failed to cooperate with federal immigration authorities. The order has since been blocked by a federal court.

The sanctuary cities issue is part of Trump’s broader crackdown on illegal immigrants living in the United States. As a candidate, he threatened to deport all roughly 11 million of them.

The administration has accused sanctuary cities of violating a federal law that requires states and local authorities to share information about people they arrest with the US Immigration and Customs Enforcement (ICE) agency.

Certain sanctuary cities such as Philadelphia were not on the Justice Department’s list due to pending litigation.

The Justice Department said it has previously contacted all of the jurisdictions on its list but said it is not satisfied that they are in compliance with the law.

In the Chicago case, a federal judge issued a nationwide injunction barring the Justice Department from withholding what is known as Byrne JAG grant money to sanctuary cities on the grounds that its action was likely unconstitutional. This funding is typically used to help local police improve crime-fighting techniques, buy equipment and assist crime victims.

The Justice Department is appealing that ruling.

Some cities have said compliance as described by the Justice department is not required under the law at issue and that they will honor requests from immigration authorities when accompanied by a criminal warrant.